I say as much as I can with my paintings, and whatever I can't say with the art I say with words.

Brown freely admits that he is a man of few words but when an illustrator creates visuals using pencil on paper with cut construction paper and wood and just a dab of digital tweaking as skillfully as he does, who needs words?!  To give intimacy to the story he handlettered the word balloons.

The overall sepia tones give credence to the book being about bears and for bears.  Brown's technique of varying image sizes and character placement on the pages heightens the interest and general flow of the tale.  His gift of injecting humor through dialogue and facial expressions is the shining touch. 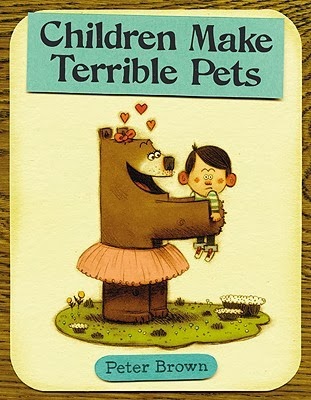 Beginning and concluding with endpapers that give clues as to the story's plot line, readers are introduced to Lucy, a charming young bear, in a pink tutu twirling through the woods as Children Make Terrible Pets (Little, Brown Books for Young Readers) starts.  Using her enhanced smelling abilities she discovers the cutest critter in the WHOLE forest who can only emit a squeak every so often, thus she names him Squeaker.  Her Mom warns her that children make terrible pets but Lucy gets to keep him on one condition---he is her sole responsibility.

From that moment on they are inseparable; playing together, eating together, and napping together.  On the flip side potty training does not go well, furniture ends up ruined and in fact, Squeaker has a knack for being a problem just about everywhere he goes.  Lucy is at her wits end when disaster strikes---Squeaker disappears.  Her nose comes to the rescue leading Lucy to the conclusion, after much thinking, that her Mom was right about children as pets.  Lesson learned...well almost.  Brown throws in one more hilarious twist at the end that will have readers howling and rolling on the floor. 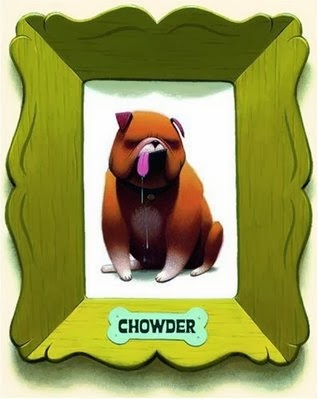 After reading Children Make Terrible Pets I just had to go back and reread another of Peter Brown's books in our library media center, Chowder.  Quirky is an understatement when it comes to this bulldog.  It is just as hilarious as it was the first time that I read it.  I have since discovered that Chowder has his own web site.
Just click on his name to enjoy the fun.