Different cultures have different customs relative to personal space.  Greetings, goodbyes, and signs of affection vary from place to place and from person to person in those places.  Some individuals are comfortable with another reaching out to touch them as a sign of goodwill and others are not.  Sometimes the form of those contacts in greeting, in goodbyes, and with caring vary from a shoulder touch to a fist bump, pinkie shakes or an embrace.

Spending your days as an educator with children of all ages, you find creative ways to express welcome, compassion, praise and farewell, being respective of each individual's personal space.  (Mrs. Piggly-Wiggly, a pig puppet, often helped me read aloud and turn book pages with my kindergarten and first grade students.  Invariably as they were leaving, many of the students, knowing full well she was a puppet, gave her a hug as they went out the door.)  Don't Hug Doug (He Doesn't Like It) (Putnam, G.P. Putnam's Sons, an imprint of Penguin Random House LLC, January 26, 2021) written by Carrie Finison with illustrations by Daniel Wiseman focuses with honesty on those children, people, who simply don't want others to hug them. 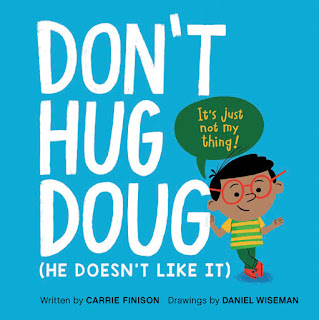 You can hug a pug.
(Awww!)
You can hug a bug.
(Maybe . . .)
Or a slug.
(Ewww!)
But don't hug Doug.
He doesn't like it.
With politeness, Doug asks not to be hugged.  He does not like to be hugged.  It's not that he doesn't like you, he does.  Hugs are too much of everything he avoids.
There are things Doug likes.  He has an assortment of collections he enjoys.  He is especially fond of playing a harmonica with other harmonica players.
You might look at Doug and think this boy needs a hug.  Don't hug Doug.  It does not matter what the occasion is or the kind of hug it is.  Doug is not a hugger.
There is one, only one, kind of hug he likes from one special person.  Who gives this hug?  When does he get this hug?  If you are not this person and if it is not the right time of day, don't give Doug a hug.  There are other individuals, beings, you can hug, but you need to ask permission first.  This is a nod to their dignity.
What can you do if, like Doug, people don't want hugs?  Like Doug, they might like high fives.  Doug is a professional high fiver!  He has perfected all kinds of high fives like the
elbow five, piggy five and spinny five.
How about you?
One of the first things you notice about the writing of this book is the upbeat narrative.  Carrie Finison exhibits great care in her word choices.  She supplies multiple examples in support of and to reinforce Doug's desires using rhyming and repetition.  In Doug's own words, after a series of statements, he jovially adds exactly what he means.  Here is a passage.
Can you hug Doug's
pet potbellied pig?
Ask!
"Can we hug your pet potbellied pig?"
Yes, she loves hugs!
But be gentle.
She's a little scared
of strangers.
It's easy to see when looking at the open and matching dust jacket and book case, the drawings, artwork, of Daniel Wiseman highly complement the story.  The buoyant color palette, body postures, and facial expressions are welcoming and warm.  To the left, on the back, a page of interior illustrations is featured.  They show Doug in four different situations.  The narrator is asking if these four kinds of hugs are okay and Doug, with his usual happy disposition, replies.  The backgrounds for all four shift from golden yellow to vibrant grass green, forest green, and then purple.
On the opening endpapers is a bold green with bright, dark yellow polka-dots.  The same color combination is used on the closing endpapers.  This time it is horizontal stripes.  The basic design shown on the front of the jacket and case is replicated on the title page.  This time the canvas is a crisp white and the title text is blue.  Doug has another statement to make.
These digital drawings vary in size.  Some span two pages, others are grouped in panels on a single page, and sometimes full pages, edge to edge.  With every page turn you feel your happiness growing as you experience the merriment shown on the characters' faces and how they react to Doug and other beings. (Well, there is the slug grimace, though.)  Don't you just love Doug's red glasses?
The other children and adults mirror a variety of races and ages.  Frankenstein even makes an appearance.  There are animals and robots, too.  The dialogue, other than the narrator, is shown in speech balloons.
One of my many favorite illustrations is on a full page.  Doug is shown kneeling as he makes a drawing of his pet potbellied pig using colors from his chalk collection.  He is wearing his green and yellow-striped shirt, green pants, and miss-matched socks from his sock collection hanging on the wall behind him.  On his purple carpet are scattered pieces of chalk, his harmonica, a game controller, and a book titled ROCKS OF THE WORLD.  To the left of his sock collection is shelving with cubbies for his rocks.
You know when you read a book and it just feels right?  This book, Don't Hug Doug (He Doesn't Like It) written by Carrie Finison with drawings by Daniel Wiseman, is one of those books.  This is a book to share with everyone, individuals like Doug and others who need to understand the wishes of others.  It will promote healthy discussions.  This is a book about compassion and individuality you'll want to have in your professional and personal collections.
To learn more about Carrie Finison and Daniel Wiseman and their other work, please access their respective websites by following the link attached to their names.  At Carrie Finison's site is a list of stops on her virtual tour for this book.  A couple are storytimes in the future.  Carrie Finison has accounts on Facebook, Instagram, and Twitter.  Daniel Wiseman has accounts on Facebook, Instagram, and Twitter.
Posted by Xena's Mom at 1:59 PM