Many learn of him during religion classes.  His persona grows further when learner becomes teacher.  He was a man, a prophet of power.  He lived thousands of years ago, but still holds a prominent place in religious teachings and celebrations.  He is Elijah.

This year the Jewish spring holiday of Passover begins on March 27, 2021.  It commemorates the Exodus of Jewish people from slavery in ancient Egypt.  In The Passover Guest (Neal Porter Books, Holiday House, January 19, 2021) written by Susan Kusel with illustrations by Sean Rubin, readers step back in time to experience the reverent wonder of this holiday and Elijah's place in it. 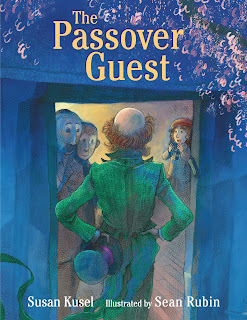