When Human Eyes Are Absent

In winter, their presence is easily noticed.  New snow is patterned with paths made by their prints.  They burrow and scoop out shelter under and among landscaping to stay warm during the chilly nights.  They dine on any available edible.

For the most part, they move in silence in any season when humans are tucked inside their homes asleep.  What they do after their essential needs are met is not as easily identified.  The impressions left in the snow, mud or dirt, sometimes indicate playful antics.  The Midnight Fair (Candlewick Press, February 2, 2021) written (conceived) by Gideon Sterer with illustrations by Mariachiara Di Giorgio is a marvelous wordless story of an extraordinary nighttime adventures of forest animals. 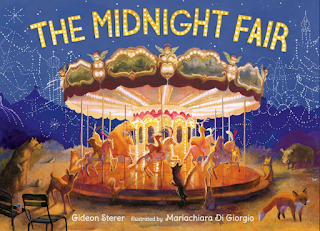 As clouds gather and sunset casts a golden glow, a caravan rolls into a large meadow bordered by woodlands.  Behind the trees and tall grass, animals gather and watch.  The rides and concession stands are quickly assembled.  In darkness lights, loud noises, and laughter fill the air.  From the shadows, the animals still watch.
After the attendees and caretaker leave, the only light is from the glowing eyes of animals cautiously walking from the forest and entering the fair.  Clever climbing raccoons pull the main electricity lever.  The fair comes alive . . . again.
Spinning, swinging, and bumping rides are ridden, confections and snacks are consumed, and games are played and won.  Music floats up, down, and around.  Not a word is spoken, but every creature is finding fun.
All too soon, the sky in the east lightens, proclaiming the upcoming sunrise.  At the fair, the excitement lessens, and clean-up begins.  At home, the caretaker gets ready for his day, arriving as others slip away.  In the softness of dawn, there are suspicious surprises for the caretaker, and rejoicing and much-needed rest for the animals of the forest.  This tale has one, wonderful final twist.
As the narrative unfolds author Gideon Sterer takes readers slowly from curiosity to cunning, and then to sustained elation until the break of dawn.  In this story, we shed what we think we know about animals, replacing it with an enormous imaginative leap.  The manner in which Gideon Sterer presents the events during this midnight magic resonates universally.  It reaches all readers; for who among us has not been enchanted by the dream of one transformative night?
This book with these images created by Mariachiara Di Giorgio is to be savored over and over, pausing to study each one.  Look carefully at the front, right, of the matching dust jacket and book case.  The starry constellations, outlines of buildings, tents, and rides at the fair, in the background have formed an enchanting place.  The music from the carousel floats out into the night air as animals from the forest ride and watch.  Who wouldn't want to be there with them? (The outlines, title text and entire carousel display are varnished on the front.)
To the left, on the back, the pinpoint outlines continue as a full moon peeks out from behind a tree on the left.  Silhouettes of animals in a line stretch from the TICKETS booth, as a resident wild canine accepts payment.  The opening and closing endpapers figure prominently in the pictorial interpretation of this story.  On the first set the open meadow is filling with the caravan of trucks each carrying fair equipment.  Behind a row of trees and grass in the foreground animals watch.  The final set of endpapers has the same illustration except now the meadow is nearly empty and only a portion of one trailer is visible, vanishing on the left.
The artwork for this book was rendered
in watercolor, gouache, and colored pencil.
These mediums portray a realm in eloquent detail, textured and inviting.  The double page illustration for the verso and title pages continues the story with the setup of the fair as the animals gaze at the activity in secret.  Mariachiara Di Giorgio uses a series of panels framed in white lines to supply pacing.  Two square images might be paired with a horizontal picture on a single page or two horizontal images might be spread across two pages together, one on top of the other.  Double-page pictures provide readers with gasp-worthy scenes like when the fair, now back to life, is spread before the animals as they enter or when we look down on animals spinning in saucers.  Every element in these visuals is worthy of study, humor is highly evident.  You'll note the raccoons working to turn on the main switch, the method of payment used by the animals, the porcupine with sweet treats stuck to its quills, and the animals riding the roller coaster, arms in the air as it cascades down.
There is also a story within the story here.  Without disclosing too much, careful readers will watch as a wolf wins a particular prize at the ring toss.  We see him throughout the illustrations, still holding his reward.  Remember when it was mentioned we need to suspend what we think we know about animals?
One of my many, many favorite pictures is when the animals are watching humans at the fair on this opening night.  In the bright, but muted, lights the midway spreads across two pages.  In much darker colors, shadows, leaves, berries and seeds border the top and the right side in the foreground.  On the right a raccoon is gathering branches and stems, pinecones, and mushrooms.  From the left side a bear is watching.  Next to the bear are two rabbits (hares) with only their ears visible from the bottom of the page.  They are all waiting.  These animals are very close to the reader.
In case you have ever wondered what wild animals do when humans are not present, this book, The Midnight Fair written (conceived) by Gideon Sterer with artwork by Mariachiara Di Giorgio, is a gorgeous window into possibility.  This story and every illustration ask readers to participate and enjoy each moment.  You will want to have this breathtaking, inventive book in your professional collections as well as on your personal bookshelves.  This title is one you will want to share often, gifting it so others can find joy in its magic.
To learn more about Gideon Sterer and Mariachiara Di Giorgio, please follow the link attached to their names to access their respective websites.  Gideon Sterer has accounts on Instagram and Twitter.  Mariachiara Di Giorgio has an account on Facebook.  This book is featured at Seven Impossible Things Before Breakfast by author, reviewer, and blogger Julie Danielson.  Mariachiara Di Giorgio is highlighted at Let's Talk Picture Books in a 2017 interview by Mel Schuit.
Posted by Xena's Mom at 12:50 PM