With The Eyes Of Your Mind

It is defined by Merriam-Webster as:

the act or power of forming a mental image of something not present to the senses or never before wholly perceived in reality.

This gift given to each of us is heartily embraced by children every single day.  In their minds, there is much more than meets the eye.  They see beyond what is and wonder about what can be.
Time and time again, their astounding ability to think beyond borders compels adults around them to realign their own reflections and directions.  Milo Imagines the World (Putnam, G. P. Putnam's Sons, an imprint of Penguin Random House LLC, February 2, 2021) written by Matt de la Pena with pictures by Christian Robinson is greater than a ride on a subway.  It's an exploration of first impressions and a reexamination of those very perceptions. 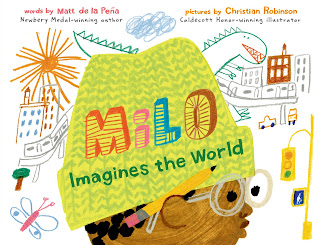