Depending on the number of days you've been fortunate to reside on this planet, you have at least once wished you could go back in time.  You may want to dial back to relive a magical moment, see a loved one who died, or right a wrong. As each decade passes you miss certain physical advantages of youth. 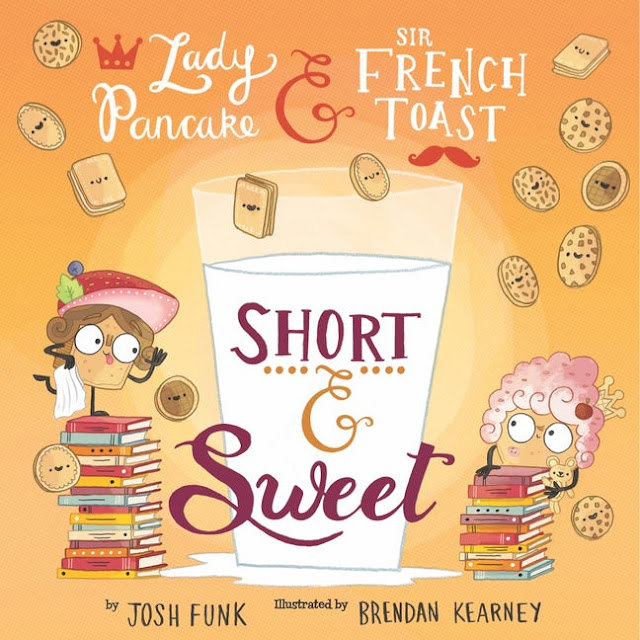 Still in the fridge and behind the Swiss chard,

in their apartment on Crust Boulevard,

As they finished their work, each of them noticed a striking difference in their appearance.  They were going stale! Their newly acquired friend, Baron von Waffle confirmed their worst fears, but he also had a solution.  He led them to Professor Biscotti's lab.  It seemed she had a

Much shorter, the duo scampered through Bran Canyon, over, down, and toward enticing edible places.  Eventually, they discovered something better than Pasta Playgroud.  It was the library.  Meanwhile, back at Professor Biscotti's lab, she and Baron von Waffle were mixing up a savory strategy.  As we all known, the best-laid plans can sometimes be a recipe for disaster.

Tension mounted between the adults. Baron von Waffle finally noticed a tasty trick for success can be used more than once.  Listen.  Is that the sounds of Born To Fun or maybe Carrot Clemons is soloing in Crumbleland?

In a word, this title (as are the previous publications in the series) is fun with a capital F.  You'll dash from one scrumptious second to the next relishing the word play and beautifully, balanced beat supplied by the ingenuity of author Josh Funk.  Every rhyming couplet carries the plot forward to its final harmonious happening.  From the boundaries of a refrigerator Josh Funk has presented a bounty of choice cuisine to enjoy again and again.  Here is a passage.

"Phew! Are we safe now?" asked Toast at Pie Pier.

Pancake responded, "No waffles 'round here."

Then in the distance they spotted Limes Square.

[Note: I am working with a digital copy.]

Readers will hardly be able to contain their smiles and laughter when they first see the front of the dust jacket of this book.  The breakfast buddies are considerably smaller, one carrying a baby blanket and the other a teddy bear.  They are each near a stack of books with puns galore in the titles. This is a foreshadowing of an interior image.  To have the glass of milk, partially spilled, with the cascading cookies about them is a notable nod to the title.

The opening and closing endpapers are a pattern of assorted fruits, vegetables, and desserts found in a refrigerator.  Maple syrup is highlighted as is a juice box.  This is done in several shades of pale red.

There is little doubt readers will be pausing at every single page to ponder the multitude of clever details Brendan Kearney includes in his illustrations.  Everything is food related.  The sofa in Lady Pancake's and Sir French Toast's home is fashioned from bread slices as the back and a sub sandwich as the seat.  Professor Biscotti's DE-spoiling ray is pure genius.

The size of the visuals switches from two-page pictures to full-page images, and then to a series of smaller illustrations on one or two pages.  The shifts in size place emphasis on the pacing.  At the close of the book is a spectacular double-page wordless picture with another wordless vertical gatefold disclosing the wonder to be found in a fridge created by this author and this illustrator.

The showcased food is highly animated with expressive facial features, and the signature stick-style legs and arms.  The hair and hats on the main characters are perfection.  Brendan Kearney uses a blend of bright and pastel colors.  Sometimes background elements fade to etching to draw our attention to the main characters.

One of my many, many favorite illustrations is on a single page.  It's when we first meet Professor Biscotti and see her DE-spoiling ray.  The ray itself (which I won't describe) sits on a machine made of a chunk of cheese with halved orange slices along the bottom, red licorice, and a lollipop.  The assistants to the professor are a group of cookies, all kinds of cookies.  The professor with a large dollop of chocolate curled around her face for hair is kneeling next to the machine with a wrench in her hand.  She is wearing a lab coat and round-rimmed glasses.

You will smile for hours after reading Lady Pancake & Sir French Toast Short & Sweet by Josh Funk with illustrations by Brendan Kearney, and then you'll read it again.  The challenge faced by the children and the adults will further connect these companions to themselves and to readers.  Readers will find themselves desiring to eat breakfast, conceive their own rhyming food spaces, and think of puny book titles. You will surely want a copy of this book for your personal and professional collections to complete the set of fab four.

To discover more about Josh Funk and Brendan Kearney and their other work, please access their respective websites by following the links attached to their names.  Josh Funk has accounts on Facebook, Instagram, and Twitter.  Brendan Kearney has accounts on Facebook, Instagram, and Twitter.  There is a scheduled virtual launch party at An Unlikely Story Bookstore & Cafe for September 1, 2020 at 7pm.  Please follow the link to register.  Enjoy the book trailer and be sure to visit other sites on this tour for numerous interviews and insights. 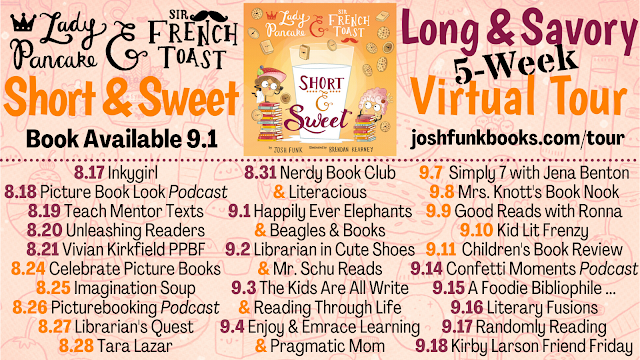