Having grown up in the Midwest, most people are familiar with one particular tragic historical event.  In fact, it's probably covered in numerous classrooms throughout the United States for its significance as a life-changing disaster and for how people responded to it.  It lasted for more than thirty agonizing hours.

It happened in Chicago, Illinois in the month of October 1871.  History Comics: The Great Chicago Fire: Rising From The Ashes (First Second, an imprint of Roaring Brook Press, June 30, 2020) written by Kate Hannigan with art by Alex Graudins is one of the first volumes in a new graphic novel series of narrative nonfiction.  You'll have to remind yourself to breathe as you race from one horrific moment to the next with siblings separated from their parents.  Facts are deftly woven into the thoughtful narrative and stellar artwork. 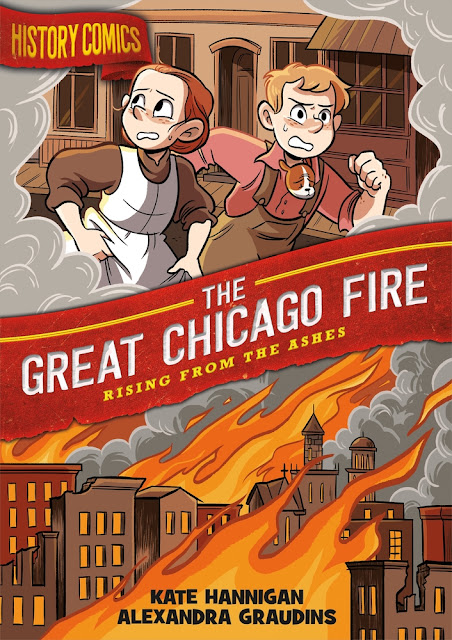 It's about eight o'clock p.m. on October 8, 1871 in Chicago, Illinois.  J.P. (John Patrick) and Franny are gathering rambunctious puppies who need to return with their visiting aunt and uncle,  Both the children's family and their neighbor Kate O'Leary are to receive a puppy when they are old enough to be separated from their mother.  As their relatives leave and the children do evening chores, there is the smell of smoke in the air.  To the children's dismay, they also discover one of the puppies has been left behind by their Aunt Maggie and Uncle Daniel.  They race after the retreating wagon trying to catch it.

There is currently a drought in the Midwest.  Prior to this Sunday, fire crews battled twenty-four fires in less than a week and they just completed an eighteen-hour shift.  To this day there are still discrepancies in whether the fire alarm call box was used in a timely manner.  By the time the alert is sounded, it is too late.  The fire is out of control.  The children cannot return home.

Crowds of people along with the children and the pup they've named Lucky are fleeing toward the business district.  They believe they will be safe on the other side of the river.  Rumors are already spreading about the cause of the fire.  Sentiments against the Irish, Catholics, and immigrants run high.  The most prevalent theory is the fire originated in Kate O'Leary's barn as she was milking her cow.  To everyone's horror the fire jumps the river.

It is as if the fire is alive chasing down victims.  Everyone regardless of their status or station in life is in peril.  Think about this---

To add to the confusion the children are facing, Lucky escapes from J. P.'s grasp. (When J.P. finally finds Lucky, this affords us the opportunity to see the entire city on fire.) Prominent public places are being destroyed including the city's waterworks.  Suddenly there is no water, along with no gas for the city lights.  In darkness, people make their way toward Lake Michigan.  Like many tragedies, the Chicago Fire brings out the best and worst in people.  Franny and J.P. walked and searched for their parents among the multitude of homeless people all day Monday until they reached Lincoln Park late that evening.  Finally, it starts to rain.

In the subsequent pages we, through Franny and J.P., see how the city and the country respond to the fire and the city's inhabitants.  We are taken twenty-two years in the future to June 21, 1893 in an enlightening final twenty-two pages.  It is in the evening at the World's Columbian Exposition.  Through the extended families of J. P. and Franny we discover how building materials, architecture, engineering, the fire department and firemen are changed by the Great Chicago Fire.  We are also privy to the wonders present at the World Columbian Exposition.

Regardless of the number of times you read this book, you are fascinated, and captivated each and every time.  Kate Hannigan, through meticulous research, presents a gripping story with conversations between the characters and other residents of the city.  During the course of these conversations and encounters, historical figures are introduced with additional information about them.  At various points during the events, in keeping with the flow of the story, more facts are presented about conditions before the fire, how fire alarms were sounded, prejudice against certain groups, different theories about the fire's origination, how Mrs. O'Leary and her cow were stigmatized, then and in the future, specific buildings and their collapse and the response from people everywhere, even Queen Victoria and the people of Britain.  The details Kate Hannigan includes in the portion about the World Columbian Exposition are impressive.  Here is a passage with conversation and historical additions.

We've got to find Lucky's mother soon.  He's gone too long without milk.

Trying to contain the blaze, the mayor okayed Civil War veteran General Philip Sheridan to blow up strategic buildings in the fire's path.

Winds whipped the flames, and the fire advanced anyway.

Featuring the children above the title banner with the blazing fire beneath them is certain to grab readers' attention.  Careful readers will see Lucky tucked inside J. P.'s shirt.  The facial expressions on the children convey the urgency of their situation.  This is the first glimpse we get into the historically accurate look at the buildings, and period clothing depicted throughout the book.  To the left, on the back, is an interior image of J. P. looking down from atop a building at the expanse of the blaze.  On my paperback copy, this is where the blurb is placed.

A double-page image in sepia tones gives readers a bird's eye view of the city, fire, and Lake Michigan on the title page.  Several wordless horizontal panels on two pages begin the visual interpretation by artist Alex Graudins.  Page turn by page turn the panels vary in size to accentuate the pacing of the narrative.  Sometimes an added image will be inserted within another illustration for clarification. At times a single illustration will be shown in several panels.  Other times portions of newspapers or posters or maps are shown.

Conversations are displayed in speech bubbles.  The extra historical facts are placed on old-looking paper along the top or bottom of an image.  Sound effects, body postures, and looks on the characters' faces add to the emotions of each minute.

One of my many, many favorite images is a half-page panel at the bottom of a page.  It shows Franny and J. P. walking among a crowd of people from various ethnic and social backgrounds.   Some are carrying the only possessions they managed to save.  In the distance you can see smoke and flames.  In the lower, right-hand corner a man with a chicken on his shoulder is saying:

We'll never stay ahead of the fire devils!

This is shown in a speech bubble which breaks a white frame drawn around his upper body and head to draw our attention to him.

You'll want to plan on having multiple copies of History Comics: The Great Chicago Fire: Rising From The Ashes written by Kate Hannigan with art by Alex Graudins for your professional collections.  Readers will reread this and then pass it to other readers.  For history connoisseurs, this is a must-have title for your personal bookshelves.  At the close of the book is an author's note, timeline, map of the city today with marked places of interest, an article titled Great Fire Sites to Visit in Chicago Today, and another titled Fast Facts About Chicago & the Great Fire and a bibliography and resources including books, museums, newspapers, and websites.