Their earliest ancestors can be traced back at least 55 million years and are said to have been about the size of a present-day tapir.  Today despite being the largest land mammal on our planet, their numbers are diminishing.  Their existence is threatened by loss of habitat and by poaching for their tusks.  As a keystone specie multiple ecosystems rely on their presence. 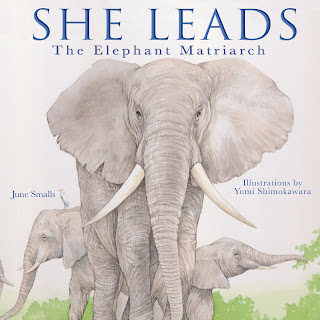 In a powerful new book, readers explore the realm of African elephants.  She Leads: The Elephant Matriarch (Familius LLC, May 26, 2020) written by June Smalls with illustrations by Yumi Shimokawara takes readers on a remarkable journey experiencing the many roles of a female elephant chosen to direct her herd.  We come to understand like all good leaders, she is first and foremost a teacher paving the way for future generations to thrive.

She is the queen.  The matriarch.

Following this first of thirteen statements about the attributes of an elephant matriarch, additional supporting facts and explanations are placed under it.  This information supplies a more in-depth look at each of the characteristics sometimes off to the side of the initial declarative sentence.  After the above-noted words, for example, a definition of matriarchal is given.  We learn this is often the oldest female elephant.  We are told female elephants are named cows.

Elephants live for generations in the same group unless it tends to get too large.  Male elephants, bulls, stay with the group until they are about thirteen years old.  The matriarch will show her family where to locate food and water.  Per elephant, per day, they

can consume up to 300 pounds of food.

That's a lot of food!  In their minds, they maintain a map of places to find water.  They are known to use any means they have to dig it up.

When a new elephant is born after twenty-two months, all the females join in its care and protection.  Elephants welcome encounters with other groups, but are quick to protect babies when danger approaches, placing them in the center of the herd.  The loss of a mother to a baby two years old or younger is devastating.  If they are older, other females are likely to adopt them

Each baby learns from the older elephants.  They mimic their behaviors such as learning to use their trunks.  It takes considerable practice to use those 100,000 muscles when strength or gentleness are needed.  When the matriarch dies, elephants have been observed performing certain mourning rituals, even returning years later to touch the bones.  The new leader, an elder female, puts her learned talents to use.  Elephants have been known to communicate with other elephants over

The matriarch speaks and others listen.


The narrative as written by June Smalls has large appeal.  For the youngest of readers, you may want to use the short narrative phrases in bold print initially.  If they have questions, you can move to the paragraph in smaller font on the same page.  This is a wonderful technique inviting multiple readings.  June Smalls knows her intended audience providing those facts which will satisfy their curiosity but also initiate further research.  Here is a sample sentence and the accompanying paragraph.

And who their friends are.

Sometimes those groups that had split apart will meet in the same areas and forage for food together.  These meetings are like a family reunion.  Everyone goes back with their own group when they leave.


The artwork of Yumi Shimokawara seen on the open and matching dust jacket and book case is magnificent.  Her elephant portraits here, and throughout the title, are exquisite in their detail.  The matriarch heading straight at readers on the front is majestic and formidable.  The smaller elephants on the side of her are exhibiting natural behaviors.

To the left, on the back, we are very close to an adult female grasping grass in her trunk and bringing it to her mouth.  She is placed in the upper, right-hand corner with only a large portion of her head showing.  In the lower, left-hand corner a smaller elephant reaches for a leafy branch.  The words here read:

She is the queen.  The matriarch.
She leads her daughters
and their daughters.

One day you
will lead.

In a stunning design decision, in black and white, on the opening and closing endpapers is a close-up view of elephant skin.  It is also opposite the initial title page and the final image.  A female elephant is shown on both title pages as first a leader and then as parent teacher.

For many of the images white space or a lighter canvas act as an additional element.  Greenery figures prominently in several scenes.  The darkest background is for the loss of the matriarch.  Nearly everything is in hues of deep blue and gray.

The image sizes vary in tandem with the text, elevating it for readers and bringing us into the moment.  Sometimes only a portion of the matriarch is visible making her presence as grand as it is.  White egrets, common companions, are placed in several of the illustrations.

One of my many favorite images is a series of three smaller pictures on two pages.  It shows younger elephants at play.  Each illustration has the animals on some grass, but they are otherwise surrounded by white space.  In the first, one elephant appears to be climbing on the other one.  In another picture a single elephant is waving a stick with one leg lifted.  In the third illustration an elephant is happily moving quickly with their trunk in the air as a bird flies near it.


This book, She Leads: The Elephant Matriarch written by June Smalls with illustrations by Yumi Shimokawara, focusing on the prominent female is informative and eloquent.  It clearly demonstrates in carefully selected facts and beautiful artwork the value of a female leader and her capabilities in the elephant world but will also instill courage in readers.  This will make a wonderful title to use with How To Be An Elephant: Growing Up in the African Wild (David Macaulay Studio, Roaring Brook Press, September 19, 2017) by Katherine Roy, The Elephant (Enchanted Lion Books, September 25, 2018) by Jenni Desmond, The Truth About Elephants (Seriously Funny Facts About Your Favorite Animals) (A Neal Porter Book, Roaring Brook Press, November 27, 2018) by Maxwell Eaton III and If Elephants Disappeared (Roaring Brook Press, August 17, 2019) by Lily Williams.  I highly recommend this title for your personal and professional collections.

To learn more about June Smalls and her other work, please access her website by following the link attached to her name.  June Smalls has accounts on Facebook, Instagram, and Twitter.  At a publisher's website there is an educator's guide and several views of interior images.  There are author interviews at KidLit411, author Cynthia Mackey's site, Picture Book Spotlight and Critter Lit.
Posted by Xena's Mom at 9:37 PM