Searching For The Night

Each month we observers of the night skies are given a gift.  This gift is courtesy of the moon who hides her glow in her new phase.  She goes dark so we can see the splendor of the starry expanses.  Constellations and paths of twinkling lights are a wondrous sight.

For those living in or near cities, even when the moon is new, they are unable to see all the night sky offers.  Even in the middle of the night, there are too many lights shining.  There are streetlights, lights from signs for businesses, and parking lot lights to name a few.  Lights Out (Creative Editions, August 18, 2020) written by Marsha Diane Arnold with illustrations by Susan Reagan addresses in an enchanting tale the real phenomenon of light pollution. 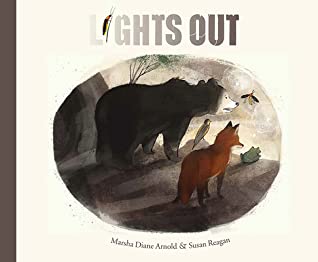 Little Fox peeks out from her den.

Beetle flits above her.

"Lights out!" she barks.

But the lights stay on.

There is not a place Fox and Beetle look without light.  It is as if night and the darkness it brings have disappeared.  They decide Night is still somewhere, lost, but needs to be found.

The duo begins their search as Songbird struggles with the lack of darkness.  There is no map of stars for her to follow.  She joins the search.  Frog cannot begin his songs without darkness.  He leaps along with the others.

On the top of a mountain, Bear sees Fox, Beetle, Songbird and Frog seeking the Dark of Night.  Bear follows the others for reasons of his own.  There are lights everyplace they look.  No place it seems is untouched by light.  By and by, they arrive at the shore of the sea.

Here tiny turtles have hatched from their eggs.  They are not sure where to go.  The larger animals guide them toward the water.  Songbird and Beetle from the air encourage the babies to come to the sea.  And then . . . against the deeper dark waters in the darkening sky, a bit of magic happens.  Beetle has been harboring a secret.  In helping others to safety, the five creatures swim toward their hearts' desire.

Much like the pieces in a finely stitched quilt author Marsha Diane Arnold with each page turn in this title discloses a poetic portion of her story, moving toward a breathtaking conclusion.  Some conversation is blended in the descriptive observations.  Repetition figures in the rhythm, acting as a connection.  It is important to note darkness, dark, and night are written with a capital letter.  Marsha Diane Arnold makes them characters.  Here is a passage.

Where is Darkness? Where is Night,

where coyotes sing, owls hunt, and

where foxes move through the dark

and beetles are more than beetles?

Muted, sepia-toned colors used throughout the book are introduced on the front, right side, of the open dust jacket.  Here, too, we meet the characters of Fox, Beetle, Songbird, Frog and Bear as they look for the Dark of the Night.  Notice Beetle, and a twig forming the "i" in the title.  To the left, on the back, Beetle, and the twig on horizontally positioned over the ISBN.  Above them on the canvas of cream, in a small circle, Beetle's secret is disclosed.  Continuing with the cream background and wide, brown spine, the book case features Beetle's secret on the back.  On the front the tiny turtles in a small image swim toward the white light of the moon.

Each illustration by Susan Reagan is an exquisite depiction of setting and the individual characters.  You will find yourself pausing at each page turn to savor the details.  Multiple perspectives are shown in each scene.  The sizes of the images accentuate the narrative moving from single-page pictures to dramatic double-page visuals.  Light and shadow are masterfully portrayed.

One of my many, many favorite illustrations is for the first mention of Frog.  It spans two pages.  In the foreground among reeds and water a group of frogs are still.  Frog is larger than the others and closer to the reader.  On the left a car shines its lights on the water.  On the water, behind the car, a boat glides forward shining a spotlight on the water.  From the left, across the gutter and to the far right is an arched bridge, cars traveling on the highway at its top, and streetlights like white globes evenly spaced glow.  Another boat on the far right, also shines a spotlight on the water.  (I also need to state I gasped at a two-page picture toward the end with a single word on the page.)

This book, Lights Out written by Marsha Diane Arnold with artwork by Susan Reagan is a plea to lessen light pollution, and a lyrical tribute to the Dark of Night.  In an author's note prior to the start of the narrative, Marsha Diane Arnold talks about light pollution, the Dark Sky Association, and International Dark-Sky Week.  I highly recommend this title for your professional and personal collections.