Every time we tell a story to a friend, we are in the spotlight for those brief moments.  We are a presenter with an audience of one.  For many of those storytellers speaking to one, the thought of sharing themselves or their talents with a larger audience is simply not going to happen.  Their preference is for working behind the scenes and being an invisible supporter. 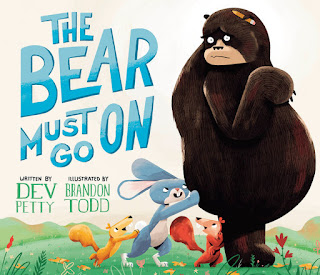 As life would have it, sometimes what is desired and what is needed are two entirely different scenarios.  The Bear Must Go On (Philomel Books, February 11, 2020) written by Dev Petty with illustrations by Brandon Todd focuses on a group of forest friends with a zest for jazzing up their current situation.  Their endeavors are filled with exuberance and loads of hilarity.

Four woodland animals could not decide how to spend their spring day.

As Bear takes notes of their loud demands, his humming to himself turns into a lilting tune he begins to whistle.  The trio voice their requirements for hats, tickets and a curtain exclaiming how every item needs to be perfect to keep the show from being ruined.  Bear happily writes; confident he is not going to be out front on the stage.

As you can imagine, nuts have to be offered to all attending the show.  They are the ideal refreshment.  Four working as a single unit begin to assemble all the elements for their splendid show.  Each time Rabbit, Squirrel or Other Squirrel mention something else, Bear notes it.  They work all day and into the early night.

As the population of the forest arrives to see the show, everything is as the friends planned.  The curtain opens and then everyone is stunned, especially Rabbit, Squirrel and Other Squirrel.  Bear scans his notes.  Bear makes a suggestion.  He is not overjoyed with his companions' response, but Bear is the best kind of friend.


Readers are quickly endeared to the characters, Rabbit, Squirrel, Other Squirrel and Bear, in this story because of their shared conversations in the narrative.  Based on their commentary by author Dev Petty, their highly animated personalities are guaranteed to have readers laughing out loud; in particular when Rabbit, Squirrel and Other Squirrel are compared to Bear.  (And if you aren't grinning at a character named Other Squirrel, then you need to check to see if you have any sense of humor.)  An additional technique author Dev Petty employs is to drop hints as to what Bear's notes reveal with respect to the conclusion.  She keeps adding and increasing one specific aspect.  Here is a passage.

"We also need tickets," said Rabbit.  "SHINY tickets."
"VERY SHINY," SAID Squirrel.
"Write SHINY in big letters, Bear!" said Other Squirrel.  "No one will come if the tickets are dull.  Everything will be ruined."

Bear surely didn't want anything to be ruined.  He wanted everyone to come to the show, especially since he wouldn't be in it.


When you initially look at the front, right side, of the matching and open dust jacket and book case, it's obvious Bear is less than eager to do what his friends, Rabbit, Squirrel and Other Squirrel are urging him to do.  The facial expressions on all the characters' faces is our first hint at the differing personalities.  Here, too, is our introduction to the full and vibrant color palette used throughout the book.

To the left, on the back, on the same light tan canvas is a bowler hat among flowers with a SHINY gold ticket stuck in the hat band. A speech bubble above the hat reads:

in bright green letters. On the opening and closing endpapers are a variety of hats, pencils, and flowers patterned on a pale blue background.  A double-page picture of the four forest friends chatting on a hilly meadow supplies a scene for the title page.  Digitally rendered by Brandon Todd the illustrations range in size from double-page pictures, to full-page images, and to a group of geometrically-shaped visuals on a single page.

In each of these images Brandon Todd includes a vast array of details and perspectives.  His speech bubbles become highly valuable features.  Comedy is frequently embedded in these pictures.  Readers will find themselves deciphering Bear's notes which appear above him and finally around all the characters.

One of my many favorite illustrations spans two pages.  It is early evening with a full moon sitting on the horizon.  On the left side Rabbit is sewing the red and green striped curtain draped on the floor of the carefully built stage.  Squirrel and Other Squirrel are putting tiny hats with strings on the heads of birds and handing them the invitations.  The birds are delivering the invitations to the show.  On the right in a clearing among the trees is Bear.  He holds his pencil in one paw and polished, SHINY, tickets in the other paw.  Musical notes lift from his mouth.  The setting for the stage on the left is wooded with night hues in the trees, flowers and gently rolling hills.


For anyone in need of courage and inspiration to give something out of their comfort zone a try, The Bear Must Go On written by Dev Petty with illustrations by Brandon Todd is an excellent choice.  For those who love a super story filled with humor, friendship and several shocking surprises, this is the book for you.  Truthfully, I can't look at the front of the jacket and case without smiling.  You'll definitely want a copy in your personal and professional collections.

To learn more about Dev Petty and Brandon Todd and their other work, please access their respective websites by following the links attached to their names.  Dev Petty has accounts on Facebook, Instagram and Twitter.  Brandon Todd has accounts on Instagram, Tumblr and Twitter.  At the publisher's website you can view the endpapers.  Scholastic's Ambassador of School Libraries, John Schumacher, hosted the book trailer and a chat with Dev Petty at his site, Watch. Connect. Read.
Posted by Xena's Mom at 12:30 AM