Each time assistance is supplied to those unable to help themselves, the soul of the world beats a bit stronger.  We do this when water is given to birds in winter when natural water is frozen or in the summer heat with weeks of no rain.  We do this when flowers and trees are planted which benefit insects and the planet.  We do this when someone short or older can't reach something in a store and we climb the shelves to get it for them.  We do this when we place books in Little Free Libraries.  We do this every day in ways we can't remember.  It's a state of mind.  It is no accident that many religions and cultures practice some form of The Golden Rule. 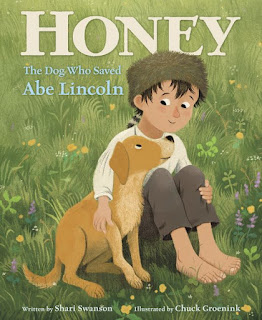 For those who extend kindness to animals, wild and domestic, as children, it is often reflected in their actions as adults. Honey: The Dog Who Saved Abe Lincoln (Katherine Tegen Books, an imprint of HarperCollinsPublishers, January 14, 2020) written by Shari Swanson with illustrations by Chuck Groenink shares with readers a childhood event; an event which builds an unbreakable bond.  The love of a dog is a gift, a gift enjoyed every day of their lives.

Young Abraham Lincoln was kneeling deep in the woods when three shrill blasts of a whistle cut through the quiet.

These three whistles signaled his ground corn at the mill needed to be taken home.  Abraham had to hurry but he didn't regret saving a frog from the mouth of a snake.  Thanking Mr. John Hodgen, the miller, he started home hoping to arrive before dark.  Close to their log cabin along Knob Creek, Abe suddenly stopped.  What was that sound?

The boy discovered a dog with a broken front leg.  Relying on knowledge gained from working on his family's farm, Abe splinted the leg using materials from the woods and his clothing. His mother, Nancy, was worried sick when he got home but nevertheless, he was allowed to keep the dog.  Honey, the name Abe gave him, followed the boy everywhere.  They were inseparable.

It was known by the miller that Abe was usually late arriving and leaving the mill with his corn.  Abe was easily distracted by all there was to see.  One day waiting for the corn to be ground, Abraham and Honey wandered into one of the many caves found in Kentucky.  Abraham got stuck between two rocks.  It got darker and darker outside.  Honey knew he had to leave his boy.


In her debut as a picture book author, Shari Swanson brings a story to readers about Abraham Lincoln sure to find a permanent place in their hearts.  His kinship with the natural world, his appreciation for all living things, is revealed in an expressive narrative woven with facts and through realistically depicted conversations with other people in his life.  Readers will understand the significance of Abe's perceptions in the wild.  What if he had not heard Honey?  Readers will also marvel at the astuteness of Abraham at only seven years old.  Shari Swanson ties the finding of the dog to his helping of Abraham with the slightly altered repetition of a phrase which will have readers nodding knowingly.  Here is a passage.

Abe's father was asleep by the fire when Abe got home, but his mother was waiting up. "Oh, Abraham, where have you been off to this time?"  Didn't you know I would be worried?"
"I found a real honey of a dog.  His leg is broken," Abe whispered.

"Please let me keep him."
Abe looked up at his mother.
"He'll do lots of good things for me," he told her.  "You just watch and see."


Beginning with the open and matching dust jacket and book case, the illustrations for this title were created by Chuck Groenink digitally in Photoshop.  Using a full color palette with attention to detail, readers can readily sense the warmth and affection between Abraham Lincoln and his dog, Honey.  Both the images, the one on the front, right, and the one on the back, left, on the jacket and case show Abe and Honey in one of Abraham's preferred settings, outdoors.  With Honey leaning into Abraham on the front, it's a dog's way of hugging.  By wrapping a single arm around Honey, Abraham is recognizing the dog's love.

On the back, a partial interior illustration is used.  It's the scene in the evening of Abraham walking home after finding Honey.  The dog with a splint on his leg is following along the path behind Abraham.  The boy is looking back at the dog. They are enveloped by the darkening of the grass, shrubs, and trees against a purple and pale peach sky.

A map of the area around
HODGEN'S MILL
where Abe grew up
(Kentucky, Circa 1816).

Specific areas of importance are labeled, and some are highlighted in a much lighter color to draw our attention.  On the title page Abraham and Honey are moving toward readers through a field on a partly sunny day, looking ahead.  On the verso and dedication pages smaller images of Abe and Honey are placed on crisp white paper.

The illustrations by Chuck Groenink alternate in size between double-page pictures, smaller images and full-page pictures.  They complement the pacing of the narrative. The letter L has been placed on the bag of ground corn Abraham carries.  I wonder if the G on other bags refers to the illustrator's name.  In most of the images outside, creatures are inserted into an appropriate place.

I was curious about one image when Abraham arrives home after finding Honey.  I wanted to see if the interior of the cabin was historically accurate. It is from photographs I was able to find.  I was also curious about Nancy Lincoln looking back at her husband as she kneels in front of her son and his new dog.  This lead me, as I hope it does others, to do some research about Thomas Lincoln, Abe's father.

Several of my many, many favorite images are clustered on a single page.  In these pictures we see Abraham and Honey together.  The text reads:

Three small pictures are placed on white.  The first is of Honey treeing a squirrel with Abraham close behind him.  In the second one, Abraham looks to be placing a smaller bird back on a branch with Honey watching.  In the third one Honey sits behind Abraham with porcupine quills in his nose.  Abraham kneels behind a trap.  He has released the porcupine, now walking away, from its confines.


When collaborators bring a story to light about a historical figure, it is a happy day for readers.  Honey: The Dog Who Saved Abe Lincoln written by Shari Swanson with illustrations by Chuck Groenink is a book, based on a true tale, readers will remember.  At the close of the book is a Timeline of Abraham Lincoln and His Animal Encounters.  Here readers will find other little-known facts about this amazing man.  A one page Author's Note concludes the book.  I highly recommend (as does Mulan) this title for your professional and personal book collections.