In the spring, most of the summer and sometimes in the autumn, they are frequent visitors.  They reside in clusters or create a carpet.  Many believe there is magic attached to them.  They can be said to be predictors of wealth, grant wishes and bring joy.  It is a fact they are used as food and in beverages and for medicinal purposes. 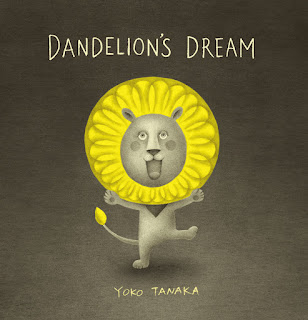 The dandelion was named for its jagged-edge leaves; dent de lion translates to lion's tooth.  In her author illustrator debut, Dandelion's Dream (Candlewick Press, February 11, 2020), Yoko Tanaka broadens this word origin with her wondrous wordless story.  What if you, an individual dandelion in a field of dandelions, burst forth not as a blossom but a real lion?

Total disbelief fills your mind at this turn of natural events.  Then, as you gaze at your four paws and lion's body, you dash away to explore. With a leap of faith and fantasy, you ride on the lamp of a train engine.  The view is breathtaking.

Unfortunately, a gust of wind tumbles you from that perch, but fortunately you land on the back of a woolly sheep whose herd is headed toward the sea.  High in the rigging of a sailing ship, you lift your face and mane to the sun.  A kindly bird offers a wing as an umbrella when raindrops fall.

After docking at a large city, the hustle and bustle of the streets is daunting and frightening.  Gleaming lights lead to a delicious treat, and a cinematic idea fills your mind.  Your imagination takes flight until you find yourself coming full circle.  But, wait . . .

A full moon and aging companions offer one final episode in this adventure.  You join others.  You ascend to fulfill your dream.


This story by Yoko Tanaka is brilliant in conception and completion.  It's not only of the flower becoming a real lion but of the interconnectedness between each incident.  There is a flawless flow from one form of transportation to another.  There is also a beautiful blend of that which is made by human hands and that which is solely a part of the natural world.


Using a limited color palette Yoko Tanaka fashions a memorable story in her exquisite images.  On the open and matching dust jacket and book case, we first see, on the right (front), the dandelion gleefully happy at becoming a real lion.  To the left, on the back, the dandelion is in full bloom with a smaller bud extending from the left side.  This becomes the lion's tail.  Along the yellow spine are tiny dandelion seeds floating between the text.

The opening and closing endpapers are a bright yellow.  With a page turn the dark gray background is a canvas for the text of the verso and title pages and, on the right, the field of dandelions fades to the back with Dandelion about to bloom on the right.  This is the beginning of the story.

Using charcoal and coloring digitally Yoko Tanaka supplies readers with breathtaking scenes across double pages, a series of vertical panels spanning two pages, a group of square and rectangular images on a single page and full-page pictures.  Once two smaller visuals are placed over a larger picture.  These shifts in size contribute to the excellent pacing and foreshadowing.

When Yoko Tanaka wishes to express the utter bliss Dandelion is feeling, she brings us close to him but then she surprises us by giving us a panoramic view comparing his tiny size to the real world.  Every emotion experienced by Dandelion is shown on his face.  We feel a deep bond to this little flower turned king of beasts.  His openness to taking different pathways is invigorating and hopeful.

One of my many, many, favorite illustrations is a full-page picture.  It is a close-up view of the rigging on the sailing ship.  A portion of the mast and wrapped and stretched rope are shown.  On the mast sits Dandelion.  He is leaning back on his front paws.  His tail is up.  His face is upturned toward the sun.  Closed eyes and a smile on his face suggest contentment. In the background against a pale gray sky are two white birds.


Without the use of words, Yoko Tanaka in Dandelion's Dream, tells a tale readers will implore you to read to them repeatedly.  There will be moments eliciting sighs, gasps and grins.  And I expect there will be loud exclamations when the final illustration is revealed.  I can't imagine a personal or professional bookshelf without a copy of this book on it.

To learn more about Yoko Tanaka and her other work, please follow the link attached to her name to access her website.  Yoko Tanaka has an account on Instagram. At the publisher's website you can view two stunning pages of artwork.  At Penguin Random House you can view the first five pages after the endpapers.  In 2015 Yoko Tanaka was the featured illustrator at Words & Pictures, the SCBWI British Isles Online Magazine.
Posted by Xena's Mom at 6:00 PM