When we leave our homes, permanently, we do so with mixed feelings.  We find ourselves experiencing a combination of excitement and anxiety.  We are starting over someplace new; even if it's in the same community or state.  If we have left one state or country, moving to another, everything is amplified.  To make the choice to relocate out of fear or to avoid further relentless persecution heightens every emotion. 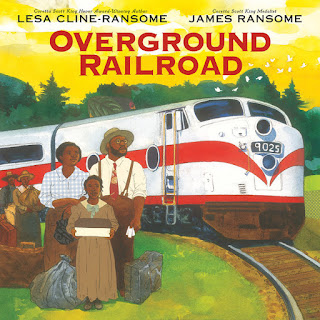 For many the decision brings other hardships.  Even starting the journey is laden with peril.  Overground Railroad (Holiday House, January 7, 2020) written by Lesa Cline-Ransome with illustrations by James E. Ransome addresses these very real worries endured by those millions of people who were part of the Great Migration.  Left behind were their family, homes, and possessions too large to carry.  They ventured forth in hopes of a better life.

Some walked.
Some drove.
But we took the train north.
Me and Mama and Daddy got to the station
crack of dawn early
before anyone
could see us leave.
Daddy holding tight
to me with one hand
three tickets to New York in the other.

In this first passage urgency and determination envelope the narrator and her parents.  Bags and a shoebox packed with food accompany these three travelers.  They move to the rear of the train car for African American passengers bound for New York City.

At one stop so many others board the train with bags and boxes, the car is crowded to capacity.  People stand or sit on the floor.  Ruth Ellen and her father play games with cards.  Then she begins reading a book her teacher gave her on her last day of school, "Narrative of the Life of Frederick Douglass."  As the train travels through Virginia and toward Washington, D. C., the girl keeps reading.  She wonders about all the people squeezed into this car, believing they are going to a fresh start with more freedom.

When the train crosses a border, the WHITES ONLY sign is removed by porters.  People can sit in any car they desire and move about the train.  Ruth Ellen and her parents wander down the aisles; the distinctions in amenities are staggering.  Geographical landmarks trigger a comparison in the girl's mind between her trip and that taken by Frederick Douglass.  The city lights flickering in buildings against the dark on their arrival are a reminder of others who looked to the North for freedom.


When children tell a story, they share their experiences openly with truth.  Readers will readily identify with every thought shared by Ruth Ellen.  Her voice through the writing of Lesa Cline-Ransome is clear, moving and descriptive.  We are fully aware of the family's life in the South and their train trip to the North with each tiny personal detail given to us by Ruth Ellen.  The inclusion of the conductor calling out each station stop brings us further into the story.  Here is a passage.

In our straight-back seats
when we finish with cards
Mama fusses in her purse
Daddy stares ahead
I take out the book
Teacher gave me.
The cover's worn,
pages too.
"Read to me, Ruthie," Mama says
and I do.
First the title,
"Narrative of the Life of
Frederick Douglass."


The yellow sky, on the front of the dust jacket, as the sun rises at the station signals hope with the white birds flying to the right.  You can almost feel the hearts of Ruth Ellen and her parents swell with longing as the train curves around them and others waiting.  Ruth Ellen holds the shoebox packed with food by her grandmother and her father holds the three tickets which represent freedom.  To the left, on the back, on a light purple canvas is a portion and smaller version of an interior image.  The train is crossing the Delaware River surrounded by a pastoral countryside.  The text reads:

Making their way north aboard the Overground Railroad in
search of hope, freedom, and a better life.

On the book case artist, illustrator, James E. Ransome has placed an interior illustration signifying the end of one chapter in this family's life and the beginning of another.  On the opening and closing endpapers a large cotton plant with spread branches, ready for picking, is over four separate pictures depicting methods of travel taken by those migrating North.  These are powerful endpapers.

With a page turn the two-page picture for the title page gives us a view of a cotton field next to Ruth Ellen's home with the train moving across the horizon in the distance.  On the verso and dedication pages, James E. Ransome has placed in square frames on white, first, a visual of the railroad track and second, a single cotton boll on a stalk against brown earth and a blue sky.  Each image is rendered

carefully placed for a realistic effect, historically and emotionally.  (One of the passengers on the train is reading a newspaper from Washington, D. C. dated May 15, 1939.)

Each two-page picture takes us back in time so we may comprehend.  In the faces of Ruth Ellen's parents, we see their quiet resolve.  On Ruth Ellen's face, we see a mixture of emotions as the trip progresses.

One of my many favorite illustrations is of Ruth Ellen and her parents seated on the train.  They are occupying a single seat with Ruth Ellen next to the window, Mama in the middle and Daddy on the end of the seat closet to the aisle.  Mama is holding the shoebox on her lap.  Ruth Ellen and Daddy are playing the card game War using the top of the shoebox as a table.  In this scene we can see the beautiful blend of papers James E. Ransome uses throughout the book on their clothing and in the clothing of the other passengers seated behind them.


This exemplary tribute to those people part of the Great Migration is a book for all readers.  Overground Railroad written by Lesa Cline-Ransome with illustrations by James E. Ransome will supply understanding, generate discussions and create a thirst for more knowledge.  An Author's Note at the end provides further information.  I highly recommend this title for your personal and professional collections.

To learn more about Lesa Cline-Ransome and James E. Ransome and their other work, please follow the links attached to their names to access their respective websites.  Lesa Cline-Ransome has accounts on Facebook and Twitter.  James E. Ransome has accounts on Facebook and Instagram.  At Penguin Random House you can view the stunning endpapers.  Perhaps you will find this article at History.com helpful.  Lesa Cline-Ransome dedicates the book to Isabel Wilkerson, author of The Warmth of Other Suns: The Epic Story of America's Great Migration.
Posted by Xena's Mom at 5:51 PM