An Eye For Adventure

Some say they were blacksmiths for the gods of Greeks.  Others say they were shepherds living with humans.  Those that lived among humans were less than cordial.  (Just ask Odysseus.)  As to their physical characteristics, there seems to be a consensus.  They were large, strong and had a single eye in the middle of their foreheads. 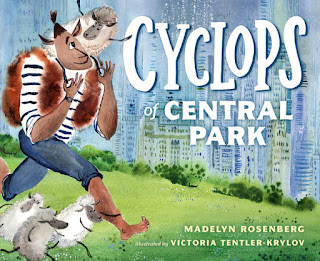 Apparently, they also had a dose of immortality pulsing through their veins.  As Cyclops of Central Park (G. P. Putnam's Sons, February 11, 2020) written by Madelyn Rosenberg with illustrations by Victoria Tentler-Krylov clearly discloses, one is alive and well, residing in New York City.  This particular Cyclops is rather apprehensive, a stay-at-home kind of guy who loves his sheep, all eighteen of them.

Late at night, just before he closed his eye and went to sleep in his Central Park cave, Cyclops counted his sheep.

When Cyclops awakened the next morning, one of his sheep was gone.  It was Eugene.  That sheep would not stay home.  Eugene loved the world.  Cyclops loved the cave.

Knowing he had to find Eugene and save him from all possible harm, Cyclops admonished the remaining sheep, seventeen, to stay at the cave.  Cyclops visited the Empire State Building and stopped at the Guggenheim, but Eugene was not there.  He made Lost Sheep posters to hang around Times Square.  No one seemed to notice when Cyclops searched for Eugene during a Yankees' game.  Where was Eugene?

Cyclops bravely went to a place he knew Eugene loved.  Unfortunately, he was not at the Statue of Liberty.  This one-eyed giant was heartsick, and he knew he needed help.  Back at the cave the flock was ready to assume their roles as super-finders.  Believe it or not, Cyclops and the sheep had an entire subway car to themselves.

At the correct station, the band of eighteen raced to an aptly named ride, the Cyclone, a loop-de-loop, high-in-the-sky roller coaster.  There was Eugene at the tip top, at the front of the first car, and happy as any sheep could be.  When the ride was completed Eugene wanted Cyclops and his seventeen pals to ride the Cyclone with him.  Cyclops had already pushed himself more than he thought possible.  His reply and the remainder of the day revealed the value in embracing more than one point of view, even though, initially, you simply couldn't comprehend it.


Readers will readily recognize and understand the contrast between Eugene and Cyclops as written by Madelyn Rosenberg.  There are those of us who welcome adventure and those of us who feel much braver inside the walls of our homes.  Within the narrative occasional dialogue, word play, and the inclusion of place names involves us more personally in the story.  We are out in the world with Cyclops, touring New York City, in search of a bold sheep.  At the close of the book, Madelyn Rosenberg cleverly brings us back to the beginning repeating phrases with a slight change.  Here is a passage.

Cyclops looked behind the ficus tree and under the bed.
He searched the meadow where the sheep often stood, taking
in the view.  The meadow was empty.
Cyclops bit his nails.  He had explained 1,022 times about
the dangers lurking nearby.  The grass was too sharp.
The carousel was too twirly.  The new restaurant on
Fifth Avenue did not serve spaghetti.


When you open the dust jacket, the scene on the front continues past the spine to the left edge.  The cityscape in hues of blue and the green of the meadow complement each other.  Even though the chances of us seeing Cyclops with his sheep in Central Park are unlikely, artist Victoria Tentler-Krylov takes the impossible and makes it real.  The postures of the sheep blend in perfectly with the dog walkers, bicycle riders and a jogger pushing a baby stroller seen on the left.  None of the beings seemed surprised in the slightest to see each other.  The expressions on the faces of the sheep and Cyclops here, and throughout the book, are fabulous. [I am working with an F & G.]

On the title page the use of green and blue for the text on a white background is engaging and supplies a wonderful space for many of the running sheep.  Rendered

in watercolor and gouache, and completed in Adobe Photoshop,

the illustrations are exquisitely detailed with fine lines and a wash of colors.  You'll find yourself pausing at each page turn to study all the elements.  On the first full-page picture when Cyclops counts the sheep, each one has a bed a bit different than the other sheep.  Their quilts are not identical either.

The next image, a double-page picture, gives us a hint of their living quarters complete with modern conveniences and a large round table.  You'll be fascinated by all the breakfast food and the kiddie swimming pool in their front yard.  In a word, these visuals are enchanting but also fun-loving.

Sometimes we are high above the action, looking at a panorama spread before us.  Other times we are in the thick of the moment with Cyclops.  The reactions of people around him range from treating him like every other person to panic at the sight of him. (Wait until you see the expression on the face of the Statue of Liberty.)  Each illustration, whether on a full page or two pages, is an amazing snapshot of New York City.  You will notice some new element each time you look at an image.

One of my many, many favorite illustrations is on a single page.  We are inside the subway car.  The background is white but the items inside the car are vibrant.  The signage is placed in a row along the ceiling on either side.  A street name and map are visible.  The seats are an orange red shade.  The sheep are sitting in them, holding their walkie-talkies.  Curled up, bent over and between them is Cyclops.  He is barefoot, wearing his blue pants, blue and white striped shirt, his furry vest and aviator's hat with a single goggle.  He is carrying a satchel.  He is looking a bit worried and undoubtedly uncomfortable.


As a read aloud, Cyclops of Central Park written by Madelyn Rosenberg with illustrations by Victoria Tentler-Krylov is a first-class winner.  The blend of narrative, dialogue, inventive wordplay and imaginative, whimsical artwork will engage readers from beginning to end.  I know there will be requests of read it again.  This book will also promote discussions on Greek mythology and how different personalities can work to the benefit of each other.  You'll want to have a copy on your personal and professional bookshelves.

Here is a brief glimpse of the endpapers.


Me, opening hardback copies of CYCLOPS OF CENTRAL PARK, gorgeously illustrated by Victoria Tentler-Krylov. Filmed by @WendyShang and sped up a smidge, which is why we sound like Alvin and the Chipmunks. #kidlit, #picturebooks pic.twitter.com/sy0AaaS75s
— Madelyn Rosenberg has a sly sense of the absurd. (@madrosenberg) November 6, 2019