To leave that which provides comfort requires a certain kind of bravery and, sometimes, an unintended impetus.  An unplanned incident might place us in a position not of our choosing.  We are faced with choices for which we have no experience.  We are completely unprepared.  This is a frightening feeling. 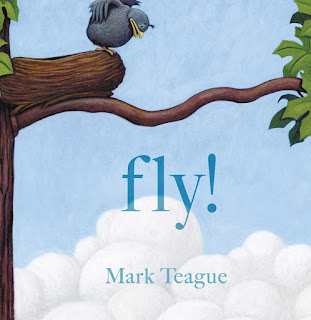 To alleviate this fear, our first thought is to return to comfort as soon as possible.  In fly! (Beach Lane Books, an imprint of Simon & Schuster Children's Publishing Division, September 17, 2019) conceived and illustrated by Mark Teague a fledgling is faced with an undesirable dilemma.  Its challenge appears insurmountable.

In this wordless tale a baby bird with a ceaseless need for worms finds itself in an unfortunate situation.  As the day begins, its parent serves up worm after worm.  Tiring of the child's demands the parent makes one of their own.  It wants the bird to come out of the nest, to the branch and be fed the next worm there.

In a fit of frustration and wanting only the next worm, the fledgling furiously leaps out of the nest and tumbles to the ground.  YIKES!  The parent flies down to asses any harm, and then tells the baby bird to fly back to the nest.

This is not at all what the child wants to do.  The baby bird suggests hopping on its parent's back for a ride back to the nest.  To the parent, this is ridiculous.  All kinds of birds fly.  The baby bird proposes a hot air balloon, a hand glider, itself as a superhero or an airplane pilot.  This infuriates the parent.

In an effort to reason with its baby, the parent mentions a journey to be taken toward a southern region in autumn.  The responses from the fledgling are numerous modes of transportation; none of which are flying with its wings.  The baby bird is now laughing uncontrollably.

As nightfall arrives, in a final tactic, the parent describes three more scenarios.  Then the parent does the unthinkable.  As you might expect, the baby bird acts accordingly.  The result is as surprising as it was in the morning.  Sweet dreams.


The baby bird balanced on the edge of the nest on the front of the matching dust jacket and book case has no intention of flying.  It's much too far from the nest to the ground for flying.  The only thing on its mind is worms.  To the left, on the back, on a canvas of white, the baby bird is explaining to its frustrated parent why flying is not an option. The text on the front is varnished.  The image on the back is varnished.

On a sky-blue background on the opening endpapers are five rows of nests.  The baby bird is in or on the nest in a variety of positions.  On the closing endpapers, a similar background is used.  The baby bird is blissfully happy in several different poses after resolving its problem.  On the title page the title is much larger than on the jacket and case.  Beneath it is Mark Teague's name above the nest.  In the nest, the egg has just opened.

Rendered in acrylics by Mark Teague, the illustrations in this title speak the proverbial thousand words every time.  To begin, two full-page pictures set the stage for the hunger of the baby bird and the constant presentation of a worm by the parent.  The first double-page picture introduces the use of speech bubbles, all pictorial.  These conversations begin the conflict between the parent and child and the ultimate quandary for the baby bird.

The use of single-page images, two-page visuals and two double-page vertical displays are brilliant in providing splendid pacing with every page turn.  Mark Teague also places a smaller image on a larger double-page picture.  Sometimes the borders of his pictorial speech bubbles go off a page.  The facial expression on the baby bird and parent elevate the hilarity to laugh-out-loud funny.  We are also privy to masterful use of perspective.

One of my many, many favorite illustrations is a double-page picture.  On a crisp, white background a swirl of blue like a pathway begins in the upper, left-hand side and winds up and down to the upper, right hand side.  The baby bird is positioned on three points on this path.  In its pictorial balloons of speech, it is hurtling off a sky jump, flying like a super bird and piloting a single-seat airplane.  With each revelation it shouts and snickers harder.  In the lower, right-hand corner is the parent bird looking right at readers.  Its mouth is turned down.  Its wings are hugged to its sides.  Squiggles of steam rise from its head.  This contrast is the comedy.


Regardless of the number of times you read fly! written (conceived) and illustrated by Mark Teague, you'll find yourself laughing.  This book will appeal to readers of all ages because of the humor and how many can connect to the reality being depicted.  I highly recommend this title for your professional and personal bookshelves.

At the National Center for Children's Illustrated Literature there is an entry for Mark Teague.  This is a video from NCCIL 2016.


There is a Q & A with Mark Teague at Publishers Weekly by Sara Grochowski dated July 13, 2017.  At the publisher's website you can view multiple interior images.  They have a link to a three-page guide about sharing wordless picture books with young readers.  They also have a video with instructions in making Your Own Fly! Bird.
Posted by Xena's Mom at 11:25 PM