It's December 24, 2019.  This time of year, the air is dry and cold.  In northern Michigan tonight, it is unlikely the sky will be clear but if it's cloudless the sliver of moon will allow for lots of stars to be visible.  These pinpricks of light shimmer like jewels, some are so large it's as if you can pluck them from the dark. 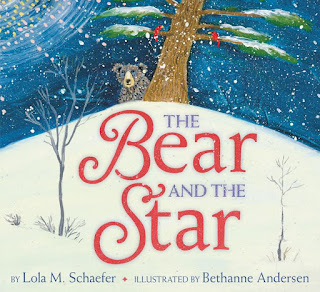 In a recent holiday title, our eyes turn to the sky, a December sky.  The Bear And The Star (Greenwillow Books, an imprint of HarperCollinsPublishers, September 24, 2019) written by Lola M. Schaefer with illustrations by Bethanne Andersen centers on an extraordinary event.  It will change the world.

Early one December morning,
Bear woke
and turned toward the horizon,
to a star---
a new star,
barley visible,
yet larger than any before.

This star was a signal.  Bear knew it was time.  First, he needed to seek a special tree.  This tree would surpass all other trees in height, strength and in location.  He found an elegant evergreen standing alone on a hilltop.

Bear raised up and roared in the four directions.  His call resounded in places high and low, near and far.  Bear went back to his woods and gathered his forest friends.  They ran by his side to the tree on the hill.  Animals, all kinds of animals, from those four directions soon joined the others.

The brightness of the star grew.  Bear's voice again thundered and carried across great distances.  Humans, from all walks of life, heard.  They stopped, listened and knew it was time.

They sought the place from where Bear's words came.  They carried items they valued and brought others with them.  And the star rose higher and higher and became brighter and brighter.  You might be wondering why animals and humans from around the world came to this tree over which the star shined.  If you think about it and reach into your heart of hearts, you will know why it is time and why they arrived.


After reading the first sentence on the first page, Lola M. Schaefer has our undivided attention.  With every page turn, a layer is added to this tension, a tension revolving around a single question.  This question has an answer for which the animals and people are aware.  With lyrical descriptors for all these beings, we see their diversity and willingness to heed the Bear's call.  Here are two passages.

As the star shined brighter,
Bear roared louder than before,
his voice booming
across mesa and meadow,
over sea and peak,
from cliff and bluff.

People put down
hammer and hoe,
grass and thatch,
knife and rice,
shield and sword.


As you hold the open and matching dust jacket and book case in your hands, it's hard not to marvel at the splendid snowy setting.  The sloping hill on the front continues downward on the other side of the spine.  Behind it, another hill, more in the distance, begins in the center on the left and meets the first hill to form a wide v.  Leafless trees seen on the front are also placed on the back.  A third red bird rests in one of the two trees there.  The radiating beams of light from the star appear on either side of the spine.  We are intrigued by the presence of the bear and his relationship to the star.

On the opening and closing endpapers are different scenes of swirling snowflakes against two skies.  On the first, a rosy morning light pours from the right lower corner upward and into the lightening blue sky.  On the second, a rich darker blue covers most of the two pages, getting slighter lighter in the lower half on the right side.  A slight bit of blush is seen at the bottom.

A double-page picture greets readers on the title page.  Set upon the canvas of the lightening sky filled with falling snowflakes is Bear.  Rays of the star extend down from the top on the left.  We are shown the upper portion of Bear's body as he looks directly at us.

These full color illustrations rendered by Bethanne Andersen with

all span two pages.  They are individually beautiful but combined they reveal a breathtaking story.  We are treated to a variety of perspectives, each designed to bring us into the moment.

It is a decidedly sensory experience.  We can feel the vibrations from the sound of Bear's roar.  We can hear the voices of all the animals moving from around the world toward the tree.  We can listen to the sounds of the people gathering and singing.  All are joining together for one purpose.

One of my many, many favorite images is of Bear with a cardinal, raccoon, squirrel and a salamander.  We are very close to them as they move from left to right.  The cardinal, wings spread wide, covers a large portion of the upper, left-hand corner.  It carries a small olive branch in its beak.  Beneath the bird is Bear extending across most of the left and past the center on the right.  Next to and under him is the raccoon carrying a sprig of holly in its mouth.  Squirrel scampers ahead of the raccoon with an acorn in its paws.  Along the bottom on the right a salamander maintains a fast pace.  They are placed on a canvas of blue with a heavy snowfall.


When you read a book like this one, the mounting suspense is replaced with a satisfied sigh and perhaps a tear at the conclusion.  The Bear And The Star written by Lola M. Schaefer with illustrations by Bethanne Andersen is an important title, relevant now and always.  It is one you will want to include in your personal and professional collections.  I am sure it will promote thoughtful discussions.