In twelve days on December 31, 2019 at midnight, this decade will come to a close. To say the world and its inhabitants have seen monumental changes in these ten years is truly an understatement. From the individual to the global level and everything in-between, there have been heartbreaking setbacks and soul-soaring achievements, great sadness and glorious happiness. 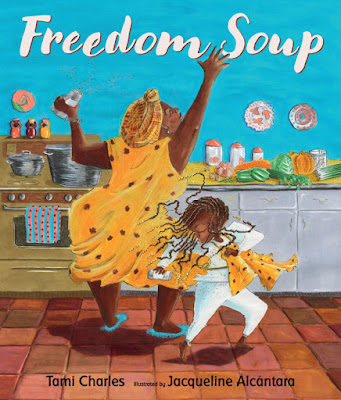 A new year is a time to remember, reflect and refine.  It is a time to honor the past and embrace the future.  Freedom Soup (Candlewick Press, December 10, 2019) written by Tami Charles with illustrations by Jacqueline Alcantara is certain to have readers recalling their family histories and favorite soup recipes and how the two mix to make memories passed from generation to generation.

Today is New Year's Day.  This year, I get to help make Freedom Soup.

The child's grandmother, Ti Gran, believes she has a gift for cooking.  Winter is wrapping the outside world in cold and snow.  Inside warmth spreads throughout Ti Gran's kitchen as music, Haitian kompa, fills the air with its rhythmic sounds.  The two dance in shared affection for each other and the meal they are making.

Belle and Ti Gran combine a mixture of herbs and marinate the meat.  Together they raise up the boiled pumpkin and remove the skin.  Vegetables are peeled and pared.  Belle adds them to the pot with the pumpkin and the now browned meat.  As the ingredients simmer and are stirred, Ti Gran begins a story, the story of Freedom Soup.

Her grandmother speaks of slavery in Haiti.  The Haitians labored in the relentless sun where sugarcane, coffee and vegetables grew.  They made soup for the masters but were not allowed to eat it.  It was only for the free to consume.

After years and years of slavery, the people fought for years to regain their freedom.  In celebration of their new independence, they made and ate Freedom Soup.  As the two start to dance reliving the freedom their ancestors won, Belle adds pasta to the soup.  Later, a host of relatives gather at Ti Gran's marveling at the soup and savoring the stories.


Author Tami Charles shares her special recipe for storytelling in this narrative.  Her ingredients, lush descriptions of setting and rich verbs, create a delectable and sensory experience for readers. The inclusion of dialogue elevates her first-person perspective as told by Belle.  Here is a passage.

Outside, snow is piling,
cottony-thick.  Inside, warm,
sweet air flows.

Haitian kompa pours
through the speakers.  The
shake-shake of maracas
vibrates down to my toes.


When you first look at the open, matching dust jacket and book case, the front, on the right, is shouting out absolute bliss.  The bright, bold complementary colors heighten the movements of Ti Gran and Belle.  The swirl of their clothing, their upraised and bent arms and toe-tapping feet invite, no demand, you walk right into that scene and join them!

To the left, on the back, a circular image is placed on a golden brush-stroked canvas.  It is an image from Ti Gran's story of the revolt of the slaves for freedom.  This dust jacket and book case show us the celebration and the historical basis for it, generation after generation.

There is a tiny floral pattern in two-tone hues of pumpkin on the opening and closing endpapers.  On the title page, a kneeling Ti Gran is placing an apron over the head of Belle before they begin cooking in her kitchen. Rendered

in pencil, marker, and gouache
and assembled digitally

Each picture is brimming with cultural and historical details, movement, the aroma of the soup and the wondrous pleasure Belle and her Ti Gran feel when they are together.  When the story is being told, Jacqueline Alcantara places Ti Gran, Belle or the soup in part of the picture, a combination that brings the past into the present.  Readers will enjoy the shifts in perspective and how it contributes to the pacing and emphasizes specific moments.

One of my many, many favorite illustrations is for the text above noted.  It is a double-page picture.  On the left in the background through the kitchen windows, we can see a city white with snow and chilly blue with cold.  A counter stretches beneath the windows to the refrigerator on the right. A radio on the counter is playing the Haitian kompa. Another counter moves from the left edge of the page, crosses the gutter and ends on the bottom of the right side.  This counter is filled with ingredients for the soup.  Ti Gran is holding a carrot in her left hand and stirring something in a bowl with her right hand.  On the right Belle is standing on a chair dancing and shaking a spice shaker.  Behind her is the refrigerator, magnets on the top portion, pictures, treasured items, a few pieces of art and a plant.  This scene reminds us of the importance of making our own happiness whenever we can.


This book, Freedom Soup written by Tami Charles with illustrations by Jacqueline Alcantara, is a story of tasting triumph each and every year.  It is about family, remembering from where we've come and as Ti Gran says:

"Oh, Belle.  Nothing in this world is free, not even freedom."

At the close of the book, the author includes a recipe for Freedom Soup and an author's note.  Both are wonderful and informative.  I can't imagine a professional or personal library without a copy of this title.

To learn more about Tami Charles and Jacqueline Alcantara and their other work, please follow the links attached to their names to access their respective websites.  Tami Charles has accounts on Instagram and Twitter.  Jacqueline Alcantara has accounts on Instagram and Twitter.  The cover for this title was revealed at Latinxs in Kid Lit.  You can view interior images at the publisher's website, at Penguin Random House and at the publisher's Facebook account.
Posted by Xena's Mom at 11:51 PM