It started as a memorial.  It was a single tree; a gift from two author friends to honor my sweet Xena after she passed.  For each year since her death, I added a tree.  On the hilltop, there are now five dwarf Alberta spruce.

The hill and surrounding land prior to the development was filled with trees.  It's now a mission to replace that which was removed.  This summer two redbud trees, a poplar, and twelve cedar trees, of varying varieties, were planted. 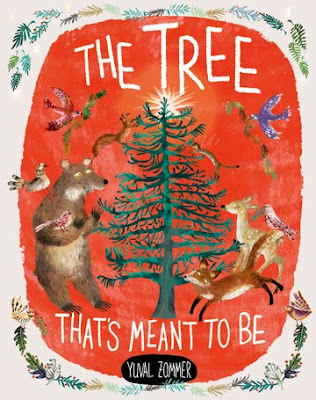 These trees will be nurtured but also allowed to grow and bloom as naturally as possible.  This means their perfection will be defined differently than the meaning found in a dictionary.  The Tree That's Meant To Be (Oxford University Press, October 3, 2019 and Doubleday Books for Young Readers, September 24, 2019) written and illustrated by Yuval Zommer honors the beauty and importance of all trees (all individuals).

I
am
the tree
that's meant to be.

Narrating this story, the tree laments its growth, or lack thereof, from the tiniest of seeds.  Its branches on either side are not symmetrically aligned.  Its height is diminished compared to the other surrounding trees.

The seasons, spring, summer and autumn arrive and leave in their allotted time, until one night, everything is coated in

People start to enter the forest.  They are carrying tools in order to complete their task.  It seems they are seeking their perfect Christmas tree.  Soon all that's there are clusters of stumps.  The little fir is alone.

In the cold silence of the woodland, the tiny tree cries out for company.  There is no reply.  A question of worth works its way into the little fir's soul.

The next morning as daylight washes over the wintry scene, one by one, animals creep from the safety of the woods.  They bring decorations found on branches, boughs and blooms.  Carefully they are placed on the little fir.  That night as stars twinkle in the clear cold air, another gift descends, not from the animals, but from the wonder Christmas brings.

The seasons, spring, summer, autumn and winter, arrive and leave in their allotted time.  Years pass.  It ends as it began, only better.

Read the words of this narrative aloud.  They, as written by Yuval Zommer, sing with a gentle cadence through the use of alliteration and rhyme. By giving voice to the fir in a first-person narrative, readers are drawn to the plight of the tree.  (There is always a time when we compare ourselves to others and feel less than we should.)  By including some conversation, the story becomes more personal.  Here is a passage.

But who would hear my cry?
Who could speak the language of tree?
And understand me?

The happiness known at the end of the book shines on the front of the dust jacket as readers note all the delicate details in Yuval Zommer's signature artwork.  The animals are gathering around the fir and some are bringing decorations.  Natural and seasonal colors blend beautifully.  Many of the elements are varnished and shine with embedded glitter.

To the left, on the back, the fir, at the bottom, is framed by larger evergreens.  A flurry of forest animals is placed on the sides and birds fly at the top.  Clouds release rain and snow.  Several stars shine in clearing skies.  It's a scene paying tribute to the majesty found in our forests.

On the book case, on the right or front, a marbleized red is the canvas for the little fir tree, standing all alone.  Beneath it, in white, is the text.  On the back, to the left, is a lush forest setting replete with all kinds of trees.  Birds fly among the leafy branches.

On the opening and closing endpapers a diagonal pattern of white fir trees, this little fir tree, is placed on a darker spring green.  An initial title page highlights the text and the fir on a white background.  On the verso and formal title pages intricate items from the forest border the words.  The fir is the center of attention on the title page.

Each double-page picture portrays the splendor found in our forests.  These illustrations are a study in beauty, different kinds of beauty.  Twice, Yuval Zommer, uses those double pages by featuring three horizontal pictures first and then three vertical visuals, second.  His final single-page picture brings readers directly into the narrative.

One of my many, many favorite illustrations is a bird's eye view.  The air is filled with falling snow.  Green and blue are prevalent in the color palette.  Clouds are layered above the trees.  Single leaves fall in the breeze.  A few night birds fly from tree to tree. Others huddle in tree foliage.  The tiny tree, the fir, stands alone in a small clearing near the center on the right side.  If you've ever walked at night when the snow is falling, this scene, as portrayed by Yuval Zommer, is perfection.

As a representation of the wonder of our forests, of the special magic found during this season and as a tribute to individuality, The Tree That's Meant To Be written and illustrated by Yuval Zommer is excellent.  These words in the dedication

Dedicated to the forest

are obvious in every syllable and line written and painted by Yuval Zommer.  I am happy to add this title to my personal collection and you'll want it on the shelves of your professional collection.

To learn more about Yuval Zommer and his other work, please visit the website found by following the link attached to his name.  Yuval Zommer has accounts on Instagram and Twitter.  At the World Book Day site, you can download an associated activity.
Posted by Xena's Mom at 2:18 PM