It is the first and one of eight names celebrated in a poem nearly two hundred years old.  It is sung joyfully in several seasonal carols.  In fact, portions of the poem and songs containing this name have been committed to memory by even the youngest among us.  It might be said these verses are as well-known as The Alphabet Song. 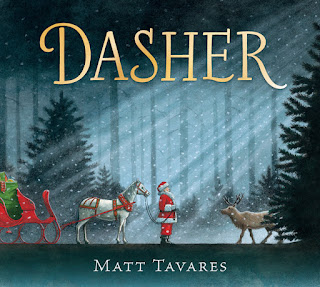 This name, and the being that responds to it, are attached to an important event in the lore of Christmas.  On Christmas Eve, Santa Claus fills a sleigh full of gifts to bring to children throughout the world.  This sleigh is pulled by a team of nine reindeer, but no one knows why until now.  Dasher (Candlewick Press, September 10, 2019) written and illustrated by Matt Tavares is an original explanatory tale radiating Christmas magic.  When a dream fills a heart, that heart will find a way to fulfill that dream.

YOU MAY HAVE HEARD THE STORY of how a certain red-nosed reindeer was chosen to guide Santa's sleigh one foggy Christmas Eve.  You've probably heard of the eight other reindeer too.  Maybe you can even remember all their names.

The narrator continues by telling readers this was not always true.  Originally Santa's sleigh was pulled by a single horse that went by the name of Silverbell.  As time went on the number of children and gifts to deliver grew in number.  Silverbell needed help.  A young doe, a reindeer called Dasher, needed to escape.

Dasher, her parents and siblings were captive in a circus, the J. P. Finnegan's Traveling Circus and Menagerie.  Daily they spent hours in the heat from the sun as crowds pressed around them and long nights hauling the circus wagons to the next destination.  To lessen their misery their mother told them stories of a place with clear, brisk air and snow covering the ground to cushion their hooves.  Reindeer were free there as the North Star shown down on them at night.

Dasher longed to live in this place, but Mr. Finnegan was not likely to let any of the reindeer leave without dire consequences.  The one thing Dasher enjoyed about being in the circus was the children but still, night after night, her longing increased as she watched the North Star.

One wild and windy evening, fate gave Dasher an opportunity.  Bravery made her bold and she bolted from the enclosure.  No matter how long she followed the North Star, it still seemed far, far away.  (Sometimes when we follow our dreams, a wish gives us hope to hold.)  Dasher's wish brought the sound of sleigh bells, a man dressed in red and white fur and a horse, a horse named Silverbell.

During their conversation, the man and Dasher reached an agreement.  It was a night of many firsts for the young reindeer.  On Christmas morning and in the following days, Dasher's heart nearly burst with happiness at living in the land from her mother's stories.  Before a year passed, Dasher's biggest desire became a reality and one of the most enchanting chapters in Christmas traditions.


With his preface author Matt Tavares reaches out to readers connecting us to what we know and welcoming us into a fascinating and lasting revelation.  Like Dasher, who among us has not felt trapped by circumstances and dreamed of a better place, a place fashioned by truth and a mother's stories?  Matt Tavares increases our bond with Dasher and his family through his choice of descriptive words.  We feel the heat of their days and the work they endure at night.  We are soothed by Dasher's mother's tales of the land under the North Star.  We feel Dasher's yearning.

The repetition of specific words ties portions of the story together.  These words sustain the dream in Dasher's heart and in our collective minds as readers.  They further attach us to this reindeer as her story unfolds.  We can feel a gentle tension growing until we read seven very special words about a sound coming from the woods on a snowy night.  Here is a passage.

Dasher could hear rustling from inside Mr. Finnegan's trailer.
She glanced up at the North Star.  She looked back at her sleeping
family.  She knew that this might be her only chance.  Her heart
pounded.  She took a deep breath.


How can you look at the front of the dust jacket and not feel the spell of this picture weaving around you?  In the calm of a stormy, snowy night the moon is sending rays through parting clouds.  In this play of light and nighttime shadow stands Santa Claus with his sleigh pulled by a horse.  Is that Dasher coming from the evergreen on the right?  There is much mystery and possibilities in this scene.  The title is embossed in burnished golden foil.

To the left, on the back, on a pale blue canvas, a smaller version of a double-page interior picture is framed in fine red lines.  It is an illustration certain to have readers, young and old alike, smiling with the thrill of the moment.  This visual, like many in this book, is a portrait of the power of faith, hope and wishes come true.  On the book case, from one side to the other, is a gorgeous night sky.  On the front the North Star is shining big and bright; so close we can touch it.

The red used throughout the book covers the opening and closing endpapers.  Prior to the title page, Matt Tavares frames his introduction in those same fine red lines.  This is placed in a setting of a cold wintry night with the North Star directly overhead.  Along the bottom, walking in the snow, are two reindeer.  With a page turn the verso and title pages feature a double-page image.  It's a panoramic view, from slightly above, of the circus with its tents, wagons and the pen encircling Dasher and her family.  It depicts the heat and dust and desperation.

Matt Tavares brings us completely into Dasher's world with his pictures.  Some are on single pages bordered by fine red lines opposite pages of white for text and a small North Star in gold beneath the words.  For a few we are brought close to the scene.  We could be standing with the children feeding Dasher carrots.  In only one picture does Matt Tavares break the frame with an element.

All the pictures are intensely atmospheric, but the double-page pictures evoke strong emotions of weariness, wanting, wishing and then the delight of a wonderful shift in the story.  When Matt Tavares creates his art, it's as if any one of them could come to life at any moment.  We want to reach out or step into the visual.

One of my many, many favorite illustrations is deep in the woods.  On the left in the darkness the text is placed in a framed box with the tiny North Star.  On the right in the light of the moon's rays, Santa is standing and talking with Silverbell in front of the sleigh loaded with gifts.  They are framed by leaves and evergreen branches.  Standing in the foreground, watching and listening is Dasher.  Looking at this picture, even without the text, you can sense a turning point.


Dasher written and illustrated by Matt Tavares is well on its way to becoming a holiday classic.  Everything about it, every tiny detail, is exquisite bookmaking.  This is a story of Christmas to share as often as you can, year after year.  I give this my highest recommendation and hope you'll add it to your personal and professional holiday collections.

To learn more about Matt Tavares and his other work, please visit his website by following the link attached to his name.  Matt Tavares has accounts on Facebook, Instagram and Twitter. At the publisher's website is an activity kit.  At Penguin Random House you can view interior images.  Matt Tavares wrote a lovely post about the process for this book at the Nerdy Book Club.  At Scholastic's Ambassador of School Libraries, John Schumacher's site, Watch. Connect. Read., please enjoy the chat between him and Matt Tavares for the book trailer premiere.