Finding Heart In The Heat

The next solstice is fast approaching; only thirty more days until the time between sunrise and sunset is nearly fourteen hours.  With the longer amounts of daylight, temperatures will become warmer.  With each subsequent year, we have seen record-breaking heat.  In this heat every living thing needs shade and water. 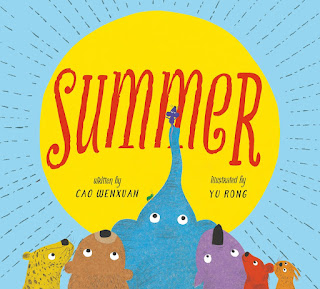 On those days with the sun relentlessly shining and no breeze to assist in any type of cooling, a stillness settles over Earth's inhabitants.  In their newest collaboration, Summer (Imprint, a part of Macmillan Publishing Group, LLC, May 7, 2019) renowned Chinese author Cao Wenxuan and Chinese illustrator Yu Rong create an original tale happening during one of those sultry afternoons.  Respite comes through observation amid controversy.

IN SUMMER,
the burning hot sun
hangs in the sky.

Creatures wild and domestic and humans, along the banks of a river, seek cover from heat.  Out on the grasslands, everything is dry from lack of rain and the sun.  The animals, stirring up dust as they move, search for shade.

Unexpectedly the jackal spots a tree and shouts about the discovery.  It's a race to see who will arrive there first.  All seven of them believe they are first, especially the smallest of them, a mouse.  Let's remember readers, it's in the middle of a hot, hot summer.  There are only a few leaves on one branch.  The animals fight.

As the largest, the elephant makes a decision.  He stands under the tree.  He trumpets out dust to chase the mouse, lynx, jackal, leopard, brown bear, and rhino away.  Finally, one animal laughs at the sight of the elephant.  Soon they are all laughing at a huge beast trying to find shade under a few leaves.  In the middle of their laughter, two humans walk past.  The animals go silent, watching a father and his son.

The son is completely shaded by his father's shadow.  The animals keep watching in silence until the duo have disappeared.  The lynx speaks and the mouse moves.  Without another word each animal adjusts their position.  The heat from the summer sun is still present but change is in the air.


For those who have not experienced the unbearable heat of a summer with no rain and the sun constantly shining, author Cao Wenxuan supplies vivid images through his word choices.  We become more personally involved in the story when he gives voice to the animals. We realize their desperation through their argument and fight, but even in their frustration they can find humor.  This, I believe, is an important point.  It opens them up to the transformation of their perspectives which comes.  Here is a portion of a passage.

A frog floats on a lotus leaf,
beneath the umbrella of another.
Ducks sleep with
heads tucked in wings
beneath the cool arching bridge.


Rendered in cut paper and pencil by Yu Rong all the illustrations, beginning on the open dust jacket, will astound readers.  The fine lines and intricate, tiny details work together marvelously.  The illustration seen on the front of the dust jacket hints at a long-awaited event.  Notice the green beetle climbing up the elephant.  This creature is also featured.

The design of radiating black lines from a yellow circle on a bright blue continues to the left, on the back.  Six of the animals are gathered together under the words:

The sun, the yellow circle, is varnished on the dust jacket.  On the book case the lines from the sun stretch over the spine and to the edge of the back on the same bright blue background.  The only thing inside the sun is the text.  The animals are absent.

On the opening and closing endpapers Yu Rong presents a vast grassland landscape with mountains in the distance.  In the first scene shades of yellow and blue are prominent.  The sun is shining over the mountains.  The landscape, although still vast, is altered in the second set of endpapers.  Hues of blue, purple and pink are present.  Something has caused a shift.

The title page image spans two pages.  The large yellow sun beats down on the animals in a row, largest to smallest, left to right, on a yellow background with mountains in the distance.  In tiny, tiny print the dedications by Cao Wenxuan and Yu Rong weave over the backs of the elephant and rhino.

Many of the pictures are double-page pictures.  The circle design continues and is present in some of the illustrations with the text on the opposite page.  Readers will appreciate the different, vibrant colors of the animals, especially on crisp white backgrounds.  They will also enjoy the pencil drawings of the animals.

One of the cleverest elements is supplied after the animals watch the father and son disappear in silence.  The next five page turns are surprisingly modified.  (I don't to say anything more.)  Each item in all the illustrations is carefully placed to convey an emotion or capture a moment.

One of my many, many favorite illustrations is toward the end of the story.  It is a single-page picture with a white canvas.  The animals' backs are to readers.  They are standing in a row along the bottom, largest on the left and ending with the lynx on the right.  All we can see are their necks and heads.  The mouse and the beetle are seated on the elephant's head.  None of them are moving.  They are hopefully watching something.


Summer written by Cao Wenxuan with illustrations by Yu Rong is brilliant.  Sometimes in the middle of an unsolvable situation, an answer appears.  We wonder if we had been willing to shift our point of view earlier, we might have found the solution ourselves. Cooperation and selflessness are presented with perfection.  I highly recommend this for your professional and personal book collections.

This article in Publishers Weekly about Cao Wenxuan provides information about this highly acclaimed author.  You can find information about Yu Rong at Walker Books.  You can view interior images at the publisher's website.
Posted by Xena's Mom at 8:13 PM