One of the more popular and proper forms of social engagement is the act of sharing a cup of hot tea or a glass of ice-cold tea.  Depending on status and customs there are any number of rituals to observe.  They range from the type of tea served, the making of the tea, the time of day when it is presented, the appropriate cups, glasses, mugs or receptacles, and to whether any other forms of refreshment will accompany the tea. 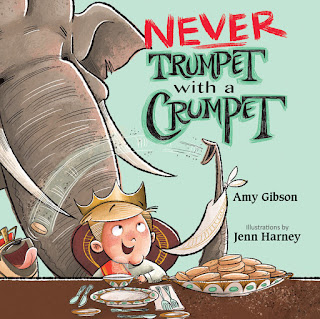 If the invitation to attend a tea comes from royalty, certainly the atmosphere and practices are more formal.  Never Trumpet with a Crumpet (Boyds Mills Press, an imprint of Highlights, May 14, 2019) written by Amy Gibson with illustrations by Jenn Harney is a rhyming reflection replete with hilarious images on exactly what can go wrong (or right).  This noble household will never be the same.

NOW IF PERCHANCE HER MAJESTY
so happens to ask you to tea,
it's time to press your Sunday best.
She'll put your manners to the test.

The manners referenced in these first lyrical sentences are those of a collection of animals, numbering at least sixteen, gathered at the palace.  Their entrance receives mixed receptions.  The Queen and her pooch, Duke, are slightly horrified.  The young Prince is thrilled.  For the moment decorum is being followed.

As the narrative dictates behavior as to posture and patience, natural instincts of the creatures are replacing etiquette.  Although, to be fair, the magic-manner words of please and thank you have, at least, frozen any ill-timed behavior.  This is, of course, short-lived.  It's hard for an orangutan not to lap up tea or a moose not to inhale cookies.  The use of silverware is abandoned.

When the elephant trumpets when eating crumpets, all sense of propriety is gone.  Eating habits observed in polite society are non-existent.  There are no dainty bites.  How is it possible to chew your food when survival is as natural as sunrise and sunset?

When the guests are asked to quell their activities, the ruckus roars louder and louder.  This is indeed a tea party of preposterous pandemonium.  Yet, with their hunger and thirst, satisfied the animals do what animals do.  And what does the Queen, Prince and Duke do?  You'll have no clue.


The idea of a group of animals responding to a royal invitation to a tea party is brimming with possibilities, possibilities for loads of laughter.  This is accomplished through the adept writing of Amy Gibson.  Her story told in four-line verses with lines one and two and three and four rhyming poses proper courtesies adapted for the guests.  As the gala progresses, though, the entreaties become more outlandish.  It's not often you implore your company with these words:

No swinging from the chandelier

Here is a passage.

Oh, do sit still. Refrain from spills.
Mind your antlers.  Watch your quills.

No reaching, grabbing---mercy me!---
however long your tongue may be.


When you open the matching dust jacket and book case the image extends over the spin with the canvas colors spanning to the flap edges.  On the front we are aware of the hilarity we will find within the body of the book.  The Prince is highly entertained by the crumpet-throwing elephant.  Duke is more than willing to open wide for the treat.

What readers cannot see to the left, on the back, is the Queen seated at the end of the table.  She is gazing warily at the elephant behind her.  Somehow this tea party is not going as planned.  A golden yellow covers the opening and closing endpapers.

The illustrative interpretation by Jenn Harney begins prior to the verso and title pages.  We see the Queen grandly carrying the invitation on a tray, walking to the left.  A brisk breeze carries it outside along a grand fence where a trunk lifts and snatches it out of the air.  The next double-page picture features the grand hall set for the tea party.  A grumpy Prince waits as his mother gracefully enters.

Each double-page picture is highly animated and brimming with comedic details.  There are a multitude of stories within this story.  Readers will quickly notice the raccoon has a tendency at thievery, the python seems to have an appetite for more than the offered food and the Queen is headed for a prickly disaster and a loss of her added coiffure.  The facial features and body postures of all the characters are uproariously funny.

One of my many, many favorite illustrations shows readers an angle of the table covered with an assortment of desserts.  On the left all we can see of the giraffe is its long neck wrapped with a napkin.  Next to it is the Prince smiling up at a very large grinning bear.  The raccoon hiding behind a tray piled high with food is stealing the crown off the head of Duke, the dog.  On the ride side of the gutter a seal is balancing a cup full of sugar cubes with the opossum hanging overhead and removing them to place in its pouch.  The Queen looking decidedly uneasy is pouring tea into the open mouth of the hippo.  One of the squirrels watches from its perch on the mouth of the hippo.


According to past practice there may be a specific way to attend and enjoy a royal tea party but after reading this book, Never Trumpet with a Crumpet written by Amy Gibson with illustrations by Jenn Harney, no one will remember what that is.  If you want a laugh-out-loud story time pair this joyful title with Tea Rex written and illustrated by Molly Idle, Tea Party Rules written by Ame Dyckman with illustrations by K. G. Campbell, and How to Behave at a Tea Party written by Madelyn Rosenberg with illustrations by Heather Ross.  This is one title you'll want to have on your professional and personal bookshelves when portraying how manners out of control can be the most fun . . . for everyone.

To learn more about Amy Gibson and Jenn Harney and their other work, please access their websites by following the links attached to their names.  Amy Gibson has an account on Twitter. Jenn Harney has accounts on Instagram and Twitter.  At Penguin Random House you are given a tiny hint of interior pages.
Posted by Xena's Mom at 1:00 AM