Let's pause a minute.  When you read or hear the word llama, what comes to mind first?  Do you think of Peru or Bolivia or South America?  Do you think of a llama's habit of spitting when they are upset?  Maybe you'll think of their wool and the many things made from it.  I'll bet you didn't know llamas are used to guard flocks of sheep. 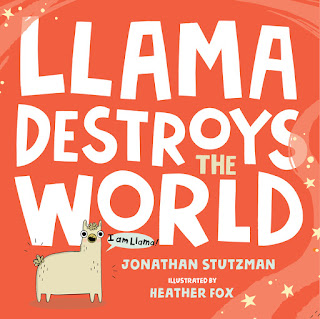 One thing is certain, when you read or hear the word llama, you don't think about the end of life as you know it.  Llama Destroys The World (May 7, 2019) written by Jonathan Stutzman with illustrations by Heather Fox chronicles one very wild five days.  In fact, it's hard to believe this series of events happen.  It's totally crazy! Or is it?

On Friday, Llama will destroy the world.

If this first sentence does not get your attention, Llama loudly introduces himself in the next sentence.  You are fully engaged with this creature now.  On Monday, when most individuals are moaning about the weekend being over, Llama is overjoyed to discover every single crumb of cake ever baked.  And he eats it.

We are told it's a mistake; his first mistake.  This can only mean trouble.  On Tuesdays this llama dances in his special dancing pants.  It is a bit tricky to get them on this particular Tuesday after consuming all that cake, but he squeezes into them which now becomes his second mistake.   He dances like there is no tomorrow (Like there is no tomorrow is often used to mean with complete abandon but in this case it might be prophetic.)

In the middle of one of his dance moves those pants can't take the stress any longer.  They rip.  This rip sounds like the biggest rip in the history of rips.  It's so loud it roars out into the cosmos.  A black hole is formed.

This is no ordinary black hole.  Llama, ever the curious questioner, researches like an academic.  Instead of sharing his new knowledge about black holes, he commits his third mistake on Wednesday.  When Thursday rolls around Llama is blissfully unaware of our impending destruction.  On Friday it's too late.  It seems the black hole shares appetite cravings with Llama.  Or does it?  Black holes have their own secrets.


There is no more beautiful, hopeful and inspiring sound in the world than the sound of children's laughter.  The words in this book penned by Jonathan Stutzman are guaranteed to prompt loads of giggles and guffaws. Llama's declarations of his name and his single word vocabulary pair perfectly with the narration.  Jonathan Stutzman uses repetition to excellent effect.  It supplies a rhythm, pacing and builds anticipation.  Rhyming words and alliteration also play an important part in intensifying the outrageous silliness.  Here is a passage.

But he never danced without
his dancing pants; they made
his butt look groovy.
So Llama huffed and puffed . . .
. . .and squeezed and stuffed
himself into the pants.


Just like the first sentence in the story, the title in big crisp white letters on a swirling background of orange is designed to grab your attention.  The wide-eyed llama is placed to pique your curiosity.  The swirls on the dust jacket (I am working with an F & G.) cross the spine.  Pieces of cake and cupcakes join the whirl as Llama waits with a fork.  A pig carries a sign reading:

this is the end

watches on the sideline.

On the title page, Llama is telling us his name beneath the title text in orange.  Digital illustrations rendered by Heather Fox, in bright, bold colors elevate the story.  Opposite the single-page pictures on the right, text is placed in a variety of colors on the left.  Each color is usually found in the image on the right.  Double-page illustrations accentuate the drama of the text.

The point of view is altered to further underscore the words; we are close to the fork, knife and plate when Llama lets out a loud BURP but are given a panoramic view of the cosmos when the black hole is ripped open.  It's the eyes on Llama which tell a story all their own.  They are extremely expressive.  The addition of an accompanying pig and rabbit add to the sheer fun.  Readers will pause to notice the extra details like what Llama wears during his activities.  Will readers be able to figure out the importance of the number on the mailbox?

One of my many favorite illustrations is the double-page picture of the sound of the rip crescendoing into outer space.  On a darker blue background stars, outlines and fully-colored, sparkle.  On the left Earth is trembling and so is sister moon in lavender.  The rip begins as a point on the planet increasing in width.  White letters

on an orange canvas get larger and larger as they generate the black hole on the far right.  You know, without a doubt, nothing is going to remain the same after this event.


With every reading Llama Destroys The World written by Jonathan Stutzman with illustrations by Heather Fox gets funnier and funnier.  The laughter you hear is your own.  This book is meant to be shared as often as possible.  You will want to have a copy in both your professional and personal collections.

To discover more about Jonathan Stutzman and Heather Fox and their other work, please visit their respective websites by following the links attached to their names.  Jonathan Stutzman has accounts on Instagram and Twitter.  Heather Fox has accounts on Instagram and Twitter.  At the publisher's website you can view interior images.  Both Jonathan and Heather are interviewed at Publishers Weekly and on a Publishers Weekly KidsCast.  Jonathan is interviewed at Critter Lit.  Heather is featured at author Jarrett Lerner's website.  Be sure to read both of these interviews.  They are wonderful!