In the northern hemisphere the longest day of the year marks the summer solstice.  It is the season most welcomed by many; especially those who've endured a long cold winter.  It is a time of annual celebrations, rituals and change-of-pace activities.  For some, summer isn't summer without first watching an old favorite movie.  For others it's a time to enjoy outdoor sports; hiking in the woods or going to a baseball game.  Gardeners, vegetable and flower, are working before dawn and after dusk.  Friends and families gather for reunions and much-awaited vacations. 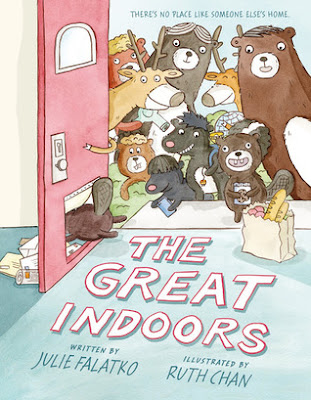 Many memorable vacations involve camping.  Throughout the United States campgrounds abound in state and national parks with fairly modern to downright rustic conditions.  They are located in forests, mountains and along lakes, rivers and streams.  Most people are unaware of an entire population also awaiting summer and all those vacant human homes.  With huge hilarity in every respect The Great Indoors (Disney Hyperion, April 9, 2019) written by Julie Falatko with illustrations by Ruth Chan gives us the inside scoop on the highly anticipated annual antics by animals of the forest and field.

The four bears, a father, mother, teenager and baby, bring their suitcases inside the recently empty home of a human family who left for a week of camping.  The teenager calls dibs on the bathroom for preening.  In short order the next group arrives.  It's the beavers.

They stake a claim on the kitchen.  Based on their bags and conversations, they will be providing the meals for the entire group.  Following them are the deer who definitely have a flair for dancing, disco dancing to be precise.  No one questions the skunks desire for resting on the couch and exulting in the electricity.  The first night features the group gathered around the television served by the beavers' most excellent cuisine.

Each subsequent day finds the bears, deer and skunks participating in their favorite activities, construction, music and social media, with complete uninterrupted abandon. They are well-fed by the zealous beavers.  They are feeling total bliss until the inevitable happens  Now they are victims of too-much-of-a good thing.

There is chaos in the kitchen.  A skunk drinks more than its share of coffee.  Someone is tasting the butter.  In fact, there is not-so-merry mayhem in every room in the house. A cacophony erupts.  It's time to head home in the outdoors.  With echoes of see you next year resonating in the now-deserted rooms, the humans return.  Surprise!


With a talent for finding the funniest side of any situation and flipping the ordinary to extraordinary, author Julie Falatko, starts building anticipation with her first sentence.  Alternating between pure narrative and priceless animal conversations, the gentle tension grows.  The animals are basking in all the modern conveniences the humans have abandoned for a week.  It's a total comedic contrast.

As the initial happiness starts to wan, the laughter factor increases.  You know with the shift in the statements made by the animals, something is going to happen.  Here are some sentences.

The skunks flopped onto the couch.
Ah, the simple life.
When you want light,
you just flip a switch.
So simple.

Just a small toaster fire!
You're not
supposed to put
nacho cheese in
the toaster!


Upon opening the dust jacket readers get a full view of a portion of the interior of the human's home.  (The scene on the front extends over the spine to the left edge on the back.)  By the wide-eyed looks and grins on the animals' faces, we know shenanigans are in the offing.  The placement and font of the title text is akin to the beginning of an epic movie.  The objects not usually associated with animals are varnished.

To the left, on the back, along the wall are a vase in blue and white with a dragon on it, a chair and a row of four sets of slippers.  On the wall are two photographs from previous family trips.  (Perhaps the vase and picture of the Canadian Parliament building are nods to Ruth Chan's childhood.  Other items in the home refer to the Chinese culture and language which is wonderful to see.)  Spread across the book case is an entire floor mat reminiscent of Twister.  Three deer, one bear, three beavers and two skunks are showcased.  It's funnier than funny to see them stretched out as a beaver works the spinner.  It should be noted one of the skunks is using an electronic devise.

Ruth Chan incorporates the endpapers in her visual interpretation of this story.  On the opening endpapers as the sun rises the family leaves the quiet country setting of their home.  On the closing endpapers the setting has expanded.  We are now in the forest.  There are two signs of the indoors' camping trip.  Readers are sure to burst out laughing.

On the title page the family car has vanished.  Two bears, father and mother, are peering from behind a tree and a bunch of bushes.  On the verso and first page we move close to the front door as father bear walks inside the house.

Most of the illustrations rendered by Ruth Chan span two pages.  To supply pacing smaller illustrations are group together on single pages and perspectives are shifted.  At one point, it's as if the roof of the home has been removed so we can look into all the rooms at once.  Readers will be pausing on every page to look at all the details, tiny text and facial expressions mirroring emotions and the hair styles on the animals.  (Can you spot a picture of Ruth's dog and cat?)

One of my many, many favorite pictures is of the chaos in the kitchen as the week is ending.  It's a close-up of the sink, countertop and oven.  One skunk is asking if another little stinker drank all the coffee.  At the jittery aspect of said skunk, standing on the open oven door, there is no doubt it did drink the coffee.  On the left a deer is licking a stick of butter.  A beaver, on the right, trying to make something wants to know who keeps licking the butter?  A blender is shooting out a beverage (no lid) and the freezer door is wide open.  No one looks happy but readers will be giggling and grinning.


For the laughter, for a unit on summer vacations, camping or a theme of role reversal The Great Indoors written by Julie Falatko with illustrations by Ruth Chan is a rib-tickling romp showing what happens when the outdoors comes inside.  This collaboration between Falatko and Chan is filled with comedy.  You will want to have a copy in your professional and personal collections.

To discover more about Julie Falatko and Ruth Chan and their other work, please follow the links attached to their names to access their respective websites.  Julie Falatko has accounts on Instagram and Twitter.  Ruth Chan has accounts on Instagram and Twitter.  The cover reveal for this book is hosted by Scholastic's Ambassador of School Libraries John Schumacher at Watch. Connect. Read.  He chats with both Julie and Ruth.  Julie Falatko is interviewed at Critter Lit.  Ruth Chan is the featured illustrator for The New York Times Books live Facebook chat.
Posted by Xena's Mom at 2:18 PM