Flight Of The Bluebird Blog Tour-Chatting With Author Kara LaReau

It’s a pleasure to have you back at Librarian’s Quest, Kara, on the first Monday in 2019.  It’s hard to believe that nearly an entire year has come and gone since your last visit showcasing The Uncanny Express, the second title in The Unintentional Adventures Of The Bland Sisters.  Once again the landscape outside my window is cloaked in more than eight inches of snow.  And it’s still snowing, but the absolute beauty and fun of the books in this series is they reach out, wrap around us and pull us into the current adventure.  We’ve been on a ship brimming with rowdy pirates (The Jolly Regina) and a train full of mysterious travelers.  Now we find ourselves airborne with the twins, Jaundice and Kale, in an effort to save their lives. 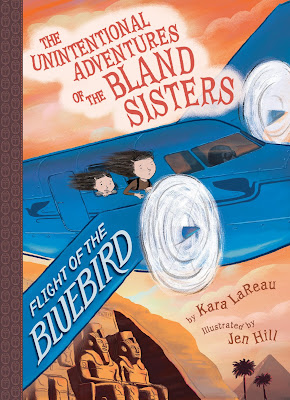 When reading the Flight Of The Bluebird (Amulet Books, an imprint of ABRAMS, January 8, 2018) the first thing readers might be curious about is why are the sisters traveling by plane this time and why is the name of the plane, Bluebird?

Well, I already had them on a ship in The Jolly Regina and a train in The Uncanny Express, so putting them on a plane seemed like the next natural step! The plane is called the Bluebird for two reasons: 1. Amelia Earhart named one of her planes “The Canary,” and since she is one of the inspirations for the character Beatrix Airedale, it seemed fitting to name the plane in my story something similar, and 2. It’s a bit of an insider joke with myself! I have a freelance editing business called Bluebird Works, which I started almost ten years ago and named after the bluebird of happiness. It took a lot to get that business off the ground, much like the airplane in the book!

You have continued with two wonderful elements in this book, employed in the first two titles.  At the beginning on two pages you have The Unintentional Cast of Characters.  The two villains are called Victor and Uggo.  Is this in reference to Victor Hugo, the French writer?  If so, why do you focus on him?

Victor Gazebo doesn’t have anything to do with Victor Hugo; I chose the name “Gazebo” because I liked the way it sounded, and the combination of “Victor” and “Gazebo” worked (to my ear) as a good villain’s name. Uggo is a play on Ugarte, Peter Lorre’s character from Casablanca, on which the character in my story is based. So there is a method to my naming madness!

I won’t ask about the other character names because I prefer to have readers discover the answers for themselves.

Secondly, you have each chapter heading highlighting insights and suggestions from a book the Bland Sisters are currently reading or happen to be carrying with them.  In Flight Of The Bluebird, the book referenced is Taking Off! With Trip Winger  (Your character/fictional names are fantastic, Kara.  You most definitely have a gift with word play.) As in the past, do each of the recommendations have to do with something happening in each chapter?

Yes, I made sure that each bit of aeronautical advice is somehow relevant to the action in the story. And I don’t want to give too much away, but the culmination of all this knowledge proves vital at the end of the story!

Is there a reason you decide to have one of the Bland Sisters participate in the method of travel this time?

I thought it was important to show that even though Jaundice and Kale retain much of their Blandness throughout the series, there is still character development and a clear arc to that development through the stories. I don’t want to give too much away, but that moment where one of the girls takes control (and one of them doesn’t) felt necessary on their journey together and as distinct personalities.

Do you ever plan on getting a pilot’s license Kara?  The reason I’m asking is my girlfriend had her pilot’s license when she was sixteen.  We used to go to a small airfield after school and on weekends and she would fly us in a two-seater airplane.  We had to spin the propeller sometimes to get the engine fired-up and going.

I don’t have any plans right now to get my pilot’s license; I can barely tolerate it when someone else is flying the plane!

This leads me to another question.  You mention in your author’s note that Beatrix Airedale is a blend of women like Bessie Coleman, Amelia Earhart and Nellie Bly.  Is there a favorite book you’ve read about any or all of them you would like to share with us? Candace Fleming’s book, Amelia Lost: the Life and Disappearance of Amelia Earhart, was an utterly gripping account.  I could not put it down.

In the interest of time, I did some reading and watched some great documentaries during my research. Candace Fleming’s book is great, and I also learned a lot from reading Ten Days a Madwoman: The Daring Life and Turbulent Times of the Original “Girl” Reporter, Nellie Bly by Deborah Noyes. I happened to watch a biography of Bessie Coleman which was streaming on her birthday last year (January 26th!) and really inspired me; though I can’t seem to locate the name of it, I see there’s a new documentary about her life called The Legend which is streaming on Amazon Prime right now, and I can’t wait to check it out!

In the portion of the book where the plane lands for refueling (the plane and food for the characters) you make several references to the film Casablanca.  I burst out laughing at one of them.  Why Casablanca?

Casablanca takes place at about the same time as Raiders of the Lost Ark (which is also when Flight of the Bluebird is set), so it seemed like a fun choice and definitely ripe for parody!

I think readers are going to be fascinated with the setting of this title.  Did you know this is where the third adventure would unfold when you were writing the first two titles?

I didn’t know what the second or the third book would be when I wrote the first book, but when I sold it to Abrams, I roughly fleshed out the rest of the trilogy. I wanted to “go big” with the final story, so an action-packed adventure in Egypt filled with lots of villains and mysteries and dreams and revelations (and a curse!) felt right!

The cryptic postcards the children receive from their parents add to the mystery and adventure.  Also what prompted you to use their mother’s journal to be a part of explanatory flashbacks?

I got the idea of the journal from Indiana Jones’ father’s Grail diary in Indiana Jones and the Last Crusade. I thought it would be a great way to introduce some of the Bland Sisters’ parents backstory, and also a few clues that help along the way with Jaundice and Kale’s adventures.

There are other items I would like to chat with you about but I don’t want to spoil anything for readers.  I will leave them with several of my many favorite lines from the book.

Life’s not worth living unless we’re taking risks and challenging ourselves.

I find both of these sections hilarious and typical of the Bland sisters.

Reading something so dry and practical was always a comfort.

“What now?”  asked Kale.
“I don’t know,” said Jaundice.  “I’ve never been trapped in a rug on a moving truck, surrounded by assassins.”

LOL. I’m so glad you enjoyed these lines, and the book in general — I had so much fun writing Flight of the Bluebird and all of the Unintentional Adventures. Thank you so much for giving me the opportunity to talk about these stories! 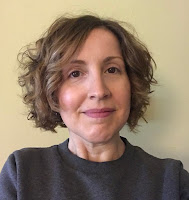 Kara LaReau was born and raised in Connecticut. She received her Masters in Fine Arts in Writing, Literature, and Publishing from Emerson College in Boston, Massachusetts and later worked as an editor at Candlewick Press and at Scholastic Press. She is the author of such picture books as UGLY FISH, illustrated by Scott Magoon, and Good Night Little Monsters, illustrated by Brian Won; an award-winning chapter book series called The Infamous Ratsos, illustrated by Matt Myers; and a middle-grade trilogy called The Unintentional Adventures of the Bland Sisters, illustrated by Jen Hill. Kara lives in Providence, Rhode Island with her husband and son and their cat.

SCHEDULED STOPS ON THE
FLIGHT OF THE BLUEBIRD
BLOG TOUR