For children (and adults) of the fifties and sixties some heroes of the television screen performed with supreme intelligence.  They never spoke a single word but there was never any doubt as to their capabilities to tell a memorable story.  From week to week and year after year, their audiences grew. 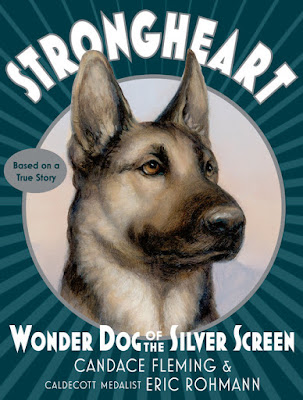 For five years (1954-1959) The Adventures of Rin Tin Tin and for nineteen seasons (1954-1973) Lassie highlighted the exploits of dedicated and fearless canine actors.  Perhaps these two spirited dog characters were following in the paw-steps of a previous popular star.  Strongheart: Wonder Dog Of The Silver Screen (Schwartz & Wade, February 6, 2018) written by Candace Fleming with illustrations by Caldecott Medalist Eric Rohmann recounts the very real rise to fame of a singular German shepherd.

THE PUPPY
On a farm between the Bavarian Alps and the city of Berlin, a carefree puppy named Etzel played in a sun-washed barnyard.
He chased the chickens, barking in delight at their squawks and flaps.
He tipped over his water bowl, splashing and sliding in sloppy-fun mud.
And he gulped down the last of his kibble, licking the bowl to shiny emptiness.

One day, suddenly without warning, Etzel is removed from the wonderful life he knows, placed in a dark bag and shuttled to a new life.  He is treated with cruelty, cruelty designed to shape him into a police dog.  He works on command governed by a fierce fear.

Unbeknownst to him on the other side of the ocean, a film director, Larry Trimble, and his screenwriter, Jane Murfin, have a plan.  They are going to search for a new star, a dog star.  Throughout the United States no dog appeals to Larry, neither did any in England, France, Italy but when he goes to Berlin, the police station in Berlin, everything changes.  The crash of broken glass, a lunge by muscle and fur and moments when time stands still reveal the beginning of a new friendship.

The journey home to the United States is one of constant patience by a human and unwavering wariness by his canine companion.  Through a conversation one day between Larry and Jane, Etzel receives his new name and his first lesson in learning to play, again.  A red rubber ball is his constant toy.  What Larry and Jane come to realize is Strongheart seems to understand everything they say.

Every single soul on the set of his first film is stunned by his abilities.  The Silent Call is an enormous success.  (This is in 1921 and movies are in black and white and silent.)  There are endorsements, especially for a dog food renamed Strongheart, publicity tours and more films.  Strongheart distinguishes himself unexpectedly on several occasions when his police dog training moves him to act justly.  Even when it seems as if the tide has turned against this amazing creature, the truth sets him free in a dramatic conclusion.


Using thirty-one chapters in 233 pages author Candace Fleming weaves facts from her research into this marvelous middle-grade novel.  The chapters, captivating in their detailed descriptions and realistic conversations, propel readers forward flawlessly.  The length and placement of the chapters add to the ever-growing tension, adventure and romance (canine and human).  Here are several passages.

The place did not look hopeful.  It squatted on a street corner, gray and tomblike.  Iron bars covered the windows.  Barbed wire coiled across the top of brick walls.  Surely he wouldn't find his star here.  He turned away.
From inside the grim fortress came the muffled sound of barking.
Larry turned back.  He shrugged.  "Aw, what the heck?  I'm here, aren't I?"
He pushed open the gate.
"Get out of the yard!" yelled a voice.
There came a bark like a clap of thunder, a crash and a splinter of glass.
GRRRRRR!
Etzel leaped through the broken window and tore across the yard.  Fur on end, teeth flashing, the dog sprang for Larry's throat.
"Stop!" Larry's voice sounded more pleading that commanding.
Etzel pulled back mid-lunge.  Alert and suspicious, his muscles still tense, he stood unmoving.
So did Larry.
Dog and man stared at each other.


Strongheart let the duck drop from his mouth.
He took a stumbling step forward.  Stopped.  He took another step forward.  Stopped.
"There's no way to save them," Larry went on.  "You've lost everything that matters to you . . .everything in the world."
Strongheart turned his head and gazed into the distance.  He seemed to be looking into the years ahead without his family.
Thik-thik-thik-thik
"That's it," said Larry.  "That's terrific, boy.  Hold it  . . ."
A memory came to Strongheart:  Rough hands were ripping him from his family.  Stuffing him into a bag.
Strongheart fell to the ground.  Howling, he covered his face with his paw.
"That's impossible!" cried Ed Brady.
"Dogs can't do that!" exclaimed Pete.
"Holy mackerel!" Jane gasped.  "He looks like he's crying."
For several long moments, the dog lay there, sides heaving.  Finally, he lifted his head and looked deep into the camera with an anguished expression.  Then, he dropped his head back to his forepaws.  Life, his actions seemed to say, had no meaning for him anymore.
Silence---broken only by the camera's grinding and the crew's sniffling---fell over the set.
Thik-thik-thik-thik


Even without the text on the front of the dust jacket, the portrait of Strongheart depicts strength and compassion.  This dog is poised for whatever is about to happen.  Within seconds he could turn and stare into your eyes or leap forward to chase or play.  To the left, on the back of the jacket, a faded scene from one of the films is the canvas for explanatory text and a portion of a starred review from a professional journal.  On the book case everything is removed except for Strongheart and the mountainous landscape.  The endpapers are covered in black.

Rendered in oil paint by Eric Rohmann the illustrations throughout this title, in black and white, are highly animated presenting a range of emotions.  There is heartbreak, injustice, humor, play, courage and genius (the dog's).  On numerous occasions the illustrations are without words.  They vary in size depending on the narrative.

The point of view in the pictures also supplies readers with a more participatory sense.  We are not only observers but also with Strongheart.  It's been almost ninety years since this beautiful animal died, but through the artwork of Eric Rohmann he comes back to life.

One of my many, many favorite paintings is on a single page.  It is opposite the portion of final text quoted.  Half of the page is the gray background.  On the right half of the page we zoom close to Strongheart, only seeing a portion of his alert right ear, wide, soulful right eye and the surrounding fur.  This is one powerful picture.


This title, Strongheart: Wonder Dog Of The Silver Screen written by Candace Fleming with illustrations by Eric Rohmann, was released nearly one year ago, but its value is lasting.  It is one of those books whose appeal will endure for generations because of the masterful storytelling in words and artwork.  It is a marvelous example of historical fiction that should find a place on the bookshelves of your personal and professional collections.  A lengthy The Truth Behind This Tale, actual photographs, a bibliography and notes conclude this book.  You could pair this title with Emily Arnold McCully's picture book, Strongheart: The World's First Movie Star Dog.