The Marking Of Twenty-Six

One of the most enjoyed units in our library each year was exploring the Japanese form of poetry called haiku.  For students hesitate to write poems, our choice to use a line of five syllables followed by a seven-syllable line and concluding with a five-syllable line was a structure many of them appreciated.  Did all of them adhere to the perimeters?  Not always, but the results, whether they selected the pattern or not, were wonderful.  You could feel the joy in the room as they discovered simple and ordinary things in our world are worthy of transformation and validation. 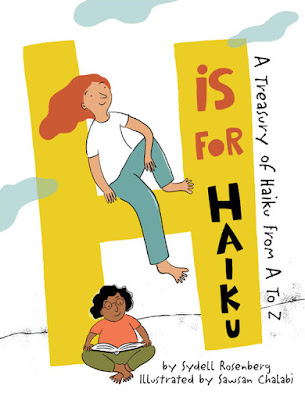 In 1968 the Haiku Society of America was founded.  One of its charter members was New York City public school teacher and writer Sydell (Syd) Rosenberg.  This woman, who passed away suddenly in 1996, had a dream.  Her children, specifically her daughter Amy Losak, vowed to make her vision a reality.  H Is For Haiku: A Treasury of Haiku from A to Z (Penny Candy Books, April 10, 2018) written by Sydell Rosenberg with illustrations by Sawsan Chalabi is a collection of twenty-six poems written for children (but to be enjoyed by all ages). In an introduction Amy Losak writes a letter to readers before her mother poetically defines haiku.

These twenty-six haiku poems take a different approach to exploring our alphabet.  Instead of solely focusing on a person, place or thing represented by a letter, each poem begins with the appropriate letter. It's a different path to take, allowing for more possibilities.

Adventures over
the cat sits
in the fur ring
of his tail, and dreams

Everyday sights in her city capture Rosenberg's attention.  A boy seated on a mailbox, a berry-carrying blue jay and the act of getting a first library card are a few of the first to be noted.  Items seen on the back seat of a car are prime elements in her imaginative mind.

On a rainy day, a cluster of children holding umbrellas become fungi.  A large seed carelessly tossed is a toy for a fun-loving feline.  A broom is formed by a tail twitching in the rays of sunshine.

The simple act of riding a bike on an autumn day reads like a short symphony.  You will wonder which is louder; a thunderstorm or the cacophony of recorders.  A perception on a full-moon night tricks a looker's eyes.

Laundry hanging on a clothesline reveals memories.  Puddles take pride in their purpose.  Each letter takes readers on a journey of discovery.  During this trip we are invited to breathe deeply, stop, focus and use every one of our senses.


With her writing of haiku in this book, Sydell Rosenberg guides children into the world of not only poetry but in the art of observation.  As she talks in her definition, haiku is a captured heartbeat.

Before the hoof comes down---that's haiku.

Sydell Rosenberg takes what might be an insignificant instance and with intention delivers something connecting us to each other.  Here is another of her poems from this book.

Neon wings
of moth
exploding into headlight,
on a country road

On the front of the dust jacket she gives us the impression of the H as being a part of the landscape with the clouds on the front extending over the spine to the left and back of the jacket.  This is precisely what author Sydell Rosenberg wants readers to see in her poems and in their day to day lives.  The featured girls are relaxed, comfortable.  I particularly like them being barefoot.

A colorful, tiny "v" patterns the opening endpapers (I'm working with a digital copy.)  On the title page a turtle mentioned in one of the poems is basking on a rock.  He is one of the first examples of a keen sense of humor Sawsan Chalabi displays in this book.  His nose is rather long. (He reminds me of Jimmy Durante.)

The full-color illustrations shift from full-page pictures to double-page images.  Some of the visuals only contain two colors, limited colors or an array of hues.  The fonts are bold, like many of the lines.  Readers will be delighted and surprised at the change of perspective; landscape view to close-up, depending on the poem.  Sometimes the illustrations are distinctively alone but other times one joins another; separate but parts of a larger whole.

One of my favorite pictures is of the children walking in the rain.  All four children from the bottom of the page to near the top are carrying red umbrellas with large white polka-dots.  The colors in their clothing, yellow, teal and orange, and the umbrellas are reflected in the colors of the letters in the poem.  The green from the iguana on the previous page is the color of the first letter, "H".


Sure to inspire and challenge readers to pen their own poems, H Is For Haiku written by Sydell Rosenberg with illustrations by Sawsan Chalabi is like a welcome sign.  Readers will start to look around a room in which they are sitting or standing, they will watch people whether they are in a grocery store or a movie theater and they will seek out animals domesticated and wild.  All have the potential to become part of a haiku poem.  Poetry collections will benefit from having this title.

To learn more about illustrator Sawsan Chalabi please follow the link attached to her name to access her website.  At the publisher's website you can view interior illustrations.  Amy Losak and Sawsan Chalabi are interviewed at author and illustrator, Jen Benton's website.  Amy is interviewed at Matt Forrest Esenwine's site, Vivian Kirkfield's site, at Cynthia Leitich Smith's site, at KidLit411 and Celebrate Picture Books.  Amy Losak wrote a guest post at Laura Sassi Tales.  At Teachers & Writers Magazine, a lesson around Sydell Rosenberg and this title is showcased.  Amy maintains an account on Twitter.