Some individuals from the moment of their first breath are destined to be different.  They have sunshine in their souls, desiring to shout it out.  Happiness is not a momentary mood for them but a way of life. 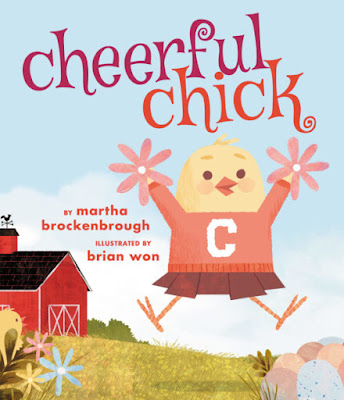 In their efforts to encourage others to choose an optimistic outlook, they do everything in their power to be their personal best.  Cheerful Chick (Arthur A. Levine Books, an imprint of Scholastic Inc., January 1, 2019) written by Martha Brockenbrough with illustrations by Brian Won is not only about pursuing your passion but inviting those around you to become part of a hopeful community.  It's all about shared joy.

Once inside a chicken's nest
A dozen eggs, all Grade-A best,
Lay still and warm, their contents sleeping,
All but one . . .

This chick cheered every waking moment.  Her noisy vocal chants gave the older chickens cranky attitudes.  Did this deter this youngster?  It did not.

This buoyant bundle of downy fluff tried to engage four other farm friends praising their abilities, but the results were negative.  With sagging spirits this sweet chick discarded her pom-poms and her cheerleading attire.  She admitted it's hard to have a team of one.

That night though, in still contemplation, she realized there is absolutely nothing wrong with being true to yourself, despite the response of nearby neighbors.  Again, this perky positive gal got her program polished.  When she greeted the morning, there were surprisingly multiple reasons to clap, jump and whoop with peppy precision.


Author Martha Brockenbrough has written an upbeat ode to enthusiasm.  Through her rhyming phrases we find ourselves cheering for this cheerful chick who devotes her mind and actions toward her heart's desire.  A blend of narrative, dialogue and cheers supply a fun-filled flow from one point to the next.  Here is a passage.

Ms. Cow just stood and blinked and chewed
And said, "I'm so not in the moooood."

And so, without another peep,
Chick went in search of Mr. Sheep.


The hues and color palette shown on the open dust jacket cast a rosy, warm glow here and throughout the title.  This combination of colors is guaranteed to have readers smiling.  The other chick peeking from the flowers in the lower left-hand corner is a hint of events to come.  To the left, on the back, nine cheer positions by Chick, three per row, are shown on the same sky-blue background.  These identical stances are repeated on the front and back of the book case.

A slightly darker shade of the color of Chick's sweater covers the opening and closing endpapers.  On the title page an upside-down Chick holding her floral pom-poms looks right at readers above the text at the top of the page.  On the verso and first page a double-page image of a field filled with flowers crosses the gutter to highlight the cluster of dozen eggs, on the right, with one open.  Chick is popping out from the broken pink egg.

digitally, mixed with scanned in paint textures and pencil drawings

Brian Won tells a merry visual tale enhancing the story line.  Careful readers will notice the additions in each illustration building toward the surprising conclusion.  Some of Brian Won's pictures span two pages, single pages or several smaller illustrations on a single page.

Humor is infused in each one.  The characters are fully animated through their facial features and body postures.  Readers can determine the passage of time and setting through the color of the background sky, from dawn, to daylight, (inside the barn), sunset and a full moon night.

One of my many favorite illustrations is at night.  Chick is quietly reflecting her current state of being.  No one wants to cheer with her.  Shades of deep purple color the sky, tree branches, leaves and grasses.  Portions are dabbled and outlined in a glowing shade due to the full moon on the right.  Chick is resting on a large leaf on the left, looking at the moon.  Our point of view is close to Chick.  The narrative says nothing about the eleven other elements silently watching.


For the endearing character found in Chick, her discovery of self, the found friendships and pure bliss, Cheerful Chick written by Martha Brockenbrough with illustrations by Brian Won is one of those huggable books.  Every single one of us needs people who are cheering for us.  Every single one of us needs to be cheering for one or more individuals.  I highly recommend this title for your professional and personal book collections.