There's A What, Where?

There is nothing quite like hearing a group of children singing and humming a melody as they leave the library.  It all begins in story time but the memory of a tale well-told lingers for days, weeks, and yes, sometimes years.  When a song is attached to a narrative it enables the listeners to recall all the details with clarity, note by note. 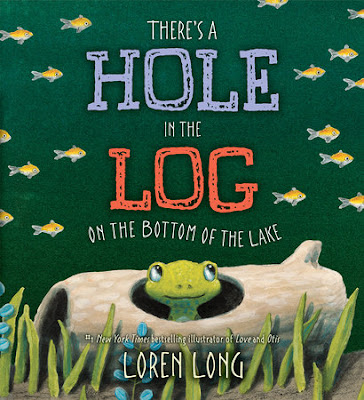 If another story, additional commentary, is added to the narrative of the tune along with charming and humorous illustrations, you are holding a read aloud treasure in your hands.  Illustrated and adapted by author illustrator Loren Long, There's A Hole In The Log On The Bottom Of The Lake (Philomel Books, an imprint of Penguin Random House LLC, September 25, 2018) is a toe-tapping, hand-clapping, knee-slapping and laugh-out-loud rendition.  It's joy you'll want to share as often as possible.

"Do you hear voices?"

A turtle and his companion, a snail, offer observations as the melodic poem unfolds.  This particular log at the bottom of the lake is not whole but has a hole at either end and one right in the middle.  As the snail attempts to right the turtle after an unfortunate tumble, a frog pops up through the hole.

A school of small fish swim near the duo prompting the turtle to hurry and join them.  As the group switches directions, the song notes there is a hair on the top of the frog's head.  (Have you ever seen a hair on a frog?)  It now seems a fly has landed on that hair.  (Is this fly minus the intelligence to survive?  Does it know what frogs eat?)

Just when you think the verses can't get crazier, a gnat lands on the fly.  The frog is directing all its attention on the bugs.  The laws of nature dictate this is never a wise choice.

Another resident of the lake glides into the scene unseen.  Suddenly, those who can scatter in a cloud of stirred-up sand.   There's a . . .


As soon as the familiar text in the song appears, Loren Long skillfully starts to add the remarks of the turtle.  They provide a comical contrast to the traditional tune.  They also add another layer to the narrative leading us to the startling original surprise at the end of the song.  Here is another verse with the turtle's accompanying dialogue.

THERE'S A GNAT ON THE FLY ON THE HAIR
ON THE FROG IN THE HOLE IN THE LOG
ON THE BOTTOM OF THE LAKE.


As soon as you see the frog (on the opened and matching dust jacket and book case) peeking out of the hole in the log at the school of tiny fish swimming overhead, you know this book is going to be a whole lot of fun.  The eyes and slight smile on the frog are loaded with anticipation.  The deep shades of brown, green and blue replicate the underwater view in a lake with excellence.  The light shining on the log, the frog and shimmering on the fish is rays from the sun.  Certain words on the front of the dust jacket are varnished.

To the left, on the back, the image continues over the spine to the far edge.  A large stone or stump extends at an angle along the left side.  On the opening and closing endpapers, Loren has sketched and placed twenty small illustrations of the turtle and snail in various poses in shades of gray on a pale peach canvas.  They are all precious, simply precious.

On the verso and title pages Loren gives us a hint of how the log with the hole lands at the bottom of the lake.  Each of the following double-page pictures, rendered in acrylic and colored pencils, shifts the point of view according to the song and the placement of the turtle and snail.  These alterations give emphasis to the words in the song, the secondary declarations and the slight tension building toward the conclusion.  (It's guaranteed you'll burst out laughing at the final illustration.)

Each of the details in the visuals adds to the hilarity.  The positions and facial expressions on the turtle and snail along with the frog, fly and gnat are sure to bring on the giggles.  The single curly hair and the frog's feet are funnier than funny.

One of my many favorite illustrations is when the frog's head is sticking out of the hole.  His eyes are looking up at the single hair on his head; as if he can't figure out how it got there.  Two of the tiny fish are looking at it.  This portion of the picture is on the right side.  To the left the turtle and snail are floating.  The remainder of the school of fish are swimming off the page to the left.  The expression on the frog's face is hilarious!  The turtle's look is one of shock.


As has been said frequently, there is far too little laughter in our world.  We need it daily.  If you want happy readers, There's A Hole In The Log On The Bottom Of The Lake adapted and illustrated by Loren Long is a surefire hit.  With every verse you will be struggling to keep your tongue from twisting which adds to the total merriment.  You'll probably want to get out your box of instruments to hand out to the children or if this is a read aloud for one or two, start strumming on your preferred string instrument or like turtle, you might want to start guitar lessons.  You will certainly want to add this to your professional and personal collections.

To learn more about Loren Long and his other marvelous work, please visit his website by following the link attached to his name.  Loren maintains accounts on Twitter and Instagram.  At the publisher's website you can view the endpapers.  Enjoy this video with Loren Long singing portions of the song.