Dreamed into reality in 1949, it is still in existence today.  In 1952 it was the first toy to be advertised on television.  Within months it garnered four million dollars for the company.  Most of the households in my neighborhood as a child owned at least one.  It was a star in the 1995 movie, Toy Story.  (And it might be the reason potatoes are my favorite food.)  Mr. Potato Head was inducted into the National Toy Hall of Fame in 2000. 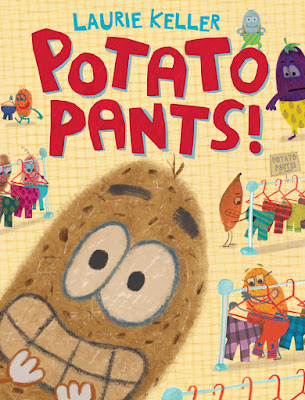 For the vivid and active imaginations of children (and children at heart), adding ears, eyes, a mouth, feet, arms and hands, a nose, and a variety of hats to a potato opens whole new worlds.  Potato Pants! (Christy Ottaviano Books, Henry Holt and Company, October 2, 2018) written and illustrated by Laurie Keller brings to readers a tuber-ific tale of excitement, dread, and compassion liberally loaded with hilarity.  How can you even think the title words without laughing?

POTATO IS EXCITED!
(That's why he's doing the Robot.)

In case you are wondering (a) why a potato is talking and (b) why he's excited, the local pants shop is having a spectacular one-day event.  The owner, Lance Vance, is selling trousers designed particularly for potatoes.  Potato is trying not to panic but the advertisement says

He's early to avoid the spud stampede but his cheer turns to fear when he sees a pineapple-patterned- pant-wearing eggplant standing inside.  He's frozen outside remembering how this very eggplant shoved him into a garbage bin yesterday.  How is he going to get his perfect pair of pants? Potatoes are coming and going and each is wearing new designer duds.

A passerby gives him an idea but a call to a grocery store yields negative results.  Trying to decide what to do next, Potato learns there is only one pair left.  Desire overcomes dismay, he rushes into the store only to discover the pants are gone.  Potato explodes at the injustice.

His anger is short-lived when he learns of damage he caused in his haste to acquire his perfect pair of pants.  His purple nemesis approaches.  In a twist of tater-tastic scope, Potato and Eggplant leave Lance Vance's Fancy Pants Store wiser.


Only someone with a brilliant sense of humor could write a story filled with this much fun.  Laurie Keller has a knack for knowing which words to use to create an exact comedic effect.  Rhyming, alliteration, repetition, and puns heighten the narrative and the conversations of Potato, the other characters and Eggplant.  Here is a passage.

Poor Potato.  It's not easy for him
to watch all the other potatoes walk
by in their new Potato Pants.

I LOVE my new
POTATO PANTS!

We love
OURS,
too!

Mine have
polka dots
and
ruffles!

Mine have
BIG
pockets!

Mine are kind of
SCRATCHY.  I may need some
POTATO UNDERPANTS!


The background seen on the opened dust jacket is like the bags used to package potatoes.  This is very clever.  The smaller images around Potato on the front, right, give readers hints as to the incidents in the story.  One look at the face of Potato on the front is guaranteed to bring on giggles and grins.  It also will have readers wondering why Potato appears frightened.  To the left, on the back, within a potato shape Potato is watching an ad on television announcing the Potato Pants event.

A bright sky blue covers the book case.  Etched in a darker blue Potato does his famous PO-Bot from left to right.  The opening and closing endpapers are a rich, rusty red.  On the title page Potato's perfect pair of pants, the stripey ones with the stripey suspenders are featured.  From the lower right-hand corner an eyeglass-wearing potato, Tuberto, has a few words to say.

Rendered with markers, colored pencils, pen and ink, acrylic paint, potato stamps, collage, and digital drawing the illustrations feature characters looking as if they could leap off the pages.  The large eyes, stick-like hands, arms and feet add to the total funniness of each scene.  Laurie Keller uses a combination of double-page, full page and a collection of smaller illustrations to provide exemplary pacing.

One of my favorite illustrations is of Potato frantically making a phone call.  He is standing on a white canvas framed by speech balloons and text at the top.  He is holding a rather large cell phone with a brand name of Spud Phone to his left ear.  His expression is one of extreme urgency with raised eyebrows, wide eyes, and a large mouth.  His three tufts of hair are standing up.

Potato Pants! written and illustrated by Laurie Keller will generate marvelous merriment for listeners and readers of all ages.  The entire premise promises pure entertainment but there is also a gift for readers in the story.  It's the gift of understanding and truth.  I highly recommend this title for your personal and professional collections.

To learn more about Laurie Keller and her other work, please follow the link attached to her name to access her website.  The cover reveal is found at Publishers Weekly along with a discussion of her professional work with Christy Ottaviano.  At the Nerdy Book Club Laurie talks about the process for writing this book and it's also the premiere of the book trailer.  Laurie has a radio interview about this title on WVXU.  Laurie has an account on Twitter and Instagram.  At the publisher's website you can view interior images. They also have a Teacher's Guide.

(I was doing a search on Pinterest for potato printing and believe me there are lots of ideas for fun using those vegetables but I discovered something else.  Laurie Keller has 188 boards filled with art and things she adores.)
Posted by Xena's Mom at 12:34 AM