In the still of early morning or late-night hours, darkness yields new vistas.  One of the most breathtaking of these, depending on the phase of the moon, is when we lift our eyes to the sky.  The expanse of stars in any season is breathtaking.  To witness this and to be a part of this is both humbling and wondrous. 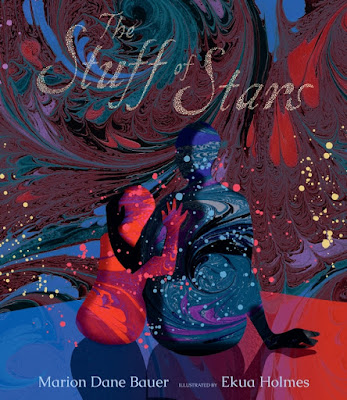 It's almost incomprehensible to realize the ages of stars are measured in billions of years.  The Stuff of Stars (Candlewick Press, September 4, 2018) written by Marion Dane Bauer with illustrations by Ekua Holmes is a stunning depiction in lyrical language and mesmerizing images of life and its beginnings.  It is a journey and an awakening.

There was nothing as we know it, absolutely nothing.  In this darkness there was only this speck.  It was waiting.

These stars burned long and hot.  This time and this heat made some of those stars burst releasing dust; stardust.  This dust gathered and formed planets; planets like Earth circling around a star, our Sun.  Fortunate Earth was the correct distance from its star to be neither too hot nor too cold but shifting from a tolerable hot and cold as it moved.

The stardust continued its role of gathering and forming those things on Earth of which we are familiar.  There were dinosaurs.  Generations of humans came and went until . . .there is another speck

invisible as dreams,
special as Love.

As the previous speck waited, so too, did this one.  It became YOU.


Regardless of where your beliefs are on the spectrum for the origin of life, the words of Marion Dane Bauer are deeply moving.  She conveys the enormity of the beginning of the universe and the formation of each element within it.  In her words there is a fragility but also great power.  As her phrases connect one to the other, she shows us how we are all tied to the past and to the future.  Here is another passage.

And throughout the cosmos
stars caught fire.
Trillions of stars,
but still no planets
to attend those stars.
And if no planets,


Extending from the edge on the left, across the spine and to the edge on the right of the opened dust jacket, the swirl of deep, rich shades of blue, purple and red are pulsing with life and brimming with stars.  The two seated figures are you and me.  They are everyone.  The perspective of this image is two-fold; the beings are elements in the universe but also observing it.  The title text is silver foil.  Words amid the upper portion on the back read:

On the book case a deep midnight blue covers both the left and the right.  Marbleized hues of purple curve and blend over the opening and closing endpapers.  The verso and title pages are a reverse, black text on purple and purple text on black leading us to the time before time.

Each double-and single-page is rendered with

On the larger visuals the text is placed in an area appearing to be designed specifically for it.  For other illustrations a column is created to the left or the right for the text.  Ekua Holmes uses a full color palette reflective of the text.  With the word

One of my many favorite illustrations is for text mentioning bluebirds, butterflies, snails and giraffes.  The hues used are vivid and lavish; black, shades of gray, red, and blue.  The placement of the butterflies and the bluebird cause them to be easily seen but I guarantee when you see the giraffe arching from right to left across the gutter, you will gasp.  It is then the snail comes into view, too.


This presentation, The Stuff of Stars written by Marion Dane Bauer with illustrations by Ekua Holmes, is remarkable.  It is a beautiful symphony of words and art.  Surely it will promote discussions and extensive thinking and research.  You will want to have a copy in your professional and personal collections.

To discover more about Marion Dane Bauer and Ekua Holmes please visit their respective websites by following the links attached to their names.  Marion Dane Bauer has many resources for this title including two Pinterest boards.  Ekua Holmes has an array of artwork at her site.  Both Marion and Ekua maintain accounts on Twitter.  You can find Ekua on Instagram.  At Penguin Random House and Candlewick Press you can view interior images.  Author, reviewer and blogger Julie Danielson speaks about this title and posts one of my favorite illustrations at Seven Impossible Things Before Breakfast.  The cover is revealed at A Fuse #8 Production by Elizabeth Bird, Collection Development Manager of the Evanston Public Library system.
Posted by Xena's Mom at 4:55 PM