During recess, after school and weekends children have been playing it for generations.  Follow the leader is a game of observation and physical and mental agility.  The premise is simple, but the goal can be challenging.  If you look around in the natural world, adults and their young instinctively play their own version. 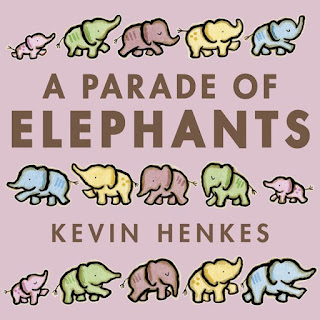 It's a frequent sight in the spring to see a mother duck and her ducklings stopping traffic on roadways as they make their way toward water.  If you happen to see a row of black and white kits trailing behind their parent during a woodland walk, changing your direction is important.  It's never a good idea to be the target of frightened skunks.
A Parade Of Elephants (Greenwillow Books, an imprint of HarperCollinsPublishers, September 25, 2018) written and illustrated by Kevin Henkes is a day journey overflowing with delight.

Count them.  There are one, two, three, four, five elephants.  One in front of the other they move, all in a row.  They aren't walking, they're marching.  It's a parade!

Sometimes they travel in circles.  Nothing keeps them from marching; not even the hills on their path. Marching over a bridge and marching under palm fronds, all five elephants go.  A natural tunnel does not deter their goal.  Nose to tail they are connected like links on a chain.

They are tired.  Each one yawns and stretches but they have one more thing to do before they can sleep.  It is a surprise of sheer wonder.

He is a master of making every single word meaningful.  His short concise sentences and phrases ring out and linger like a bell strike.  Kevin Henkes uses repetition superbly.  His introduction of colors, numbers, and concepts heightens the rhythm of his storytelling.  Here are two sentences.

The pastel, limited color palette of pink, green, purple, yellow and blue with soft chocolate brown for this book appears in all its precious glory on the opened dust jacket. The lift of the elephants' feet and their eyes signal their enjoyment in marching.  To the left, on the back, within a band of white the elephants happily move beneath a sun as butterflies keep them company.  Tiny leaves and flowers dot the ground.  On the front the text and elephants are varnished.

The book case is blue on the front and the back is pink with a wide, textured spine in brown.  A large elephant outlined in brown on the front is facing readers.  On the back, the elephant has his back to us.  On a canvas of the soft chocolate brown five butterflies and a sun with rays in pink are placed on the opening endpapers.  In blue on the closing endpapers are the crescent moon and a handful of five stars.  Beneath the text on the title page the five elephants march.

The matte-finished paper accentuates the softness of Kevin Henkes's illustrations rendered in brown ink and gouache. The first two words are in huge multi-colored type filling the entire page.  The numbering of the elephants extends over two pages; five lines for the addition of each elephant.  This technique of rows is cared to the next two pages with the elephants marching in a larger band of white with a purple band above and below them.

Kevin Henkes employs the band pattern throughout the book.  It fashions a marvelous flow for readers' eyes.  To elevate interest and pacing he inserts full page pictures and double-page images.  It's genius!

One of my favorite illustrations of many is when the concept of over and under appears.  Within a wide band at the top of the page the five elephants are crossing a stone bridge.  Yellow fish leap in the water below them.  The elephants are in constant motion.  Under this first band is a band of purple holding the text.  Along the bottom the five friends are marching through palm fronds.  Kevin Henkes changes the position of their legs and heads to supply more animation.

A Parade Of Elephants written and illustrated by Kevin Henkes is certain to become a favorite in your homes, classrooms and libraries; it will be welcome wherever it is read.  It is one of those books no one will mind reading five times a day or night before bedtime.  I highly recommend this title for your personal and private collections.

To learn more about Kevin Henkes and his other work, please visit his website by using the link attached to his name.  At the publisher's website a teaching guide is provided for this title and some of his other books.  At Kevin's website other resources are available for this book.  Please enjoy the book trailer.