In our region of northern Michigan, the two worst storms of winter 2017-2018 arrived in April.  This was followed by a summer leaving us categorized with severe drought.  Then the rains came in September . . . for weeks.  On the heels of this non-stop rain, our first snow arrived on November 10, 2018 and it's here to stay.  The seasons of my childhood and early adulthood are no longer present.  Our resilient but fragile planet and its inhabitants are in danger.  The National Snow & Ice Data Center recorded in October 2018 the third lowest extent of ice in the Arctic region between the dates of 1979 and 2018 according to satellite records.

The 12 lowest September ice extents over the satellite record have all occurred since 2007. 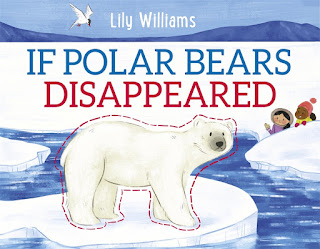 If Polar Bears Disappeared (Roaring Brook Press, August 28, 2018) written and illustrated by Lily Williams discusses polar bears, other Arctic animals and their habitats.  More importantly this is tied to the current and future state of sea ice in the region.  Lily Williams clearly presents how all areas and life on this Earth are critically tied together.

THIS IS THE ARCTIC.  It's an ecosystem in the far northern region of the globe.

Of the limited animals residing here, they've adapted to the conditions.  One of these creatures is the polar bear.  Descended from brown bears it changed its habits (and its color) to revolve around sea ice. Sea ice is essential for food (and travel and reproduction.) The lack of sea ice and thus, food, for polar bears creates a ripple effect.

Without polar bears the population of ringed seals, their main entree, would rise but they would soon find themselves in the same position, without any sea ice, as polar bears.  Orcas, like polar bears, feast on seals.  Without sea ice access is easier but the numbers of seals would drastically decline.  Forced to move south for food, the presence of orcas would be problematic for other large predators.

Sea ice shields the landscape from the sun.  The increase in heat would be devastating for plant life.  Animals needing plants for food, like caribou, would suffer.  Land animals who rely on snow for shelter and protection would be victims of these new conditions.  Patterns in the lives of birds would not be maintained without their food, insects.  Everything is tied together.

With the sea ice gone the effects would spread from ecosystem to ecosystem around the world.  Can we save polar bears? Is there a possibility of stopping this?  Yes!  We are not alone in our desire to save these majestic beings.  Great minds are at work.  Read. Search. Act.


For her intended audience (for all of us) Lily Williams writes with clarity.  Her facts and explanations reveal knowledge born of careful research.  Each portion of her narrative is connected to the next with a repetitive phrase.  Although the presented possibilities are frightening, we are given direction and hope.  Here are several passages.

Without enough snow, subnivean
mammals like lemmings, who make
their dens in the snow, would lose
their homes,
exposing them to the harsh
weather and predators, and
decreasing their populations.

With many of the herbivores gone, non-apex
predators such as the snowy owl and Arctic
fox would be the next to lose their main
food sources.


The limited color palette on the opened and matching dust jacket and book case is reflective of the Arctic region and its inhabitants.  The hues of blue and the stark white depict the frigid temperatures and the harshness of the sea and landscape.  It also allows for the startling contrast of red in the title text and the dotted lines around the polar bear.    On the front two characters, seen exploring and learning about the region throughout the book, are introduced.

To the left, on the back, two small cubs on the extended sea ice are outlined in red.  Three seals are featured above them.  In the far distance a large group of animals gather.  The opening and closing endpapers are a breathtaking vista of the northern lights; an upward swirl of greens and purples.  Along the bottom three smaller black figures stand; the three polar bears.

Double-page pictures beginning with the title and verso pages take readers into the Arctic.  The two girls and adult woman on a four-wheeler are buzzing over the snow.  Each illustration elevates the text with a visual interpretation.  Four of the pages contain a grouping of smaller images to coincide with the narrative.  When necessary Lily Williams labels elements in the pictures; names of animals in cross-sections under the snow and how the sun is reflected or absorbed on sea ice or the water.

One of my favorite illustrations is toward the conclusion.  It is a view of mountains of snow and ice.  In the foreground dusk is settling.  Between two peaks the dying rays of the sun shed a pale peach light.  Along the bottom on the left, close to readers, are the two girls and the woman.  They are watching the polar bear and two cubs in the distance.  The cubs are playing. This image leads to the final picture, one filled with hope.


Informative words and illustrations contribute to the power found in If Polar Bears Disappeared written and illustrated by Lily Williams.  At the end of the book readers will find a glossary, passages titled The Arctic Is In Trouble and How You Can Help Save Polar Bears, an author's note, acknowledgements, a bibliography and additional sources.  This back matter is welcome and important to readers.  I highly recommend you include a copy of this title in your professional and personal collections.

To learn more about Lily Williams and her other work, please visit her website by following the link attached to her name.  At a publisher's website you can view eight interior images.  Lily Williams maintains an account on Twitter, and Instagram.  Lily Williams and her editor, Emily Feinberg chat with teacher librarian Matthew Winner on The Children's Book Podcast.
Posted by Xena's Mom at 11:44 PM