The dust jacket, but not the flaps, and the book case are examined. Anticipation builds and questions gather as the volume is held in your hands.  The endpapers may increase the excitement, possibly offering more hints.  If page turns past the title, verso and dedication pages reveal a map, surely an adventure is in the offing.  To encourage reader participation if words invite you to scan QR codes strategically placed throughout the book, you know you are going to be experiencing something out of the ordinary. 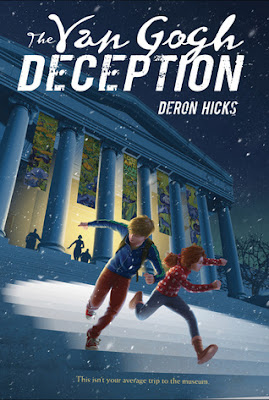 On the dust jacket of The Van Gogh Deception (Houghton Mifflin Harcourt, August 29, 2017) written by Deron Hicks, two tweens are running down the steps of the National Art Gallery in Washington, D. C.  Shadowy figures watch from the top of the steps.  Already we know trouble is surrounding these two children.  The opening and closing endpapers feature three paintings by Vincent van Gogh.  Interestingly enough those on the back, have been altered.  Specific places in a radius around the gallery have been named on a map.  Why?  With the added inclusion of the QR codes the stage is set for a true page-turner and thrilling present-day, high-stakes mystery.  Once you start this book, you, like the children on the run, won't be able to stop.

PROLOGUE
The boy appeared out of nowhere.

This boy sits in a room filled with people, paintings and sculptures.  Who is watching him?  How long has he been there?  Why is he there?  These unanswered queries lead us into the first part.

First we travel to France three years ago.  A highly-planned plot of trickery involving enormous sums of money is put into play.  This is followed by a terrifying scene in a parking garage late at night in present day Washington, D. C. It does not end well for the gentleman being pursued.

The boy from the prologue is the center from which all further action radiates.  There is also the spider.  At closing time a docent from the gallery comes up to the boy.  It is discovered he has no recollection of why he is there or who he is.  He has lost his most recent memories.  Examined by two different doctors and questioned by Detective Brooke Evans at the Metropolitan Police Department, he is eventually placed in the care of Mary Sullivan who fosters children temporarily.  She has a ten-year-old daughter named Camille.

After conversations that evening and in the following morning, the Sullivans and the twelve-year-old boy they are calling Art, decide to take the train back to the National Gallery of Art hoping it will help him to recall more memories.  At the same time a highly trained group of covert operators guided by a leader, Dorchek Palmer, a millionaire ten times over, twenty-eight years old and a computer genius, are in pursuit of the boy.  He needs to be taken by any means necessary.

Mounting tensions escalate in part two when Art and Camille and Mary Sullivan are getting a snack in the Garden Cafe in the gallery.  Dorchek Palmer is seated a few tables away.  A sudden recognition as to a clue in Art's pocket has the children quickly leaving.  Mary panics when she discovers the children are missing.  Palmer and his team give chase.

In less than an hour the children realize their very lives are in terrible danger.  High-speed action at every page turn tests the resourcefulness of Art, who still does not remember recent circumstances or his name, and Camille.  They are pitted against the best money can buy.  Time is running out for everyone.

Two final destinations will test the ingenuity of the children and the skill of the highly trained adults.  Their goals are at odds; one to reveal a forgery and the other to keep it concealed.  Survival is paramount.


The page and one-half page prologue will hook readers immediately.  When author Deron Hicks follows this with the multi-million dollar forgery scheme meeting and the parking garage confrontation, you know hours will be willingly spent following this story to the end.  By dividing the narrative into three separate parts Hicks intensifies the action.  (An appropriate Vincent van Gogh quote begins these parts.)  It is increased further with time of day, date and place notations at the beginning of almost all the chapters and even within the chapters.  The majority of this 306 page book takes place in a single day.

Descriptions of places, famous artists, their work and the criminal activity of forgery do not detract from the fast flowing tale.  The dialogue between the children and all the adult characters is realistic and true to the genre.  Deron Hicks also has an adept knack for ending his chapters with edge-of-your-seat comments. Here are a few of my marked passages.

The middle-aged man wanted to laugh.  There was no way he would ever be allowed to go free.  He'd be lucky to make it through the rest of the night alive.  But he didn't panic.  There was too much at stake.  He backed up against the trunk of his rental car and took a deep breath.  It was time.

Palmer pushed the button on the side of his watch to illuminate the time.  It was getting late, but he knew that there would not be any sleep tonight.  Events had taken an unexpected turn the night before, and the stakes had increased significantly---the spider was loose in the city.

The man paused.  Palmer could tell there was something else the man wanted---needed---to ask.
"And what happens to the boy when you find him?" the man finally asked in a low voice.
Palmer carefully folded up the newspaper and took a final sip of his americano.  Before he stood to depart, he reached down to pick up his messenger bag and looked the man directly in the eyes.  "There are questions, Dr. Belette, that you should not ask."


This book, The Van Gogh Deception written by Deron Hicks, is one you will need to add to your collections to broaden and deepen your mystery, adventure and thriller titles.  It's going to be eagerly passed from reader to reader.  I can't wait for the opportunity to chat with others about it.  (I read it once as fast as I could and more slowly today.)