Students and library users in general, regardless of their knowledge of the particular classification system being used, can, without hesitation, direct you to the section in their school and public library housing their favorite books.  If they have not been taught fiction is alphabetical, they still know where to look.  Without mastering the Dewey Decimal Classification they can find the shelves holding the animal books.

If their resident librarian is nearby, they will tell them they can find their favorite books in any library if they know a few simple facts.  Fiction books are generally alphabetical by the author's last name.  It really is as easy as ABC.  Nonfiction books are found in numerical order.  It's as simple as first counting by hundreds.  For most early library users the best practice is to memorize their favorite nonfiction number.  For those animal books it's 590. 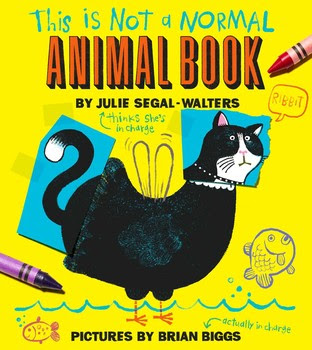 Some books break the mold when determining where they are to be shelved.  It can be tricky to decide whether it's fiction or nonfiction.  It can be much harder to figure out if it's really about the subject noted in the title.  This Is Not a Normal Animal Book (A Paula Wiseman Book, Simon & Schuster Books For Young Readers, November 7, 2017) written by Julie Segal-Walters with pictures by Brian Biggs is one of those books.  And it's rip-roaring hilarious!

Animals can be classified into groups by
their unique traits.

Here are some examples of
each category:

everything begins to get a little crazy.  The other narrator (illustrator) has a completely different approach to the topic.

He first features the cat laying an egg because that's what the text said.  After the author shouts out the intended reply, the illustrator complies with a yellow note taped to the page showing a hen with an egg.  Each time the story continues in the voice of the author, the current animal switches activities changing it into another animal.

This, of course, makes absolutely no sense whatsoever to the illustrator.  How can hopping on a lily pod make you a frog?  What do frogs and honey have in common?  The illustrator, in full mad-scientist mode, starts inventing creatures and names until the author puts a halt to it with a more detailed description of traits.

As the author continues with explicit characteristics, the illustrator voices his disapproval.  His artistic interpretation is being called into question.  The book comes to a screeching stop when the author names an animal the illustrator does not want to draw.  After failed attempts at how-about-this, a compromise seems to be reached.  No. Yes. What?!


This is one of those books when you read and read it again and read it still one more time, it becomes funnier and funnier.  You wonder how much laughter filled the room when debut author Julie Segal-Walters was writing this book.  The pacing is impeccable as the frustration on the part of the author and illustrator, within this narrative, heightens as they start to feel the process deteriorate.  The illustrator is struggling with the presentation of a mammal, bird, amphibian, insect and reptile.  As the author's final two choices are noted the illustrator's responses are guaranteed to have readers rolling on the floor with uncontrollable giggling.  Clearly this author and illustrator do not share the same vision.  Here is a passage.

If the bee slithered and hissed . . .
Oh, come on.
it would be a snake.
A plain green garter snake!
With a stripe down its back!
Look. You write the
words YOUR way.
I'll draw the pictures
MY way.


By all the extra elements on the front and back of the unfolded dust jacket you can't help but notice someone, the illustrator, is making adjustments.  The bright yellow background helps to draw the reader's attention to those changes.  On the back, to the left, on a white background a photograph of the selected amphibian is attached to a portion of the insect with scotch tape.  Crayon drawings visualize other attempts.  As on the front a crayon is shown along with an eraser.  The book case is bright yellow, front and back.  The title is Animal Book.  Beneath it is a hen.  This is utterly plain and simple.

On the opening and closing endpapers an assortment of orange wide-eyed animals are placed on the yellow background.  The animal shown at the end of the book is placed under the text on the initial title page, a foreshadowing of the last straw.  On the more formal title page the illustrator is back making humorous alterations.  A full color display of animals, several from each group, is shown on the first single page image.

In the following illustrations Brian Biggs moves from single page pictures, page edge to page edge, pages with notes taped to the page, crayons, photographs, paper cut-outs and jelly and other revisions to two pages of what can only be named as pure confusion or playful peevishness.  The font style changes between the voice of the author, normal typeface, and the illustrator, hand-written in crayon.  As the exasperation on the part of the illustrator grows so does the text and image sizes.  The author's annoyance escalates in the form of single words followed by periods and the use of exclamation points and capital letters.

One of my favorite, of numerous, illustrations is when the cat is bending over and looking at the egg.  The look of puzzlement on its face is enough to summon spontaneous grins, if not outright laughter.  This is one of the gifts Brian Biggs gives to readers; the comic expressions on the animals' faces when they notice the odd situations.


If you're looking for a book about the collaborative and creative process AND animals, This Is Not a Normal Animal Book written by Julie Segal-Walters with pictures by Brian Biggs is an excellent title.  It is read aloud gold which urges the use of voices for each character.  The Facts about Animals page at the end does give a fact about each animal but the illustrator has other thoughts which appear in orange crayon.

Insects
Insects have three-part bodies and outnumber all other animals.
They have VERY stinky feet.

I can't imagine any collection, professional or personal, without a copy of this book.

Please visit the websites of Julie Segal-Walters and Brian Biggs to learn more about them and their other work by following the links attached to their names.  Teacher guides at Julie's site are here.  Julie is a featured guest writer at Picture Book Month's website in 2017.  At author Vivian Kirkfield's site, Picture Books Help Kids Soar, Julie Segal-Walters is interviewed.  At Brian's site there are several posts about this title.  You can view interior images at the publisher's website.

At Scholastic's Ambassador of School Libraries, John Schumacher's blog, Watch. Connect. Read., the cover reveal for the dust jacket is featured with an interview with Brian Biggs.  On the same date, educator extraordinaire, Colby Sharp, chats with Julie Segal-Walters at SHARPREAD with her case cover reveal in one of his 5, 4, 3, 2, 1 interviews.  Both Julie Segal-Walters and Brian Biggs visit with teacher librarian Matthew Winner at All The Wonders, Episode 401.
Posted by Xena's Mom at 9:11 PM