It all starts with a single sneeze.  This is usually followed with an increase in sneezes over the course of two or three days.  Despite your best defensive efforts, you find your ability to breathe hindered by a stuffy nose.  It hurts to swallow because of your sore throat.  When you speak, it's as if a frog has set up residence in your vocal chords. There's no doubt about it, you have acquired a cold. 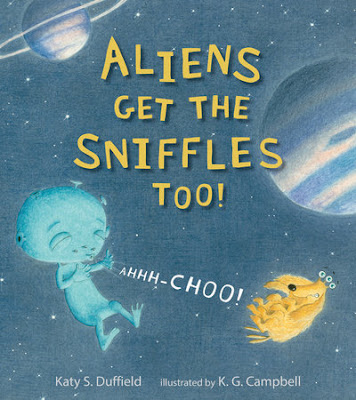 The length of this misery is determined by numerous factors.  In your humble opinion, whatever it takes to speed your body to wellness is welcome.  Aliens Get The Sniffles Too! Ahhh-Choo! (Candlewick Press, November 7, 2017) written by Katy S. Duffield with illustrations by K. G. Campbell is a lighthearted look at the best remedy no matter where you live.

And sick is extra-terrestrial bad when you have two throats, five ears, and three noses.

When he sneezes it's not a simple ahhh-choo!  Each one holds words previously uttered by earthlings.  His parents listen sympathetically when he tells them his throats feel rough.

Daddy Alien whooshes off in his interstellar vehicle.  In no time at all he returns with a tasty treat for Little Alien to ease the pain in his throats.  He is not sure if it helped his throats because his five ears are aching.

a Little Dipperful of water.

Little Alien does not feel like he is on the road to recovery.  Instead he announces to his parents his noses are blocked.  How is he supposed to breathe?  Their final attempts at a cure have Mars Rover, Little Alien's canine companion, with eight legs and three eyes, deciding he needs to take matters into his own considerable paws.

Like a one-dog variety show Mars Rover begins his routines.  He is a nonstop bundle of energy.  Wait!  Was that a smile on Little Alien's face?  Saturn's rings become props in one of the acts.  In his last stunt Mars Rover heads into the starry expanse.  One look and one listen at Little Alien and the pooch knows best friends can work miracles.  Ahhh. . .!


Author Katy S. Duffield weaves extraterrestrial lingo with ease into a humorous tale destined to assist readers under the weather.  Each uncomfortable symptom is cleverly described and enhanced by the physical characteristics of Little Alien.  By blending dialogue with the narrative text readers can more readily identify with Little Alien's suffering and his parent's and Mars Rover's efforts to help him.  Katy S. Duffield clearly knows how dogs can sense better than any other individual how to best assist a buddy.  Here is a passage.

"Which nose did that come from?" Mama Alien cried.


Careful readers will immediately note the physical characteristic of Little Alien and Mars Rover on the opened and matching dust jacket and book case.  They will be counting ears, noses, fingers, paws, eyes and tails.  The fact the duo seem to be floating among planets will be duly noted.  The starry scene extends over the spine (as does one of the rings) to reveal three other odd (by Earth standards) looking creatures.  Their green rectangular heads are peeking in from the left, top and bottom.  Each of them is holding a gizmo.  Could these be the

A shade of blue akin to the coloring of Little Alien covers the opening and closing endpapers.  At the first page turn on a canvas of pristine white is Little Alien's stuffed toy.  In a small circle beneath the title text on the second page alien abodes with pink smoke coming from their chimneys are shown.

Rendered in pen, watercolor, and colored pencils the illustrations of K. G. Campbell using the pastel shades of pink, blue, green and purple in combination with the golden hue of Mars Rover create an other-worldly atmosphere.  The sizes of the visuals, two-page pictures, single page illustrations loosely framed in white or placed on a white canvas, or single page images, page edge to page edge convey the mood and pacing with excellence. The large expressive eyes on all the characters portray appropriate concern, misery, dismay and happiness.  They are guaranteed to have readers and listeners chuckling in agreement.

In this single page image, through the circular window, we can see Saturn hanging in the starry sky.  Daddy Alien sits in a floating chair on the right holding the ear drop dispenser.  Mars Rover floats next to him watching Mama Alien mix the stardust with the water.  Little Alien bends over with rapt attention.  The Little Dipper, held by Mama Alien, glows with individual stars.  It is a hopeful moment.


With the advent of the winter season most families are struggling to keep everyone healthy.  Aliens Get The Sniffles Too!  Ahhh! Choo! written by Katy S. Duffield with illustrations by K. G. Campbell is sure to lift the spirits of readers regardless of their current state of health.  Most of us know exactly how Little Alien is feeling.  And we know there is nothing like a forever friend making a less than ideal situation far better.  Your professional and personal bookshelves need the dose of laughter this title will bring.  It would be fun to pair this title with Bob, Not Bob! (To be read as though you have the worst cold ever:)(Disney Hyperion, February 14, 2017) written by Liz Garton Scanlon and Audrey Vernick with illustrations by Matthew Cordell.

To learn more about Katy S. Duffield and K. G. Campbell and their other work, please follow the links attached to their names to access their respective websites.  At Katy S. Duffield's website there is an Activity Guide.  At Penguin Random House you can view interior images different than the one found at Candlewick Press.  You can discover more about K. G. Campbell and his art at Brightly and Painted Words.  Enjoy the book trailer.