I Must Have My BFF

True friendships are a valued state of being, sometimes fragile but still with the strength of steel should circumstances present themselves.  At times we look at friendships, ours and others, wondering how the relationship endures. The individuals involved are totally opposite, two sides of the same coin. 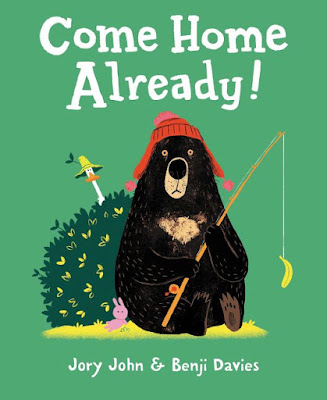 These companionships are worth noting because they reveal the complexity of personality characteristics.  They also, if we are being truthful, supply us with endless happiness at the comedy the contrasts provide.  When we met a reluctant bear and an over-zealous duck in Goodnight Already! (Harper, an imprint of HarperCollinsPublishers, December 2, 2014) we knew this was a duo destined to find a cherished place in our reader's heart held open for laughter.  In the following title, I Love You Already! (Harper, an imprint of HarperCollinsPublishers, December 22, 2015) both members of this twosome freely admit, even momentarily, how important their affection is for each other.  Come Home Already! (Harper, an imprint of HarperCollinsPublishers, December 5, 2017) written by Jory John with illustrations by Benji Davies will have you smiling as soon as you see the dust jacket and you'll be laughing out loud at the book case.  The story inside will have your sides aching from pure glee.

"Another glorious morning
full of possibility!"

Duck, beverage in hand and munching on breakfast, can hardly wait to see what his best buddy, Bear, is doing.  Once at Bear's home knocking at the door and listening at the keyhole result in silence.  It's only when Duck looks up he finds an explanation for the quiet.  Bear has gone fishing . . . for a week.

Duck is aghast.  He can't believe he wasn't invited to go.  He wonders how he will survive an entire week without his friend.  Meanwhile . . .

Bear is traveling on a well-known path through the woods to his favorite camping spot next to a lake.  He is happier than happy to be alone.  He is soaking up all the peacefulness of his surroundings.

Back at inside Bear's home Duck is unsuccessfully trying to convince himself he will be perfectly okay.  He tries to occupy himself but nothing works.  He's bored.  He's alone.  He wants Bear to come home.  At the lake Bear is having another set of numerous problems.  To make it worse, it's raining.

True to his nature, Duck, efficient, organized and energized, has a plan.  Surprises are in store for both friends . . . and readers.  Duck's parting words on the last page bring on the Bear stare we know so well.  It's certain you will be closing the book laughing loud and long.


As in the previous two titles Jory John begins with Duck going next door to Bear's house, he uses the technique of grouping phrases to further define a situation, in these groups of phrases he will repeat one of them followed by

"Wait, I already
said that."

"You already said that"

and at some point there will be a loud exclamation.  In this story a switch is in play.  Duck and Bear are separated in the beginning.

We alternate between their two versions with a subtle tension developing until they are joined by a single soft word.  This is the point when you feel a change is coming.  There has already been humor galore in the two narratives but you know it's going to be heightened.  You know another truth about the relationship is going to be revealed.  Here are a few sentences when Duck discovers Bear is gone.


The look on Bear's face on the front and back, right and left, of the unfolded dust jacket has him in a continuous daze whenever he thinks about Duck or is in the presence of Duck.  The feathered talk machine never gives him one peaceful moment.  The banana hanging on the end of his fishing pole is a bit of a hint at events to come.  On the back Bear and Duck are walking along carrying camping gear, the one in silence and the other chattering nonstop, a wing extended to make a point.

Across the book case, as a canvas, is a pattern of small orange and yellow diamonds.  In the center of the front and back are dark forest green larger diamonds.  On the right Bear,, wearing his red hat with flaps, is holding his pink bunny.  He is scared.  On the left we see the same picture but Bear's back is to us.  Behind him is Duck with a wing tip to his lips, forming Shhhh...  (I dare you to look at this and not laugh.)  The opening and closing endpapers are orange.

On the title page Bear is already walking, gear on his back and map in hand.  On the verso and dedication pages we see the sun rising over the evergreens behind the two neighbors' houses.  Benji Davies uses each page to begin his visual interpretation.

Depending on the setting the background colors from page to page vary between yellow, pale blue, orange, spring green, darker teal, forest green, rainy day blue, and night sky blue.  Benji Davies alternates his image sizes and perspectives to flow with the narrative pacing.  Readers will enjoy the added details; the duck springing out of Duck's cuckoo clock, the map Bear uses to get to his favorite camping place, the presence of Bear's little pink stuffed bunny, the titles on books, and the banana.

There are many, many funny and favorite pictures in this book.  Two of my favorite ones are of Duck climbing into Bear's house through the kitchen window over the sink.  He's so at ease with entering, one foot on the counter and one wing holding up the window.  The other picture is of Bear at the lake.  His back is to us next to the water on one side and a large evergreen on his other side.  A wire tent frame is zig-zagged across his back.  Tent stakes and a hammer are scattered on the ground. He is trying to stretch out the tent with his paws and one of his feet.  It is not going well.


It's like a breath of fresh air to have this duo back in another book.  Come Home Already! written by Jory John with illustrations by Benji Davies will have you smiling and laughing no matter how many times you read it.  And you will go back and revisit the other two books too.  Readers are going to thank you for reading it during story time and ask you to read it again.  You will certainly want a copy for your professional collection and your collection at home.

To learn more about Jory John and Benji Davies and their other work, please access their respective websites by following the links attached to their names.  Jory John has a Tumblr account.  Benji Davies also has a blog.  You can watch the child friendly book trailer at the publisher's website.  Jory John is featured at Scholastic's Ambassador of School Libraries John Schumacher's blog, Watch. Connect. Read. and at Brightly.  Miss Marple's Musings showcases Benji Davies.  This past summer musical wizard Emily Arrow released a song about the second title.  Enjoy.