Gals and guys around the world wait for his return every year.  Letters are written to him.  Some are sent to the North Pole.  Other notes are placed for him to find when he visits.  Depending on the country and customs, treats are left for him to enjoy; perhaps cookies, milk and carrots for his reindeer. 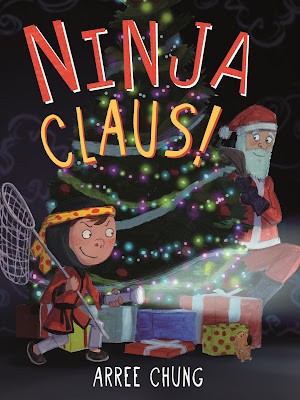 Last year, I slept through all of it.

Santa Claus ate the cookies, drank the milk and a hamster named Ted became Maxwell's new furry friend.  This year Maxwell has a plan.  He is going to set a ninja-style trap for Santa.

First he writes a rather long note to Santa with specific instructions.  When Santa pauses to eat the cookies and drink the milk, he needs to sit in the red chair.  Despite camping out in the living room, Maxwell ends up fast asleep in his own bedroom upstairs.  (Mama has her own ninja talents.)

Loud noises in the living room wake Maxwell up.  He's in full ninja mode with Ted scurrying along with him.  He grabs his net and flashlight. Oops! Brutus gets nabbed in the net.  Now a boy, his hamster and the family dog are determined to discover the source of the commotion.

No one is more surprised than the ninja and the party in his trap when the flashlight beam shines on the red chair.  Mama swoops into the scene herding everyone back to bed.  Goodnights are said like the familiar close of the Waltons.

Now the most skilled ninja of all ninjas gets right to work.  Morning brings one revelation after another to more than one individual.  A promise is made for next year.


Using a blend of first person narration, letters, sound effects and dialogue Arree Chung supplies readers with a lively story of a persistent boy who lives and breathes life as a ninja.  Woven into the tale are ninja characteristic truths, providing contrasts to what is actually happening.  From one moment to the next humor is prevalent.  You will find yourself unable to contain your laughter on more than one occasion.   Here is a sample.

A ninja isn't afraid of the dark.


Upon opening the dust jacket (I'm working with an F & G.) the darkened-room background continues to the left, on the back, highlighting the two earlier titles with professional reviewer recommendations.  On the front the title text is a mix of the red and yellow text and white and red backgrounds on the two earlier books.  It works wonderfully with Maxwell's ninja attire and Santa Claus.  With the glimmer of the lights on the tree and the beam of light from Maxwell's flashlight, the image is loaded with atmosphere.

Spread across the opening endpapers on a desk are envelopes addressed to Santa and a letter to him too.  On the closing endpapers is the table holding the plate with less cookies and the empty glass.  Next to them is a note from Maxwell to Santa full of gratitude and the promise.  The title page features the family fireplace and mantle decorated with a garland and stockings filled with presents.  Maxwell is in front of the fireplace laying a trap.

Rendered in acrylic paint on Rives BFK paper, found paper, and Adobe Photoshop the illustrations vary in size.  Several span two pages and single pages.  To provide pacing Arree Chung uses a combination of wordless panels, some rectangular and square and others in shapes indicating rising action.  These panels are framed in thick black lines with uneven edges, like brush strokes.  You can't look at the expressions on the characters' faces without smiling or bursting into giggles.  And be sure to notice the little extra details by watching Ted.

One of my many favorite illustrations covers two pages.  It is in the middle of the night.  Four large sounds in yellow are placed along the top.  Maxwell is sitting straight up in bed thinking this is Santa.  His eyes and mouth couldn't be more wide open.  His two favorite stuffed animals are next to him tucked under the covers.  On the table next to his bed is Ted's bed.  Ted is awake, open-mouthed and wearing a blue sleeping cap.


The first time I read Ninja Claus! written and illustrated by Arree Chung I adored it.  And after subsequent readings I still do.  Readers of all ages (trust me) are going find themselves grinning from beginning to end.  Plan on at least one copy for your professional and personal bookshelves.  This would make a wonderful gift (along with the other two titles, too).

To learn more about Arree Chung and his other work please follow the link attached to his name to access his website.  Arree Chung has a blog here.  It has a lot of good background information.  At the publisher's website you can view interior images. Arree has some on his website too.
Posted by Xena's Mom at 12:56 AM