Making A Stop On Deckawoo Drive

We all know people who have a day to day routine set in stone.  They are the people who believe a place for everything and everything in its place.  They simply can't handle any deviation from the way they believe all things should be.  These demands they place on themselves and others tend to make them cranky. 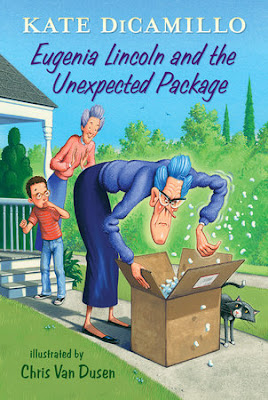 This persistent peevishness in many (every) situations is so contrary to what others say and do, it's hard not to burst out laughing.  In Eugenia Lincoln and the Unexpected Package (Candlewick Press, October 10, 2017) written by Kate DiCamillo with illustrations by Chris Van Dusen, the latest entry in the Tales from Deckawoo Drive series, the story revolves around such a person, a very outspoken, familiar person. Her world is about to be turned upside down and inside out.

Eugenia Lincoln was a practical person, a sensible person.  She did not have time for poetry, geegaws, whoop-de-whoops, or frivolity.

Given her personality Eugenia was not happy when a deliveryman brought a large package to their door addressed to her.  It was not expected.  No one, including her sister Baby, had any idea who sent it and what was inside.  Neighbors Frank, a boy and Mrs. Watson and her pig, Mercy, arrived to speculate about the contents.  Against her better judgment Eugenia opened the box.  An accordion?!

Eugenia wanted an accordion like she wanted the proverbial hole in her head.  To make matters worse the company who sent it refused to take it back.  The only thing to do was make a list.

When a constantly-grinning, I-can-do-anything kind of man in a green velvet suit with a green velvet hat appeared at their door the next morning, Eugenia was sure he wanted to buy the accordion.  He did not.  He was there to teach her accordion lessons.  What?!  When he strolled right into their home, she was flabbergasted.  Had the world gone crazy?

In no time at all Mr. and Mrs. Watson with Mercy and Frank were gathered in the kitchen.  Events quickly became unbearable for Eugenia.  To make matters worse a huge storm was raging outside.  Eugenia left for her room with General Washington, her cat, and hid under the covers on her bed.

When she woke up the next morning and came downstairs she was shocked several times by what she saw.  Deciding to take drastic measures, Eugenia, with surprisingly no plan in mind, and General Washington left 52 Deckawoo Drive carrying the source of all her troubles.  A voice from above and a request released a song held in a heart for too long.


When Kate DiCamillo writes readers can be sure to glean hidden nuggets of truth and love carefully tucked into her narratives.  These are heartfelt to the point you want to underline them or copy them into a notebook to savor later.  As you read the eight chapters and the concluding coda in this title, each ends with a single sentence, thought or spoken word signaling the end but also offering a beginning.  Lighthearted humor permeates this story through the events described by Eugenia's observations.  You will most assuredly find yourself smiling often and laughing out loud.  Here are some sample passages.

Eugenia Lincoln was very fond of lists.
They helped her think.  Lists calmed her.
They made the world seem orderly and
reasonable and manageable, even though
the world was none of those things.

"No, no," said Gaston.  "I am here only
for your lessons, so you may learn to play
the sweet songs and the sad songs and all
the little songs in between."
"I refuse," said Eugenia.
"You refuse to learn to play the music
that is waiting inside of your heart?"


Rendered in gouache by Chris Van Dusen the illustrations throughout this title add to the energy and hilarity.  Study the expressions on the characters' faces on the front of the dust jacket.  You see curiosity on Frank's face, nearly unbridled joy on Baby Lincoln's face and pure disdain on Eugenia Lincoln's face.  These are their personalities in a nutshell.  To the left on the back, is a panoramic view of Deckawoo Drive.  The book case is a darker shade of purple, textured in tiny diamonds.  The opening and closing endpapers are lavender with dark musical notes drifting down the middle.

There are only a few page turns without an image.  They vary in size depending on the plot of the story; extending a point and providing pacing.  They are expertly placed within the text. The settings, architecture and clothing are slightly retro.

One of my many, many favorite illustrations is the first one.  It's a close-up of Eugenia Lincoln standing on the edge of the front porch of their home.  She is leaning to her right with her hand on the railing.  Her left hand is strategically placed on her left hip.  Her right foot is crossed over the left foot.  She is standing with a slight slouch.  Her face has the quintessential gaze of a complete grouch.


Eugenia Lincoln and the Unexpected Package written by Kate DiCamillo with illustrations by Chris Van Dusen is another stellar entry in this delightful collection.  In this title joy is searching for a way into a hardened heart.  The mystery of who sent the package adds an extra element to this tale.  I can't imagine a professional bookshelf without this title.  My copy for my collection arrived yesterday.  (I've already read it three times.)  If you desire to read all of the Mercy Watson and Deckawoo Drive books as I do annually, you can read about all of the previous titles in a blog post written here.

To learn more about Kate DiCamillo and Chris Van Dusen and their other work, please follow the links attached to their names.  At Candlewick Press you can view an interior image.  They also supply a teacher's guide.  At Penguin Random House they allow you a peek at twenty-one pages.  There is a special website specifically for the Mercy Watson and Deckawoo Drive titles. Both Kate DiCamillo and Chris Van Dusen were interviewed at Reading Rockets here and here.
Posted by Xena's Mom at 6:29 PM