The Gleam Of Green

When the world of reality collides with the realm of imagination within the pages of a book, it's easy to find yourself gasping, sighing, laughing or crying in the most public of places.  You're so thoroughly a part of the story; you literally forget where you are.  Everything and anything is possible.  We all know what is perfectly normal can be transformed into something frightening, outlandish, unpredictable and unforgettable. 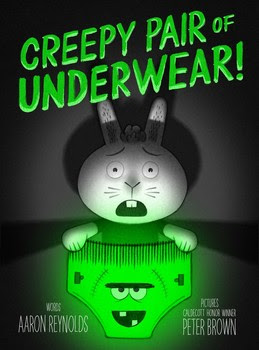 Five years ago Creepy Carrots! (Simon & Schuster Books for Young Readers, August 21, 2012)(2013 Caldecott Honor Book) left readers warily wandering through the vegetable section of their neighborhood grocery stores.  As these roots now become a part of our meals or snacks, we half expect them to talk to us or walk out of the kitchen thanks to collaborators, author Aaron Reynolds and illustrator Peter Brown.  Two days ago standing in the middle of a Scholastic Book Fair, it was exceedingly difficult not to burst out laughing while reading the companion title, Creepy Pair of Underwear! (Simon & Schuster Books for Young Readers, August 15, 2017).  Our bewildered bunny is back!

Jasper Rabbit needed new underwear.
On Thursday Mom took him to the underwear store
and grabbed the last three packages of Plain White.

Before they could pay and leave, something caught Jasper's attention.  It was an enormous display for Creepy Underwear.  They were neon green, with a Frankenstein face on the front.  After Jasper reminded his mom he was no longer a tiny tyke, she agreed to a single pair of creepy underwear.

Jasper proudly put on the new ghastly undies before heading to bed.  He declined his dad's request for the hallway light to be left on. In the deep dark of his bedroom he noticed something for the first time.  The cranky creature's countenance glowed in the dark!

You never saw a rabbit move so rapidly.  In a finger snap, the offending attire was stuffed in the hamper and replaced with Plain White.  Imagine his surprise to awake up in the morning wearing the creepy underwear!  What?!

No matter where Jasper put those shimmering pants, where he sent them, or what he did to them, they found their way back to their favorite rabbit.  There was no one to tell.  Who would believe him?  It was time to steer his desperation in another direction.  No one was more surprised than Jasper Rabbit at the results.


When Aaron Reynolds writes about underwear, the usually response, laughter, is replaced with shivers and shudders.  He adeptly uses repetition and alliteration in his depiction of Jasper's actions and the description of the underwear.  Each time Jasper tries to rid himself of the underwear, the fright is gradually replaced with funny in the form of subtle humor.  This leads us expertly to the dual conclusion.  Here is a sample passage.

He closed his eyes.
He pulled up the covers.
He buried his face in his pillow.
But it didn't help.
He could still see that
ghoulish, greenish glow.


The limited color palette, the blend of black, gray, white and green, and the ingenious use of light and shadows not only on the matching dust jacket and book case but throughout the title focus our attention on precisely how creepy these techniques can be.  The neon glowing green hue paired with the white eyes filled with fear on Jasper reaches out and grasps readers.  We realize the rabbit is genuinely terrified.

On the front of the jacket and case we are brought close to him sharing his dread.  To the left, on the back, is a duplication of an interior illustration. Jasper is standing in his bedroom window on the first morning when the creepy underwear has somehow moved from the hamper back to his body.  On a background of black on the opening and closing endpapers are rows of plain white undies except for one pair of creepy underwear.  Careful readers will note the difference between the two.

Each illustration has rounded corners with black frames, like pieces of film or a screen on the first black and white televisions.  Rendered in pencil on paper and then digitally composited and colored by Peter Brown the pictures portray varying perspectives.  Many times it's as if we are indeed watching a movie or television show but we also feel as though we are in the scene with the characters.

The expressions on Jasper's face convincingly convey his jitters but at the same time readers know he's trying to demonstrate he's a bigger bunny, more grown up.  He's also filled with a sense of determination and at times, elation.  The humor increases when readers notice the altered looks on the Frankenstein face on the creepy underwear.  Several will undoubtedly prompt outbursts of laughter.

One of my many favorite pictures is when Jasper first discovers the creepy underwear glow in the dark.  Across two pages, we get a bird's eye view of Jasper's bed.  It extends from the right-hand corner, filling the page, at an angle across the gutter to beyond the center of the left page.  The quilt, patterned in squares like the floors and bathroom tile, is pulled back and held by Jasper to reveal his body.  The creepy underwear is gleaming brightly with an angry scowl on its face.  Jasper looks shocked.


As sure as the full moon casts a spell on the earth below, readers will request this title, Creepy Pair of Underwear! written by Aaron Reynolds with pictures by Peter Brown, to be read to them repeatedly.  It's scary but not too scary and the conclusion will have them howling at the humor.  Readers, like Jasper, will understand rather than trying to hide from your fear, the better outcome might be to face it.  I highly recommend this title for your professional shelves.  It will never be there, passed from reader to reader.  Your personal collection will need a copy too.

To learn more about Aaron Reynolds and Peter Brown and their other work, please follow the links attached to their names to access their websites.  At the publisher's website you can view interior images from the book.  There is also a four page activity kit.  Aaron Reynolds is featured at PictureBooking, Episode 86.  On The New York Times Books Facebook page under Videos Peter Brown draws art from this book, reads portions aloud and chats about his process.