Just one year and one week ago as a participant in the Reading Without Walls Blog Tour, I found myself introduced to mysteries, puzzles, disappearances, clues and coding through reading books one and two in the series Secret Coders written by Gene Luen Yang with art by Mike Holmes.  In that post I highlighted the plots of the books, Secret Coders and Secret Coders Paths & Portals, along with the illustrative work.  To say these books are page-turners, edge-of-your-seat exciting would be an understatement.

Nothing is as it appears at Stately Academy.  Newcomer Hopper and her friends Eni and Josh find themselves right in the middle of less than normal circumstances.  From book to book their coding skills improve.  Readers are invited to join them in using coding to solve puzzles and fight evil-doers.

For this tour Gina Gagliano at First Second sent out a challenge.  We needed to take one of the coding exercises within the narrative of one of four books, try to solve it and tell about our process. 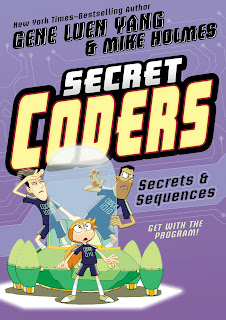 Rereading books one and two was as much fun this time as it was the first time.  Book three, Secret Coders Secrets & Sequences, and book four, Secret Coders Robots & Repeats, give readers answers but more questions too.  As in the first two titles, these books end with a cliff-hanger and puzzle to solve using coding.  The coding in these second two books is more difficult but readers are guided through the steps and given examples, cleverly as part of the storyline. 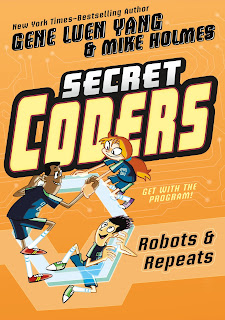 Not quite sure about my coding skills at this point I decided to try solving the challenge at the end of Secret Coders Paths & Portals (book two).  A friend of the children is all tied up with trouble.  A code needs to be written to have a large lawn-mowing turtle move forward a random number of units and turn a random angle.  A repeat of at least 100 needs to be a part of the coding.  This will create a huge distraction so their friend can be rescued.

It was suggested bloggers use an online site called Turtle Academy.  You can register for free.  The first thing I did was review the previous portion of the story introducing repeats and random code.  Then I went to Turtle Academy.  After ten minutes I was having trouble writing code in the space provided but I was determined to use this application.  I discovered I was in the wrong section.  I found the playground.

After about thirty minutes, I figured out how to write code in this program.  I captured my results hoping what I wrote would match what was at the beginning of book three (I did read books three and four but my mind is not wired to code...yet).  My results are more complicated than those in the book but mine does look like chaos which is the entire point.  In my favor I would say mission accomplished! 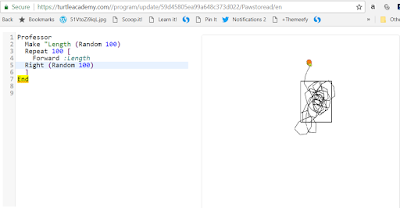 To tell you the truth, this was fun.  I can see where you could spend hours writing code to make this turtle go where you wanted him to go.  Thank you Gina for this opportunity.  I am looking forward to sharing these books with students.  I know they will be as eager as I am to see what happens next in this series.

Here is the link to view the efforts of the other blogger participating in this tour.

Gene Luen Yang is the National Ambassador for Young People's Literature.  He was written and drawn many graphic novels, including American Born Chinese, which was a National Book Award finalist, as well as the winner of the Printz Award and an Eisner Award.  His graphic novel set, Boxers and Saints, won the Los Angeles Times Book Prize.  He has also written for the hit comics Avatar: The Last Airbender and Superman. 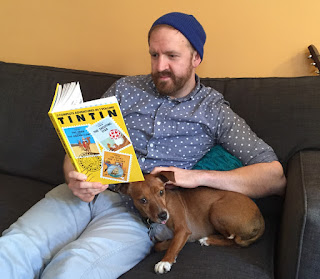 Mike Holmes has drawn for the comic series Bravest Warriors, Adventure Time, Secret Coders, and the viral art project, Mikenesses.  His books include the True Story collection, This American Drive, and Shenanigans.  He lives with a cat named Ella, who is his best buddy.
Posted by Xena's Mom at 12:35 AM