The requests from students to read Christmas stories have already started; especially those tales containing favorite characters.  A thought fleetingly passes through my mind about Halloween not even being over yet, but retail stores have had shelves of December holiday decorations up for several weeks.  Perhaps these children's requests are built upon the belief and the hope this particular holiday season can and will bring out the best in individuals. 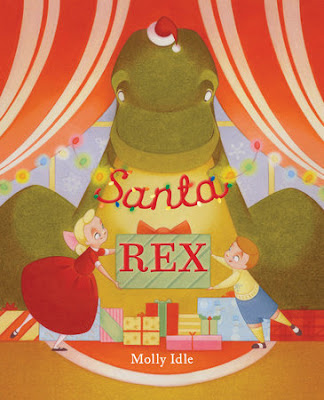 It is a time for friends and family, those we see frequently or those we only see once a year, to gather. Our thoughts turn to tradition and the art of giving.  Santa Rex (Viking, Penguin Young Readers,  an imprint of Penguin Random House LLC, October 17, 2017) written and illustrated by Molly Idle is the fourth title in a series featuring prim and proper Cordelia, her younger brother with his constant teddy bear companion, and their four bigger than big best buddies, Rex, Alan, Rosemary and Clarence.  Each episode with these characters leaves a mark of laughter on your heart.  The one for this book will twinkle.

Don't look up unless you want to see two large eyes peering through the windows above the door.  Yes, readers, Rex and company have arrived to join in the night-before, merry making activities.  If you desire success, you need to have a lengthy to-do list.

Without a minute to spare garlands of holly, chains of paper and strings of popcorn are hung.  The room is filled with inventiveness as paper snowflakes are cut and hung on the windows.  (You might want to pay close attention to your curtains when there's a dinosaur on the premises.)  With the decorations done, it's time to create and bake confections in the kitchen.  They're so yummy, it's nearly impossible to not gobble them in great gulps.

In anticipation of a visit from Santa, it's important to hang your stockings on the fireplace mantle.  If you don't have one or it has been accidentally destroyed, improvise. The final act of the evening is to embellish the evergreen.  There is an order to follow if it is to be done correctly.  If you aren't careful the finishing touch is the crashing final touch.

It's off to bed with visions of a special visit swirling in sleeping minds.  No one is prepared for the spectacle awaiting them downstairs in the morning.  No one could be merrier about this one very special Christmas.


Reading like the simple, but ultimate guide book on celebrating Christmas, our faithful unseen narrator leads us to believe nothing could be easier than following the suggestions.  With these spare statements Molly Idle leaves a wide window open for potential problems to appear for those prone to perfection like Cordelia.  As we read each one our expectations build toward what we surely know is going to be less than normal.  What Molly does, though, with great skill is to leave us with an undeniable truth about this holiday and most importantly, the value of two or more is superior to one.


Whether you have read the three previous titles or not, the front of the matching dust jacket and book case will have you more than a little curious about a Tyrannosaurus rex wearing a Santa hat in front of a pile of presents.  Clearly Cordelia and her younger brother are excited about the possibilities this holiday will bring.  The design and layout are as precise as you might expect if our young lady character is the artist.  This is perfection.  Molly Idle is already welcoming us into a situation which will be loaded with comedic contrasts.  To the left, on the back, are small versions of the three other title front covers with praise from professional reviewers.

The opening and closing endpapers are patterned in large red and white stripes like a close-up of a candy cane.  On the final set there is a very distinct difference. (I'm trying not to laugh as I already imagine the exclamations by the young listeners who will hear me read this story.)  On the title page we are privy to the exquisite care Molly gives to each element in her images.  The word Santa is strung with Christmas lights. The teddy bear is there holding scissors as Cordelia and her brother wrap a gift.  This gift is seen several times in the story but we do not know the contents until the very end.

Each illustration reveals the meticulous selection of color choices for the interior of the home with which we are familiar, the dinosaurs, the attire of the children and the wonderful atmosphere of the holiday.  Hilarity and contrast begin with the list.  The stegosaurus is munching on the end of it.  In fact, you need to watch him.  He eats a lot of things throughout this story.

Molly includes images ranging from glorious two-page pictures to framed single page visuals and also has more than one framed image on a single page.  Those that are framed are done in two thin red lines.  For some of the sentences there will be several pictures enhancing those words.  They usually reflect results guaranteed to generate giggles.  A vertical surprise will have you gasping and grinning.

It's nearly impossible to select a favorite illustration. These pictures are pure charm.  One I enjoy and I know readers will too takes place in the kitchen.  The background is shades of mint green and white appliances with mint green and pale yellow tile flooring.  This draws our attention to the characters.  On the left side of this double-page picture Cordelia in her red dress and red and white striped apron is holding a tray with cookies and a glass of milk for Santa.  She is looking aghast at the disappearance of the rest of the cookies from the table which stretches from left to right across the gutter.  On the right is Rex with a bulging cheek and evidence of the cookie in his tiny hand.  The stegosaurus is consuming the table cloth.  Cordelia's brother is hiding a cookie behind his back and also has a bulging cheek.  His teddy bear, next to him, is hoping some of the cookie crumbs will land close enough for him to grab.


No Christmas collection would be complete without the addition of Santa Rex written and illustrated by Molly Idle.  This beloved cast of characters shines as brightly in this title as they have in the previous titles.  As noted on the front flap

Here is a book that shares one of the happiest spirits of Christmas---laughter.

To learn more about Molly Idle and her other work, please follow the link attached to her name to access her website.  You can get a peek at the endpapers on the publisher's website.  Please take a few moments to enjoy this interview of Molly at Art of the Picture Book.  I have blog posts about Tea Rex, Camp Rex and Sea Rex, the other three delightful and hilarious titles.
Posted by Xena's Mom at 11:08 PM