There are those individuals with hearts so full of compassion they will do anything at any time to come to the assistance of another.  They easily place themselves in the position of the being in dire straits.  All thoughts of their own welfare vanish.  They are the definition of a friend in need is a friend indeed.

If in the course of providing help an adventure should ensue, these individuals will greet every obstacle with unwavering confidence and courage.  In their collaboration Special Delivery (A Neal Porter Book, Roaring Brook Press, March 3, 2015) author Philip C. Stead and illustrator Matthew Cordell introduced us to such a person.  Her name is Sadie. 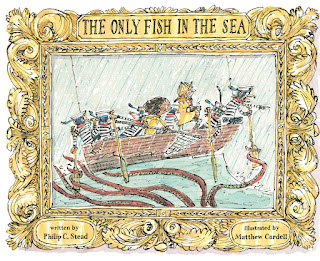 This gal, who will go the extra mile, literally miles and miles, returns in The Only Fish In The Sea (A Neal Porter Book, Roaring Brook Press, August 15, 2017).  Nothing will deter her from her goal.  Nothing.

"Hey, Sadie!  Did you hear about Little Amy Scott?"

Our story opens with Sadie's friend, Sherman, riding his bicycle as fast as his legs will work.  He yells out to her about Amy Scott's birthday present fiasco.  Amy Scott takes her gift of a goldfish, which she says is boring, still in the plastic bag and throws it off the end of the dock into the sea.

Sadie agrees with Sherman about this being a complete misfortune for the tiny creature.  In fact, she thinks it's terrible.  Why would anyone put a goldfish's life in jeopardy?  There is only one thing to do.  Rescue it.

With determination Sadie informs Sherman that Ellsworth (She names the goldfish because that's the kind of human being Sadie is.) will be saved.  There are items to be procured for this effort.  You won't believe why Sadie needs twenty-one pink balloons but as noted previously Sadie is a thoughtful, kind soul.  Although at one point a statement she makes has Sherman worried about the future of the goldfish after it's located.

Sadie and Sherman and six monkeys (Those monkeys from the first book have relocated to Sadie and Sherman's community.) set off across the sea with the monkeys rowing and the friends sipping tea.  It is, of course, raining.  As the wind picks up, sea creatures begin to circle the boat.

On the crest of a wild wave victory is in sight.  One of the passengers simultaneously notices another resident rise from the deep dark waters.  The fate of the rescue rests in the hands of this gallant gal, her friend and the boat's crew.  Back in the center of the village, townsfolk gather in a show of affection.  And what of Little Amy Scott you ask?  You'll have to read the book, dear reader.


To have Philip C. Stead bring back a protagonist and her cast of characters is cause for celebration.  As in the previous title dialogue opens before the title page in the form of Sherman trying to get Sadie's attention.  You can feel the gentle tension and excitement already starting to build with this technique.

Sadie, true to her personality as created by Stead, is ready to do whatever it takes to save that goldfish.  This time she carefully plans and stocks the proper gear for success, although the reader is constantly surprised by those items and their significance.  Told entirely in dialogue, the meticulous selection of text gives us the soul of the story; a life and death situation, others trying to avert disaster, urgency, comedy and ultimately profound kindness and justice.  Here is a sample passage.

"In the meantime, we'll have tea.  Patience, Sherman, is the most important part of fishing."


When you look at the opened dust jacket your eyes are first drawn to the right, the front.  Set in a scrolled, glided frame, this moment conveys the height of the adventure.  Sadie stands stalwart holding her cup of tea, Sherman has the net at the ready, the monkeys are in various stages of rowing.  Two are completely unaware of the danger wrapping itself around them.  One is totally frightened.  A fourth monkey has spied something in the distance. You can almost hear the scream of the wind and the crash of the waves and feel the rain on your face.

To the left, on the back, those crazy monkeys are painting the very picture we have just seen.  Two are at the easel, one is screaming aloud, another is taking a picture, one is stirring paint in a can and the final monkey is painting the hat of the stirring-paint monkey.  In other words, it's mayhem.  Sherman and Sadie stand back and watch.  This is on a white canvas.  In this image, as in all the illustrations in this book, Matthew Cordell is a master with details.  Sadie is carrying her helmet, sipping a cup of tea.

While I received an F & G at NerdCampMI, I wanted to wait to talk about this book until the release date today because I knew the book case would be amazing.  And it is.  The background is a map, one of the maps used to find the goldfish.  Pencils, rulers, compasses and protractors are placed amid snapshots taken before, during and after the adventure.  Almost all of them are a close perspective.  The opening and closing endpapers are different in color which is significant, a sage green and pink.

Having the dialogue and Cordell's illustrations bring the reader to the title page is superb.  It leads us into the reappearance of the monkeys, who are never actually mentioned in the text but play a huge role in the pictures.  When we see them on the title page, they are playing instruments in the town square on and near a fountain.  Bananas are everywhere, thrown to them for their music.  This is important because as Sadie and Sherman prepare for the trip, the monkeys make payments for everything in bananas in the visuals.

You will stop at every page to look at all the elements placed there by Cordell.  You want to see what the monkeys are doing. (You will be laughing nonstop.)  You want to notice the expressions on Sadie's and Sherman's faces.  You don't want to miss the items included from the previous title.  Most of Cordell's illustrations span two pages but he uses single pages to showcase the pacing.

It is nearly impossible to select a single favorite illustration from many but when they first start to save the goldfish is certainly one of them.  To the left one of the monkeys (They are all dressed in sailor outfits with the hats.) is running frantically across the sand, left behind.  He has dropped a paint can and a balloon is drifting away.  The rain is starting to fall harder.  To the right the boat is heading out to sea.  Sadie is talking to Sherman as she rows.  Two monkeys are shouting at the third running on shore.  Another monkey is rowing.  Another is using binoculars.  At the front of the boat a monkey searches the sea with a spyglass.  The crow watches.  The fishing poles are being used for one of several surprises.  Sherman's hat has blown off in a gust of wind.

No matter how many times you read this title you will begin and end it with a smile on your face.  You will burst out laughing more than once.  Like the companion book, The Only Fish In The Sea written by Philip C. Stead with illustrations by Matthew Cordell highlights a character you can't help but admire.  Her steadfast friend and the wild monkeys make this book one you will want to own for your professional and personal bookshelves.  We can never have too many characters who have kindness direct their lives and fuel their bravery.

To discover more about Philip C. Stead and Matthew Cordell and their other work, please visit their websites by following the links attached to their names.  Here is another link to information about Philip C. Stead.  At the publisher's website you can view interior illustrations.  This book is mentioned in a post by author, reviewer and blogger Julie Danielson at Seven Impossible Things Before Breakfast.  The cover reveal was hosted by teacher librarian Matthew C. Winner at All The Wonders with a conversation.  Philip C. Stead and Matthew Cordell chat at Publishers Weekly KidsCast about this book.
Posted by Xena's Mom at 2:54 PM