One Little Bit Of Green

In tales of fairy there is always magic.  It presents itself in varying degrees.  These signs of enchantment are woven so adeptly into the main narrative, captivating readers; we suspend belief and accept them as truth.  Anything seems possible. 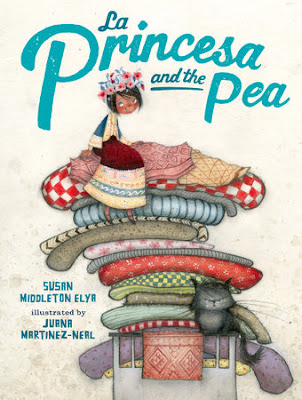 In most of these stories royalty figures prominently.  The personalities of those in power can range from wise and knowing to downright evil.  La Princesa and the Pea (G. P. Putnam's Sons, an imprint of Penguin Random House LLC, September 5, 2017) written by Susan Middleton Elya with illustrations by Juana Martinez-Neal presents us with a queen going to the extreme to make sure the quintessential bride is found for her son.  Shifting the setting to Peru opens a door into the beauty of another culture and the opportunity for a marvelous twist on the original Hans Christian Andersen story.

There once was a prince who wanted a wife.
But not any nina would do in his life.

His mother was making it difficult and he was lonely.  One day a young woman on her way to her castle asked if she could stay at the prince's palace.  It was love at first sight!  The prince knew he had found his lifelong companion.

The queen scurried to the garden, seeking a pea and scheming of a way to prove the young woman's worth.  She ordered twenty mattresses brought to the guest's bedroom.  They were all shapes and sizes.  The pea was placed on the bottom of the stack.  (While the workers labored this meddling monarch lounged and munched on candy.)

At breakfast the next morning the guest was not herself from lack of sleep.  (She must be a real princess to feel a pea through twenty mattresses deep.)  An overjoyed prince and his equally happy princess exchanged their wedding vows.  The queen reluctantly contributed to the merry marriage day, none the wiser.  Love finds a way to win.


Readers are attracted to a melody made by rhyming couplets.  When words in another language, Spanish, replace the English text it adds another layer to that melody increasing its richness.  Susan Middleton Elya elevates this classic tale using those two writing techniques.

We are transported to another world full of treasured tradition.  Small changes, and one big one, along with the conversations between the characters make this version one to remember.  Here is a sample passage.

The prince said "Come in," but his mother, la reina,
decided to test her.  Would this girl be buena?

Mama sneakd away
to the royal jardin
and found a small pea
that was fit for a queen.


One of the first things readers notice when looking at the opened dust jacket (I am working with an F & G.) is the array of colors and patterns on the mattresses and the clothing worn by the princess on the front, to the right.  They will also wonder about the happy look on the face of the princess in contrast to the scowling cat.  To the left, on the back, on a warm brown background with woven patterns from featured textiles, we see a scene from the book when the princess first asks to stay the night at the castle.  As on the front we see a distinction between the expressions on the couple's faces and the grumpy gaze the queen is giving the girl.

Readers will begin to wonder about the presence of guinea pigs beginning on the title page.  Juana Martinez-Neal starts to leave clues relative to the large twist in this variation.  With a page turn a breathtaking double-page picture gives us a panoramic view of golden rolling hills with a river winding through a valley.  Sheep and goats are grazing.  A llama carrying a load of wool stands near the princess on her donkey as she looks into the distance.  The dedication and glossary of thirty-seven Spanish words are placed here.

All of the illustrations rendered with acrylic, colored pencils and graphite on handmade textured paper span across two pages.  The heavier, matte-finished paper for the pages is ideal for the soft shading, delicate lines and intricate details made by Juana Martinez-Neal.  Humor is replete in the looks on the guinea pigs' faces.  Actually you need to look at all the faces of the people.  They tell little stories of their own.  Evidence of the area, Peru, in which this story is set, is seen in the marvelous woven fabrics, the looms, balls of yarn, and wool hanging on lines.

One of my many, many favorite illustrations is when the queen realizes the princess has passed the test.  This takes place in the kitchen.  To the right three large pans are hanging on the wall.  To the left we zoom in on the queen, grouchy frown on her face.  Her long single eyebrow matches her expression.  Covering her folded arms and shoulders is a hand-woven cape.  The hat she always wears has become a resting place for her cat, who is also looking disgruntled.  Safety pins are attached to the hat in no particular order.  The queen and the cat fill the entire page with a portion bleeding over the gutter.  They look so cranky you can't help but smile and cheer for the lucky bride and groom.


This beautiful variation, La Princesa and the Pea written by Susan Middleton Elya with illustrations by Juana Martinez-Neal, is my favorite version of this story.  These two collaborators have turned this tale into one to be cherished.  You will want to make room on your professional and personal bookshelves for this title.

To learn more about Susan Middleton Elya and Juana Martinez-Neal and their other work, please follow the links attached to their names to access their respective websites.  Juana Martinez-Neal also maintains a blog linked to her name.  You can view more images from the title there.  At the publisher's website you can view the title page.
Posted by Xena's Mom at 7:19 PM