A Message Meant For You

As you wind through the woodland paths hiking with no particular destination in mind, it suddenly appears like a signal among the forest flora.  The bright white is hard to miss.  You've been told to never touch it when it's attached to a tree but now it's a gift left for you to treasure or use.  Aptly named, the bark of the paper birch is akin to pages in a composition notebook, waiting for words.  It presents possibilities. 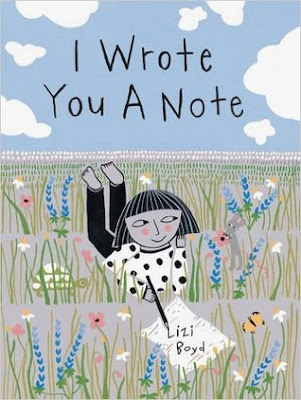 This opportunity is like a question, what will you do with what you have?  I Wrote You A Note (Chronicle Books, June 13, 2017) written and illustrated by Lizi Boyd follows the journey of a message sent.  It considers potential based upon perspective.

I wrote you a note.
Did you find it?

No, the note is not found by the intended recipient but Turtle found it.  Did he read it?  No, he did not but he used it as a sail for his log-style raft.  It started to go faster than he was accustomed to going, so he swam away.

Then Duck discovered the note.  Her ducklings were tired.  A dock would be nice.  Spider needed help crossing the stream.  Bird wanted to strengthen her nest.

The note drifted to six more creatures of forest and field.  Each time they found a unique use for it.  Once it was a book.  Another time it was a sun hat.  It was even a napping tent.

Finally the wind found it.  It rose high in the air, moving about on the currents like a gymnast.  When it landed, a request was fulfilled.


Like the note written by her character Lizi Boyd sends an invitation to readers to participate in the narrative as it unfolds.  She creates a welcoming beat with the question

Did you find it?

followed by the three animals who did find it.  When she precedes

with the name of an animal, we wonder what they will make.  We wonder why they leave their newly designed object.  Here is a sample passage.

Squirrel found the note.
He folded it in half
and made a book.
But squirrels don't
sit still for very long.

Squirrel dropped
the book and
scampered up
the tree.


Looking at the opened dust jacket the scene from the front continues on the other side of the spine.  The rows of delicate flowers and grasses provide comfort for five of the animals who find the note.  It's a nice design element to have the girl writing Lizi Boyd's name on the birch bark.  Also by having the girl wear black and white clothing it's a reflection of the black ink on the white birch bark.  The color palette seen on the jacket is continued throughout the book with the addition of other spot colors.

The book case is like a piece of birch bark.  The only thing on it is the title text on the front, to the right.  The opening and closing endpapers are a pattern of grasses like at the top of the dust jacket prior to the sky.  They are done in blues, greens, white and gray.  On the title page the blue bird is carrying the piece of bark with the text on it. Prior to the first page and after the final page, a page is devoted to the replication of birch bark.

With the exception of the first and last pages all of the other pictures span two pages.  Parts of the pattern on the endpapers are woven into each image.  The tiny details supply a form of symmetry which in turn generates calm.  Readers will note a portion of the next animal to find the note is placed on the previous page.  This is a fine example of foreshadowing and suggests that readers make predictions.

Rendered in gouache each brush stroke is placed with painstaking care.  Other animals are added to most of the scenes; a honeybee, a frog, a salamander, a woodpecker, blackbirds, a butterfly, a grasshopper, and a caterpillar.  Each picture is a study of a natural setting.

A favorite picture of mine (of many) is of Duck using the note to make a dock for her tired ducklings.  On the left along the bank of the stream, Turtle from the previous page is moving from behind a rock in the background.  To the right in the background the girl is observing a spider web in the grass.  In front of her the small head of a frog is peeking from behind a rock.  Along the bottom the stream stretches from page edge to page edge.  Duck is swimming on the left with one duckling.  The other two are on the piece of birch bark on the right.


Readers, who enjoy titles which expand their thinking, stretching the "what-if", are going to read I Wrote You A Note written and illustrated by Lizi Boyd again and again.  They will pause at ever page turn to take pleasure in each illustration.  This book would be wonderful to explore letter writing, perspective, how certain animals might view a piece of birch bark and as an exploration of the natural world.  Who will you meet?  You will most definitely want a copy of this title on your personal and professional bookshelves.

To learn more about Lizi Boyd and her other work, please follow the link attached to her name to access her website.  If you wish to see an inside spread please visit the publisher's website.  Lizi Boyd is featured at PictureBook Makers.  Several other posts highlight the work of Lizi Boyd during the release of her title, Flashlight.
Posted by Xena's Mom at 11:27 PM