Heed The Cry Or Catch A Fly

It all comes down to the focus of their attention.  When you work with younger children, sometimes their concentration seems to be superficial; easily distracted by the least little thing (like a flock of wild turkeys crossing the playground during story time.) Other times a brass band could pass by them and they would not even look.  They remain riveted to whatever it is they are watching, hearing or doing. 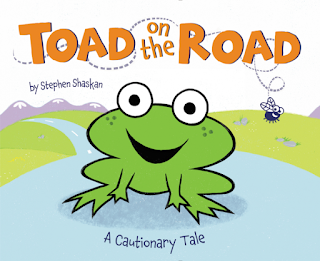 In this second scenario you might momentarily grab a glance but they make a choice to continue their current fascination.  Toad on the Road: A Cautionary Tale (Harper, an imprint of HarperCollinsPublishers, May 16, 2017) written and illustrated by Stephen Shaskan is about a similar situation.  When an amphibian happens to hop on a thoroughfare, it had better beware.

This toad captivated by a buzzing fly is about to be joined by a traveler, a very large traveler unable to slow his mode of transportation.  Yikes!  It's a bear riding a bicycle.  A tremendous crash echoes on the highway.

The bear with the destroyed two-wheeler warns the toad to get off the road.  He even asks the rascal what his mother would tell him to do.  Does the little imp listen?  He does not.  Buzz. Buzz. Buzz.

Then a car and a van, one after the other, driven by equally alert individuals follow the same route.  The small green scamp is strongly advised to move and move quickly.  Both times a racket booms through the air.  There are now three bent and broken, flipped and fragmented vehicles in a pile.

Where is the toad you ask?  He's still on the road!  Here comes a truck heading straight for the happy hopper.  With a comical twist, the tale comes to a surprising conclusion.


Author Stephen Shaskan writes with complete confidence in what his intended audience will enjoy.  The rhyming and repetition give us no other option than reading or singing the lines aloud.  They are loaded with liveliness and laughter.  As each animal moves on down the road, only the exclamation is changed to rhyme with them and their vehicle.  Here is a continuation of the first set of phrases.


When you first look at that toad on the road on the front of the matching dust jacket and book case, you have to laugh or at the very least smile.  His grin draws you into his great mood.  And look at the fly.  He's smiling too!  The scene on the right continues to the left, on the back.  In silhouette the three vehicles with their drivers are shown moving along the highway in the distance.  It's a prelude to hilarity.  Toad green covers the opening and closing endpapers.

With a page turn we see a loop-de-loop trail of the fly buzzing over the tip-top of the toad's head and eyes, looking upward.  On the verso the toad is leaping after the fly as he buzzes around and through the title text on the opposite page.  They both look so happy you can almost hear them giggling.

All of the images, rendered digitally in Photoshop, by Stephen Shaskan span edge to edge across two pages.  As each episode unfolds the perspective moves from farther away and then closer to the toad and the traveler followed by the ensuing pandemonium.  The complete "que sera sera" attitude displayed on the face of the toad contrasted with the looks of dread on the drivers' faces provides loads of comedy.  Readers will also have a ton of fun watching the toad and fly playing; the flight patterns of the insect and the body postures of the toad are full of humor.

One of my many favorite illustrations is when the van is coming down the road right at the toad.  Off to the left, the bear and croc are watching horrified.  The bear wearing the small red bicycle helmet and the croc wearing his top hat are gasping, wide-mouthed.  The croc has a front foot up to his mouth.  The bear is pointing too frightened to look. Their expressions are hysterical.


Once you read Toad on the Road written and illustrated by Stephen Shaskan aloud, expect multiple requests to read it again.  It will be hard for you and your listeners to not start singing the tale.  It's got a beat that pleads for this kind of play.  You will probably want to use it for reader's theater too.  I highly recommend you get copies for your professional and personal bookshelves.  (I think toad on the road will be winding through my mind for days.)

To learn more about Stephen Shaskan and his other work, please visit his website by following the link attached to his name.  Enjoy the book trailer premiered at Scholastic's Ambassador of School Libraries, John Schumacher's blog, Watch. Connect. Read.  It's a real toe-tapper and hand-clapper.
Posted by Xena's Mom at 12:22 PM