On March 1, 2016 Dario and the Whale debut picture book by author Cheryl Lawton Malone with illustrations by Bistra Masseva was featured here.  At the close of a question and answer conversation with Cheryl it was revealed another book similar in theme to Dario and the Whale was being written.  I am honored and excited today to be revealing the cover for Elephants Walk Together created by the collaborative team of author Cheryl Lawton Malone and illustrator Bistra Masseva and published by Albert Whitman & Company.  Both Cheryl and Bistra have agreed to answers questions about this new title prior to and after the reveal.

It’s indeed a pleasure to have you both back at Librarian’s Quest.

Are the elephants in this book based on a true story?  If so, how did it come to your attention, Cheryl?

Cheryl: Yes, that’s the part I love the most. ELEPHANTS WALK TOGETHER is inspired by the amazing lives of two real Asian elephants named Wanda and Gypsy. Like the majority of elephants in captivity today, Wanda and Gypsy were captured in the wild. At some point they were sold to the same circus. Film clips show them performing together. Their story turns extraordinary, when, after decades of separation, they reconnect at the Performing Animal Welfare Society’s (PAWS) elephant refuge in San Andreas, California. In real life, as in my story, they spend their remaining days walking side by side. Wanda died in 2015 from complications related to chronic captivity. To date, Gypsy is still roaming the reserve with her other elephant friends. I first heard about Wanda and Gypsy when my agent, Clelia Gore at Martin Literary Agency, asked me to watch an HBO documentary titled An Apology To Elephants. Wanda and Gypsy are featured in the film. The elephants’ historical facts and video are also published on the PAWS website. Clelia believed the plight of captive elephants could be brought to children in a heartfelt and appropriate way. After I discovered Wanda and Gypsy, I agreed!

I know, Bistra, in your comments regarding your art for Dario and the Whale that as soon as you get a manuscript images start to form in your mind like frames of a film.  Was it the same for Elephants Walk Together? Did you imagine the elephants first or the scenes in which they are placed?

Bistra: That's right. I can't seem to read a text without my visual thinking being switched on. Sometimes, it's just a word that can kick things off. I often know exactly how I'd like an illustration to look, however sometimes I'll just go with the flow and let the work emerge from the sketches.

Getting the characters right is very important. They guide you through the story. In this book my challenge was to create two elephants of the same species that are distinguishable from one another. In the illustrations they differ slightly in colour and Precious has freckles on her trunk, whereas Baba has them only on her ears.

What is the medium you used for the artwork, Bistra?


Bistra:  I used acrylic paints as I do in most of my art.


Would you talk a little bit about your research process, Cheryl and Bistra, for Elephants Walk Together.  Were you able to conduct most of it online?  Did you speak or consult with elephant experts?  Were you able to see elephants in person?

Cheryl: The HBO documentary highlights the poor treatment and difficult living conditions endured by captive elephants in North America. The material was so intense I spent months noodling over approaches and story lines before I realized the friendship of Precious and Baba offered the perfect vehicle for telling this story. After that, I began reading everything I could about the life and care of captive elephants, including psychological studies, the use of training devices like bullhooks, medical reports, and articles about poaching and conservation efforts. I relied heavily on the PAWS’s website and their suggested reading material, as well as information published online by metropolitan zoos and the Association of Zoos and Aquariums, an organization devoted to the advancement of zoos and aquariums in the areas of conservation, education and recreation. I even traced the individual histories of Wanda and Gypsy in the Asian Elephant North American Region Studbook—an online publication that strives to provide complete and accurate origin and transfer data about all Asian elephants held in zoos and private collections. Unfortunately, I was not able to meet the elephants myself.

Bistra:  I actually first got acquainted with elephants as a little girl, during an extended stay in India.  I still remember being in awe of these funny-looking giants.  And then, years later, I went to the zoo to sketch elephants for a University assignment.  Observing a subject in real life and its natural habitat is the best visual research method.  That is not always an option obviously, but luckily there is a wealth of information online on elephants nowadays.  I looked through a large number of pictures and some videos to acquaint myself better with elephant appearance and personality.  And I made a lot of sketches.

With the reading of each new article or book, my fascination continues to grow regarding the emotions displayed by animals.  Their connections to each other and to humans in their lives are extraordinary.  Do you Cheryl or Bistra have another story about elephants which you find intriguing?  About any other animals?

Cheryl: Elephants are so intriguing, and so human-like in their family connections, interaction, grief, and care-giving that I find myself sharing videos of elephants on social media whenever possible. My current focus and writing efforts, however, have shifted to another fascinating, endangered species—wolves!


Bistra: I think stories like this one teach us to be more aware and accepting of others, be that people or animals. We share this earth with so many amazing creatures. We should learn to be more respectful of what we don't understand or know little of. How we treat one another is what distinguishes us. 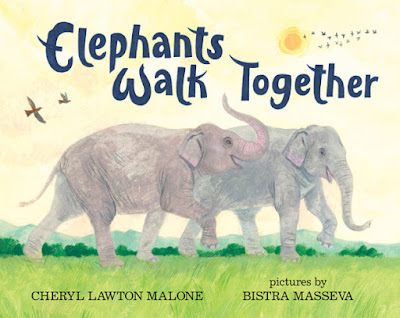 Would you speak a little bit about the particular illustration on the cover, Bistra?  Why did you choose to show the elephants as older adults rather than as babies in the wild?  Did this cover go through many revisions?

Bistra: Baby elephants are adorable, but on the book cover I wanted to show the passage of time and also suggest that the elephants go through a lot of trials and tribulations. They are symbolically leaving hard times behind them and walking towards freedom and sunnier skies, together. This was my concept from the start and the final art matches my initial sketch.


I was wondering Cheryl about your impression when you saw the front cover illustration for the first time?

Cheryl: Quite simply, I fell in love. With their pink and gray skin tones and trumpeting trunks, the elephants look ready to march off the page. In one illustration, Bistra captured the soul of an extraordinary story. The interior art amazes as well.

Now we readers need to wait for the release date on October 1, 2017 to discover the story of two remarkable elephants, Precious and Baba, in Elephants Walk Together.

Cheryl Lawton Malone and Bistra Masseva have my sincerest thanks for creating this book which will certainly increase readers’ appreciation of the marvelous creatures we call elephants.

Started in 2012 for the past five years around the globe we have been celebrating World Elephant Day on August 12th. You can learn more about how PAWS views this event here and be sure to visit the PAWS's section dedicated to the elephants.
Posted by Xena's Mom at 12:30 AM