That Canine Classmate Is Back

Having a dog as a schoolmate is the most natural thing in the world for students at Champlain Elementary.  When Bailey (Scholastic Press, August 2011)(review here) written and illustrated by Harry Bliss was introduced to readers, I can imagine them wishing they could attend class with this comical four-footed, furry student.  Never a dull moment tops the agenda of days spent with Bailey. 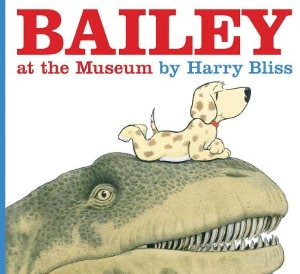 In this companion title, Bailey at the Museum (Scholastic Press), Harry Bliss places his canine character with his school chums on a tour of the Museum of Natural History.  Field trip fun is in the offing.  Miss Smith, the epitome of Educator of the Year, is one very calm (usually), patient lady.

No one is more elated about this new adventure than Bailey.  Tail wagging like brushes in a car wash, Bailey can hardly await to arrive.  With instructions to select a buddy and stay in...Bailey...what are you doing in the fountain?

All begins well until the group, lead by the museum guide, stands before the bony Tyrannosaurus rex.  Bones plus dogs equals sheer satisfaction except in a museum exhibit.  Shouts, gasps, and one guard with a ladder saves the day and the dog.

Touring with Bailey is his new partner...you guessed it, the guard.  Lunch is a bonus for Bailey; the guy has a huge heart.  Doggy kisses are the dessert of the day.

From the Stone Age to the Native American exhibit complete with a totem pole, artifacts and a tepee the visit continues.  Wait a minute...where's Bailey?  He's snoozing away inside until the clever guard utters the one word all dogs jump to---SQUIRREL!

Despite their scurrying the class has disappeared.  But everyone knows, no nose is like a pooch's nose.  Rescued becomes the rescuer and a friendship is forged.


Harry Bliss uses one or two short, simple sentences for each of his illustrations as his narrative text.  Interspersed in his visuals are Bailey's thoughts in speech bubbles as well as other character's thoughts and dialogue which are similarly shown. It's in these additions readers are enticed to participate in the story and love being there.  While seeming to be as human as the other students Bailey's actions and unspoken words are all dog.  Hilarity abounds.

Museum guide:  Clown fish have orange and white coloring and live in reefs.

Bailey:  I wonder if they miss the circus?


According to an interview given at Seven Impossible Things Before Breakfast on April 2, 2009, Bliss states his usual medium is black ink and watercolor, having mastered this technique and created his own notable style over the course of his career.  A sense of movement is prevalent throughout the book with the alteration in perspective, extent of the illustrations on the pages (size), use of white space and Bailey's ever present tail wagging merrily.  The jacket and cover art, like the narrative, give readers a hint of Bliss's keen sense of humor. On the back Bailey is shown peering from behind an ancient vase encased in glass.  Pictured on the vase is a toga-wearing dog chasing a squirrel; bones completing the design at the top.

Attention to detail invites readers to pause or reread.  On the school bus a student is reading The New Yorkshire while others read graphic novels and chapter books.  On the guard's ladder is Warning: No Dancing.  Beneath the progression of mankind painting hanging on the wall is the class walking in a line--guard, Miss Smith, students, tallest to shortest, with Bailey leading.  The comparison is grin-worthy.


The combination of Harry Bliss's wit and artistic talent gives readers another grand episode in the life of this irresistible dog who loves school and everything it includes.  Bailey at the Museum is one trip you won't want to miss.  After all, he's just your average student...with a tail, paws, big black-tipped nose and a bright red collar.  This guy has captured my heart.

For another more recent interview of Harry Bliss follow this link.