How High Can You Go?

Growing up I spent many an hour in a small aluminum boat fishing with my Dad.  It was always a marvel to me (and still is today) how something as thin, fine, as fishing line could be so strong.  Sometimes if the light were just right, it was invisible until the gentle breeze would shift our boat. 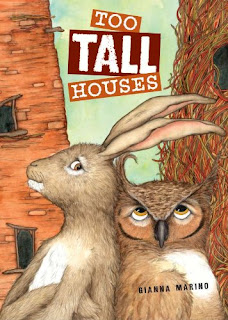 The thread that binds friends together is somewhat like fishing line; strong but mostly invisible.  Depending on the situation the line will loop down when all is well or grow taut almost to the breaking point when trust or affection are tested.  Gianna Marino, author of Meet Me at the Moon (Viking, March 2012)(reviewed here) has written and illustrated a brand new title, Too Tall Houses (Viking), released September 2012.

Rabbit and Owl lived in two small houses on top of a hill.

With their houses side by side Rabbit and Owl are more than neighbors, they are friends.  Rabbit gardens filling his space with sun-loving vegetables.  Owl takes great pleasure in gazing into the distance at the forest.

All is well day and night until Rabbit's crops grow a bit too tall, blocking the vista Owl so loves.  Rabbit doesn't know what to do.  After all, he needs to eat.

Owl flies in with more branches and more branches building his house taller, so when he sits on top he can see what he wants to see. He's one happy bird now but Rabbit is a tad bit peeved.  His sun-loving vegetables are in the shadow of the newly heightened abode.

Not only does Rabbit build his house taller but he plants more food on his roof.  Oops!  When he waters, it goes on Owl's head.  Guess who builds his house even taller?  Yes, the feathered friend is  farther up.

Not to be outdone, the harried hare hauls in more dirt, putting a fence around the garden on what is now the tallest house.  And so it goes, there is no more tending of the garden or looking at the woodlands.  These two are in a competition until their homes are towering above the earth.

Swaying in the strong breezy atmosphere they both express their dismay at no longer being able to do that which they love most.  The wily wind takes matters into its hands.  Brought down to earth they realize they have exactly what they need.


Simple words build simple sentences but it's the word choices which give depth to this story.  Gianna Marino spins a narrative using expressive verbs that most definitely set the tone for this rivalry gone wild.  She even gives voice to the wind,

Way up high,
the wind roared and bellowed,
Whoosh!
Crreeeaaakkkkk...


Using Fabriano Artistico paper, gouache and pencil, Marino creates illustrations with intricate detail, a subtle softness engaging readers at every turn of page.  Beginning and closing endpapers portray changes seen within the story.  Pacing is perfected through the use of two-page spreads to single page and then back to double-page visuals.

An overlying glow radiates from her choice of colors, subdued and earthly.  Close inspection by readers sees Rabbit drying peppers on a "clothesline" with each vegetable in his garden carefully labeled with tiny markers.  As his house grows so does the elaborate gardens built into his structure.

Both of the characters, Rabbit and Owl, speak volumes with their eyes.  Readers will laugh aloud at the total disgust on Owl's face when water is poured on his head or when Rabbit has a tantrum jumping up and down.  Gianna Marino's illustrations truly compliment and enhance the text.  When she extends the final sentence across the final five pages, it is masterful, a marriage made in heaven between words and pictures.


Too Tall Houses written and illustrated by Gianna Marino is a marvelous story of friendship tested and found true.  It's about not knowing when to stop and the beauty of second chances.  The truly exquisite illustrations have garnered this title a spot on my Mock Caldecott list.