Yes, I'm talking about the wolf.  Oh, he's shifted shape from time to time; a coyote, a shark, a big-bottomed boar, a wrecking ball, an eagle, a tyrannosaurus and in a real switcheroo, a pig.  To be sure, he's struck terror in many a critter's (truck's) heart. 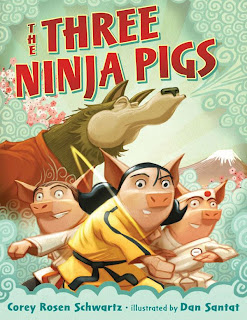 This time, though, from the get-go, he's met his match.  He's huffed and puffed one too many times.  The Three Ninja Pigs (G. P. Putnam's Sons, September 27, 2012) written by Corey Rosen Schwartz with illustrations by Dan Santat gives this fairy tale a fun, feisty flip.

Once upon a dangerous time,
a wolf loved to huff and to puff.
He'd go around town
and blow houses down
till three little pigs cried,
ENOUGH!

This trio, two brothers and their sister, know what to do--Ninja school.  Two weeks of basic aikido for Pig Number One has him bored, without knowing the score. Not nearly enough learning jujitsu by Pig Number Two nevertheless has him pumped with bravado, going out the door.  Months go by as Pig Number Three perfects every stance, legs and arms moving in a flawless karate dance.

All believe they're ready until you-know-who comes a howling.  A fist hits air, a foot gets stuck.  Pigs One and Two have run out of luck.  As they scuttle to safety, Pig Number Three definitely needed, greets Mr. Wolf with a stare and a dare, a warning to be heeded.

As she whirls and dips to demonstrate, the foolish lupine is unafraid.  It's the final fierce chop that makes him think and stop.  Though fractured, this story of the fairy-tale three ends better than well; the ending....I'll never tell.


If you close your eyes and listen to the rhyming words, Corey Rosen Schwartz has created a rhythmic text not unlike the various moves made in the martial arts studied by her porcine protagonists.  Never faltering in the flawless flow, she presents an original setting, a strong female figure appreciated by two, less productive brothers and endless action.  With dialogue reflective of the culture and customs as well as character traits, this narrative never misses a beat.


From cover to cover (jacket flaps, too) Dan Santat, using Sumi brush work on rice paper with completion in Adobe Photoshop, superbly portrays the essence of the country in which this tale is set with a vibrant color palette.  Beginning and closing endpapers feature a panoramic view of mountains, a field, a bamboo forest and a groove of cherry trees in which the characters's homes, the Ninja school and town is located.  The theme continues as the dedications are shown on scrolls opposite the Three Pigs in meditative poses beneath the title.

The first two page spread, of ten, pictures the larger than life wolf blowing houses down as a lighter background for the Three Pigs raising their arms and voices in outrage.  This initial scene sets the tone for the entire story; expressive facial features, proper attire and bodies in explosive motion.  Altering perspective, inserting smaller visuals within a larger illustration, and odd shaped panels increases tension and brings the story right to the reader. No detail is overlooked; a Japanese crane as one of the animals in the aikido studio.

When you combine the talented writing of Corey Rosen Schwartz with the signature artwork of Dan Santat there is only one word to describe the fractured fun of The Three Ninja Pigs---KIYA!

For more information on both Rosen and Santat please go to the embedded links in their names above to view their websites.  Both were interviewed separately about this title on the blogs of the dynamic reading duo, Mr. John Schumacher and Mr. Colby Sharp.  To read the interview of Corey Rosen Schwartz follow the link attached to Mr. Schu's name.  Dan Santat's interview can be read by following the link in Mr. Sharp's name.