The best kind of biography is not a dry compendium of a person's existence but an awakening; it's making them alive for today's readers and paying tribute to what made them who they were.  It is the result of years of research on the part of both the author and the illustrator.  Each of them know the person so well they live, however briefly, in the person's skin. 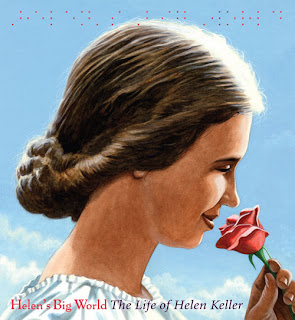 One of the most consistently popular historical figures is Helen Keller.  Justifiably, admiration for her accomplishments has never lessened with readers, no matter their age. Helen's Big World (Disney-Hyperion Books) is the third collaboration between author, Doreen Rappaport and illustrator, Matt Tavares.

Helen gurgled and giggled in her crib.  At six months, she crawled and said, "How-d' ye," and "wah-wah," for water.

Until she was nineteen months old Helen Keller was much like any other child, dearly loving the company of her parents.  Then a puzzling illness took away her ability to see, hear and speak.  Making sense of this change was beyond her young capabilities.

Five years passed before her teacher and companion, Annie Sullivan, entered her life.  With patience, persistence and firmness, Annie would spell words on Helen's palm, teach her social skills, and to use her fingers as eyes and ears, feeling what she could neither see nor hear.  Under Annie's tutelage, Helen learned to write, gaining her notoriety at the age of eight.

Learning to read on her own with Braille, outdoor adventures on land and sea in all seasons, lip reading by touch and graduating from college with honors were all milestones met by Helen. With Annie, all things were possible for this young woman.  Most people might have stopped growing at this point but not Helen.

Now that Helen had a voice she used it; championing for peace, labor rights, women's rights and civil rights.  Readers follow her and Annie, marveling at two lives well lived.  From birth to death the more Helen learned the larger her world became... as did the worlds of those whose lives she touched.


Reading what Doreen Rappaport has written about Helen Keller is like being Helen's shadow.  She has chosen to share significant moments in a vivid and personal manner.  After each narrative segment, in a bolder and larger font, beneath is a quotation made by Helen which directly correlates.

When her parents pressed her close,
she knew their smell and touch.
But she could not see them or hear them
or say their names.

"In the dreary month of February
came the illness which
closed my eyes and ears.
Gradually, I got used to the silence
and darkness that surrounded me."


Using watercolor, pencil and gouache Matt Tavares recreates stunning images of Helen Keller, allowing readers to visually experience those events in her life that held great importance.  The jacket and cover identical in every aspect except one, the Braille on the jacket is raised, focuses on Helen's pleasure in using those senses she did have.  It's interesting to observe as the story nears its end, Annie Sullivan's death noted, he pictures an older Helen, again holding roses to smell, but she is facing in the other direction.

Both sets of endpapers use a soft spring green as a background.  The opening illustration is a close-up of Annie spelling out the word "water" in Helen's right palm as the other catches and cups a stream of water.  The Manual Language Chart is featured on the closing two pages.  Featuring hands on both sets of endpapers further emphasizes their value in Helen's world.

Across the two pages for the title Tavares pictures Annie and Helen, hands clasped, jumping in the the sea so well you can almost hear the waves rolling and crashing.  All the remaining illustrations cross the gutter bleeding to the pages' edges, sometimes with a large white section holding the text or with the text tucked within the visual.  His color palette enhances the emotions of the text; joy, sadness, frustration, anger, patience, perseverance, discovery and dedication.  My favorite illustration is of Helen seated in the crook of a tree branch, clouds of pink blossoms surrounding her, as she faces toward Annie standing among the branches on the ground.

Helen's Big World:  The Life of Helen Keller adeptly written by Doreen Rappaport with illustrations rendered beautifully by Matt Tavares highlights the life of a woman who made a difference in our world; her passion for life captured by their passion for her.  This title is biography at its very best.  An author's note, an illustrator's note, important dates, and selected research sources are included at the book's end.

The Braille at the top of the jacket and cover spells Helen's Big World.